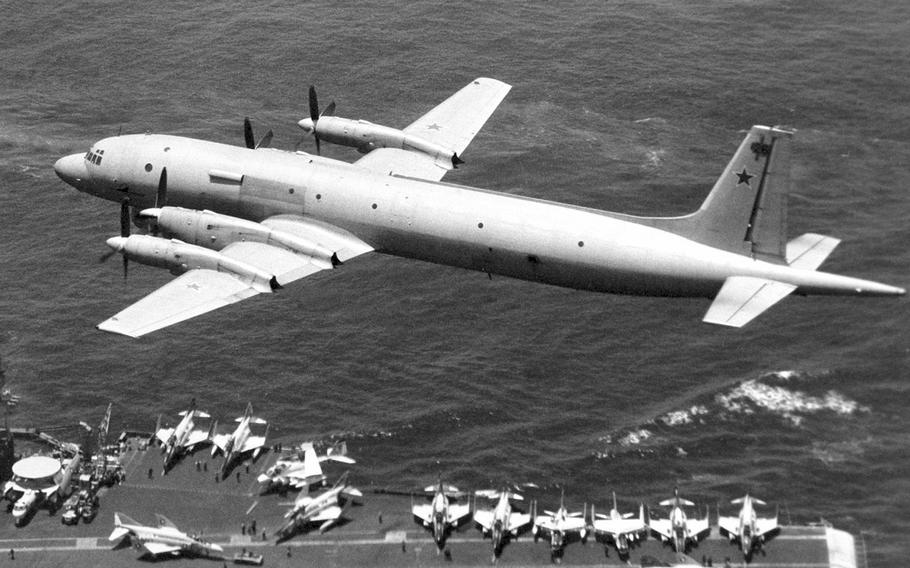 In a May, 1979 photo, a Soviet I1-38 May reconnaissance and anti-submarine warfare aircraft passes low over the flight deck of the aircraft carrier USS Midway. (U.S. Navy)

WASHINGTON — U.S. Air Force F-22 fighter jets intercepted a pair of Russian maritime patrol planes some 50 miles off the western coast of Alaska’s Aleutian Islands on Wednesday in what military officials believe was a test of U.S. capabilities amid the coronavirus pandemic.

“We are and will continue executing our no-fail homeland defense missions with the same capability and capacity we always bring to the fight,” he said in the prepared statement.

Russian military aircraft routinely, including nuclear capable bombers, fly close to American airspace to observe U.S. military training or test air defenses. O’Shaughnessy said Thursday that its the latest of several such incidents in the past month.

The United States, too, regularly flies missions near Russian borders on reconnaissance and other missions.

The F-22s intercepted the IL-38s on Wednesday after they entered the Alaskan Air Defense Identification Zone, which extends about 200 miles off Alaska’s coast. American and Canadian aviation authorities expect aircraft to identify themselves when entering the zone for national security purposes. U.S. and Canadian airspace extends 12 miles from the countries’ shores.

U.S. officials have said they expect to see Russian aircraft testing NORAD more often as the competing nations increasingly deploy military assets into the Arctic region. A defense official on Friday said Russia also will likely test American defenses to determine whether the coronavirus is plaguing the military’s ability to respond to such patrols.

Army Gen. Mark Milley, the chairman of the Joint Chiefs of Staff, on Thursday warned other nations not to underestimate the capabilities of the U.S. military even as it deals with the pandemic.

“The U.S. military is a very, very large capable force in all domains … [and] our [combat] readiness is still very high,” the general said during a town hall event from the Pentagon. “No one should doubt the readiness of the U.S. military to respond and defend the American people, if required.”