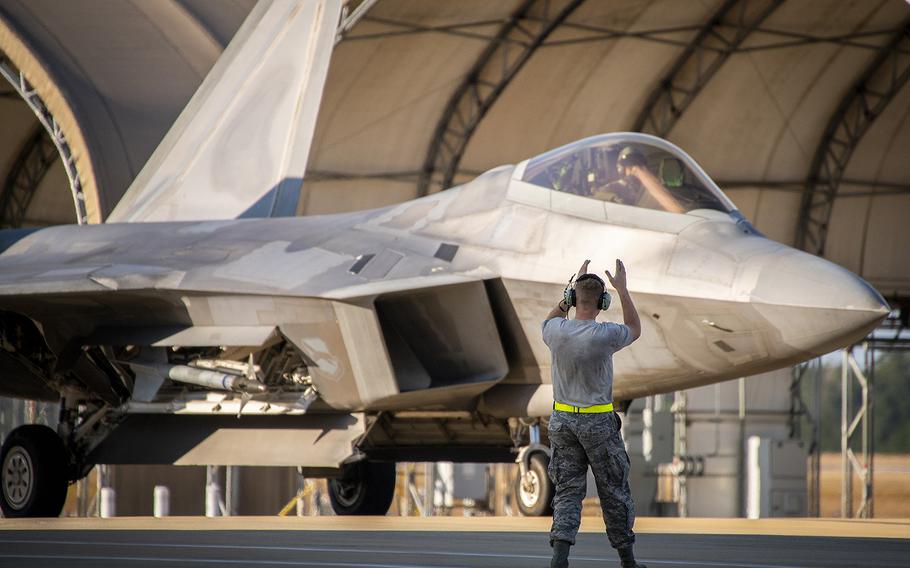 A maintenance airman guides in a 325th Fighter Wing F-22A Raptor at Eglin Air Force Base, Fla., Nov. 20. The first six Raptors arrived to their temporary home at Eglin from Tyndall Air Force Base. This move is part of mission shift by the Air Force as Hurricane Michael recovery efforts continue at Tyndall. (Samuel King Jr./U.S. Air Force)

WASHINGTON — Six F-22 Raptor aircraft from the 325th Fighter Wing out of Tyndall Air Force Base have moved to another western Florida base to continue its training mission after Tyndall was devastated by Hurricane Michael more than a month ago, according to service officials.

During the next four months, the wing’s 43rd Fighter Squadron will have 28 F-22s arrive at Eglin Air Force Base as well as about 525 personnel -- primarily maintenance and pilots -- who will come from Tyndall, according to Eglin spokesman Andrew Bourland.

The six F-22s, which moved last week, will begin flying from Eglin on Tuesday.

Most of Tyndall’s estimated 55 F-22s were able to move to other bases before the storm, though several of them were damaged when they were left in hangars at the base because they were in various states of maintenance. The last three F-22s that remained at Tyndall since the storm flew to Langley Air Force Base in Virginia on Nov. 16, according to Air Combat Command.

Tyndall Air Force Base took a direct hit from Hurricane Michael, a Category 4 storm on Oct. 10. It caused widespread devastation to the installation and the recovery effort is still ongoing to get operations there up and running again. Some roofs are still being repaired across the base and buildings are undergoing mold remediation with dehumidifiers. Along the base’s flight line, hangars have large sections of roofing gone and several buildings had collapsed.

It has not been decided whether the F-22s will return to Tyndall permanently, Air Force Secretary Heather Wilson told reporters in a Nov. 2 conference call, Military.com reported.

The simulator will be functioning at Tyndall within the next couple of weeks, according to Hawkins, and students will be back there training by early December.

One of the reasons that the F-22 training was moved to Eglin is so they could continue to use the same air space, according to Hawkins. Eglin is more 60 miles west of Tyndall.

Other units from the 325th Fighter Wing at Tyndall that will move to Eglin indefinitely are: the 2nd Fighter Squadron’s T-38 adversary training unit and the 372nd Training Squadron, Detachment 4, Wilson has said. The F-22s from the wing’s 95th Fighter Squadron have also been moved to Joint Base Langley-Eustis in Virginia, Joint Base Elmendorf-Richardson in Alaska and Joint Base Pearl Harbor-Hickam in Hawaii to continue their operations due to insufficient infrastructure at Tyndall.