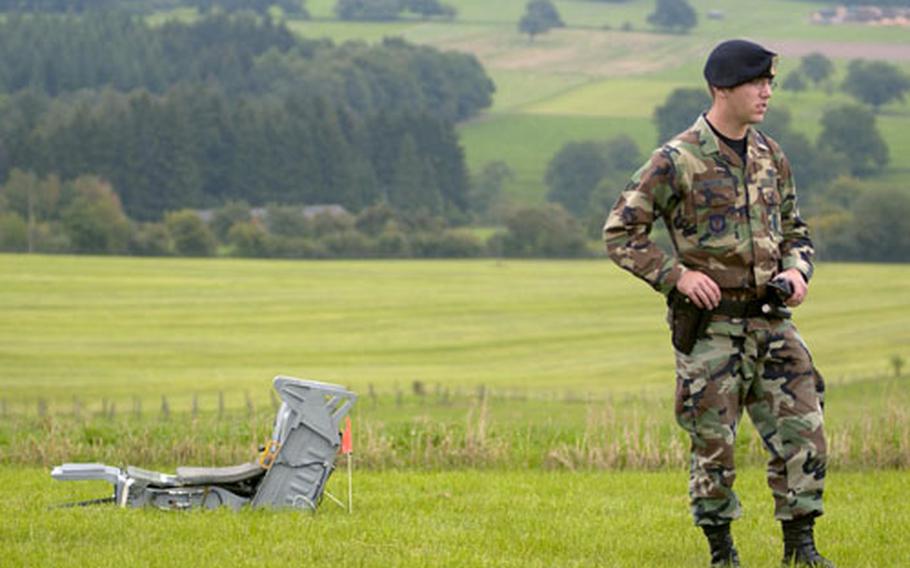 OBERKAIL, Germany &#8212; An Air Force F-16 fighter crashed near Spangdahlem Air Base on Thursday, but the pilot safely ejected near a small German village four miles from the airfield.

The pilot reported experiencing a problem with his landing gear while he was flying a routine training mission, said Col. Darryl Roberson, the 52nd commander. The pilot tried to fix the problem with the help of experts on the ground, but the plane ran out of gas and he decided to bail out.

The pilot, whose name and rank have not been released, landed in farmland right outside the village about a mile from where the plane plowed into the edge of a tree line. The canopy and ejection seat fell near a country road just outside of town.

He escaped with only scrapes and abrasions and was being evaluated at the base clinic. No one on the ground reported any injuries due to falling debris.

In the wake of the accident, all planes at Spangdahlem have been grounded indefinitely, officials said.

The pilot and airmen on the ground made an attempt to fix the gear problem while he was flying. They had enough time for airmen at the base to call Lockheed Martin in the United States to see if they could make a last-ditch effort to fix the malfunction so the pilot could land. But as the aircraft began to run out of fuel, the decision was made to bail out of the plane in a safe area.

Commanders at Spangdahlem conferred with the plane makers &#8220;to make sure that we could do everything we possibly could to fix this airplane,&#8221; Roberson said. &#8220;Unfortunately, we weren&#8217;t able to before the jet ran out of gas and was forced into a situation where he had to do a controlled bailout.&#8221;

Air Force firefighters and police rushed to the scene. They worked alongside German emergency workers and law enforcement authorities. Police set up a 5,000-foot cordon around the crash site for safety. Late Thursday, airmen set up floodlights so crews could work at the scene through the night.

The village, which is surrounded by cow pastures and a few cornfields, is home to many airmen and their families who work at the base. More than a dozen residents, some on foot and bike, tried to get as close as they could to get a peek.

The fighter was not armed with weapons when it crashed, Crosson said. Air Force investigators arrived shortly after emergency crews and were working to learn what might have caused the gear malfunction.

It appears the pilot did everything he possibly could and followed standard procedures, Roberson said.

&#8220;It was a control setup and the pilot was doing everything right, bailed out and &#8212; fortunately &#8212; everything worked and he made it safely down to the ground and the aircraft ended up right here,&#8221; he said.

The last aircraft crash in the area happened four years ago. On March 20, 2002, an F-16 from the wing&#8217;s 23rd Fighter Squadron crashed in a wooded area near the base. Pilot Capt. Luke Johnson died in the crash. An accident investigation blamed pilot error.

U.S. military crashes in Europe since 2001

On the same day, Air Force Capt. Kirk Jones and Lt. Kenneth Hyvonen with RAF Lakenheath&#8217;s 48th Fighter Wing are reported missing after their F-15C fighter jets crash into a mountain in the Scottish Highlands. The remains of the pilots are found about a week later.

July 18, 2001: An F-16 with the 31st Fighter Squadron from Aviano Air Base, Italy, crashes in southeastern Turkey while flying a mission for Operation Northern Watch in Iraq. The pilot ejected and was uninjured.

June 27, 2002: Capt. Robert Lopez of the Spangdahlem-based 81st Fighter Squadron is killed when his A-10 Thunderbolt crashes near Nancy, France.

March 31, 2005: Nine airmen with the RAF Mildenhall, England-based 7th Special Operations Squadron die when a MC-130H Combat Talon II aircraft crashes in Albania after the plane hits a mountain near the city of Tirana.