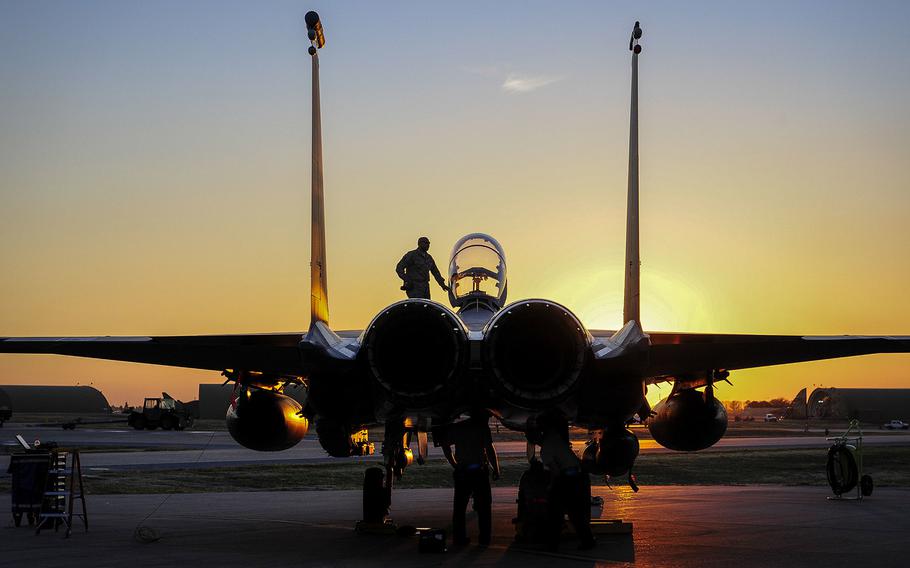 STUTTGART, Germany — Twelve U.S. Air Force F-15s sent to Incirlik Air Base in November to protect Turkish airspace and conduct strikes against Islamic State targets in Syria and Iraq are being redeployed to their home base in the United Kingdom, European Command said.

On Wednesday, the warplanes began their return to RAF Lakenheath, having completed what was designed to be a temporary deployment, EUCOM stated.

“This deployment served not only as an immediate response to a request from an ally, but as an exercise in our ability to deploy aircraft and airmen on short notice to Turkey, if needed,” said Navy Capt. Danny Hernandez, EUCOM spokesman.

Air Force A-10s and a collection of drones continue to operate out of the airbase along with a growing number of coalition aircraft from Turkey, Qatar and Germany.

Incirlik’s location just 100 miles from the Syrian border allows pilots to loiter longer over the battlefields than if they have to transit from bases located in the Persian Gulf.

The deployment of F-15Cs offered an opportunity for the U.S. and Turkey to establish operational parameters for conducting such border patrol missions. On Friday, Ankara and Washington reached a formal agreement on that framework, Hernandez said.

“Reaching that agreement is a significant step to flying the missions,” Hernandez said. “You need to have the procedures in place.”