Eye injuries par for the course at Landstuhl, life-changing for patients 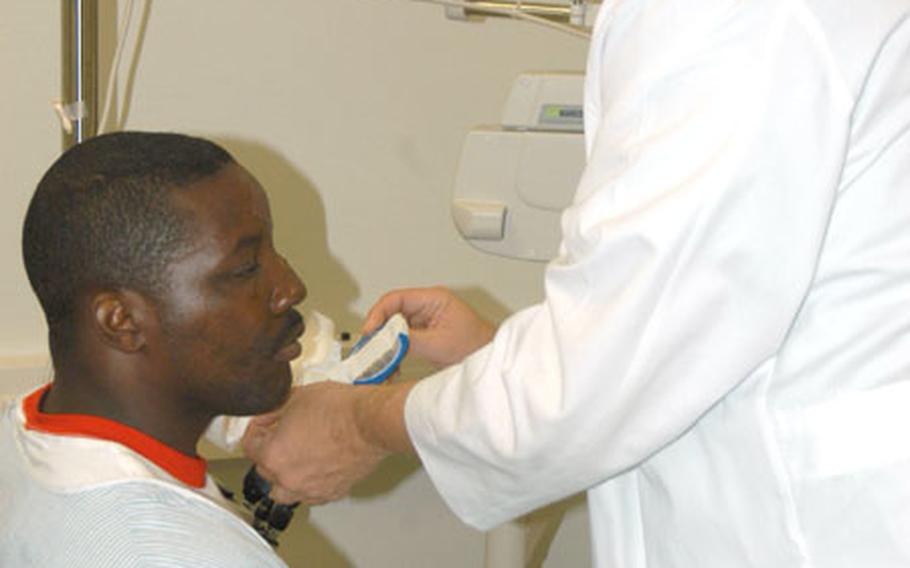 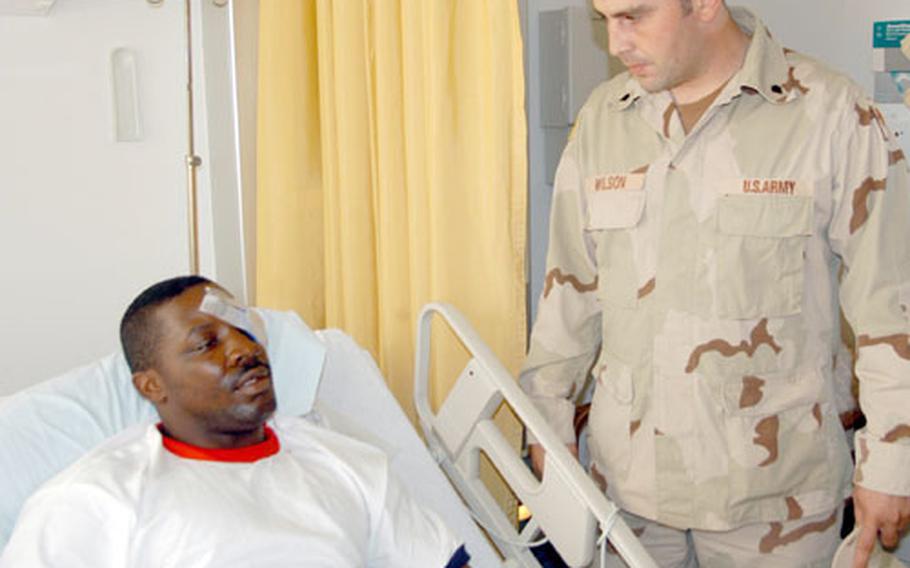 Spc. Xavier Pastchol chats with Spc. William Wilson at Landstuhl Regional Medical Center, Germany. Pastchol was in the hospital recovering from a roadside bomb attack in Iraq, and Wilson had come to Landstuhl for hernia surgery. Wilson&#39;s wife told him that Pastchol was at the hospital. The two are with Company D, 3rd Battalion, 153rd Infantry Regiment of the Arkansas National Guard. (Marni McEntee / S&S) 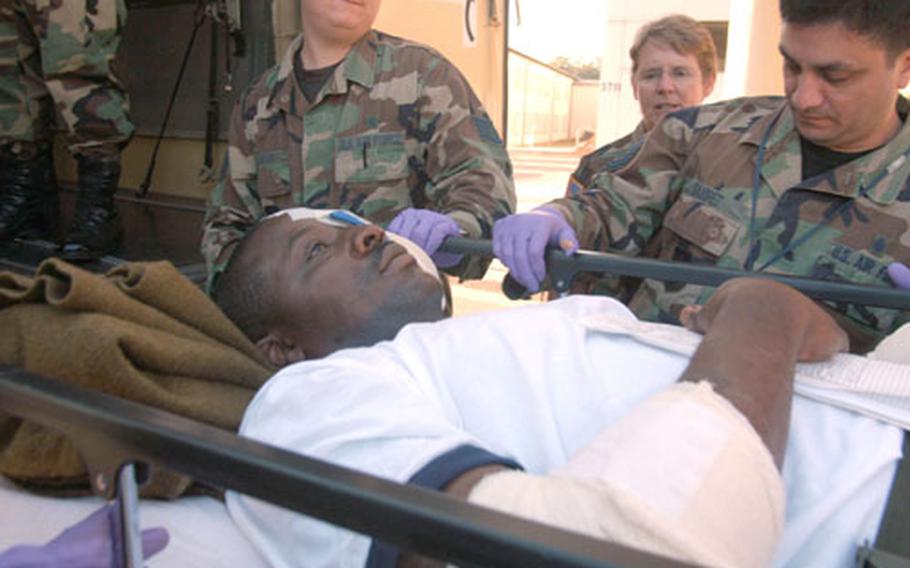 Spc. Xavier Pastchol, who was injured in a roadside bomb attack in Iraq, being wheeled from a bus into Landstuhl Regional Medical Center, Germany. (Marni McEntee / S&S)

Hess peeled the white tape, gauze and silver patch off Pastchol&#8217;s left eye. Pastchol winced when the last piece of tape came off. The eye was swollen shut.

Small drops of blood oozed from swaths of raw skin on his jaw, where pieces of a roadside bomb had hit him two days earlier in Iraq.

His left eardrum was ruptured in the blast, but he could still hear &#8212; though he had to tilt his head a bit sometimes.

A thin piece of bloody gauze hung from a hole made by a piece of shrapnel in Pastchol&#8217;s left temple.

Military doctors in Baghdad had stitched up a laceration in his eyeball, which was sliced open by shrapnel even though Pastchol was wearing sunglasses and goggles when the bomb went off.

Hess took his scope and pointed a bluish beam at Pastchol&#8217;s eye, which the soldier opened as far as he could. The slit between his eyelids was as red as a setting sun.

Pastchol, 30, arrived in Germany just after 6 a.m., after a five-hour flight. A bus took him from Ramstein Air Base to the hospital in Landstuhl.

Seven soldiers lifted his stretcher from the bus to a gurney. He smelled the sweet, clean morning air.

Pastchol was one of 32 ill and injured troops from Iraq and Afghanistan brought to the hospital on July 28. Four, including Pastchol, had battle injuries.

More than 16,995 patients from Operations Enduring Freedom and Iraqi Freedom &#8212; most from Iraq &#8212; have been treated there since 2001, hospital officials said.

&#8220;I knew he was coming since yesterday,&#8221; said Sgt. 1st Class Arturo Garcia, a liaison for the 1st Cavalry Division who was at Pastchol&#8217;s hospital room door within minutes of his arrival.

Pastchol&#8217;s 3rd Battalion, 153rd Infantry Regiment of the Arkansas National Guard, is attached to the division.

Garcia&#8217;s job was to make sure injured 1st Cav troops got everything they needed while at Landstuhl. Every day, the commanding general in Iraq got a report of each soldier&#8217;s status.

Garcia had already tracked six other 1st Cav soldiers who arrived at the hospital that day, and it was only 8:15 a.m.

By 9 a.m., Pastchol was sent to the eye clinic, where he sat more than an hour in the waiting room in his blue hospital gown and slippers. The clinic was jammed with patients in civilian clothes and in uniform. Fidgety small children and fussy babies, including twins in a double stroller, gave the clinic a playroom buzz. Doctors called patient after patient back to the examination rooms before Pastchol.

At 9 a.m. July 26, Pastchol&#8217;s convoy was heading to Camp Gunslinger, north of Baghdad, to link up with another unit.

Once his leave started in two days, Pastchol would be headed back to the arms of his wife, Tiffany, his daughters, his son Jalen, 1, and his mother, Lorine.

But before he got back to Magnolia, Ark., he had to man the gun turret of his Humvee. Spc. Brian Teague drove and Sgt. Jermellian Daniel, the truck commander, rode shotgun. Three other Humvees were in the convoy, with Pastchol&#8217;s bringing up the rear.

An Iraqi driver kept bringing his car up to the Humvee&#8217;s bumper and Pastchol was trying to wave him off. The car finally backed off and Pastchol started to relax.

Dazed, Pastchol got out of the Humvee on his own, and the other soldiers scrambled out to pull security.

It was the second time he&#8217;d been injured in Iraq. In June, a mortar attack peppered him with shrapnel. This time, Daniels kept him conscious as the convoy raced to find some medics.

While Pastchol told his story from his hospital bed the day after he arrived, Spc. William Wilson came into his room. Wilson, also of the 153rd&#8217;s Company D, was at Landstuhl for a hernia operation and heard Pastchol was there. He was Pastchol&#8217;s driver before he left for surgery.

Wilson later said no one from his unit had been killed in battle so far, but many had been injured.

The two soldiers talked about how they happened to be in the hospital at the same time.

With his right eye, Pastchol looked down at his otherwise sound body stretched out on the hospital bed.

On that first day in the hospital, Hess left the examination room for a minute. Pastchol got up and stared at the mirror, seeing his damaged left eye for the first time.

Hess came back to say that Pastchol would have to go back to the waiting room because his charts hadn&#8217;t arrived.

Pastchol went back to the waiting room. In a few minutes, he was asleep in his chair.

Back home in Magnolia, Pastchol played semi-pro football as a strong safety for the Arkansas Extras. He then served four years&#8217; active duty in the Army before going into the Guard. He was two days away from ending his commitment when his unit deployed to Iraq.

He thought back to the day barely a week before when everything in his life changed.

Now, he wondered what was in store for him back home.

Whatever happens, Pastchol says he&#8217;ll be prepared. A Baptist, Pastchol believes that God has a plan for him, and that&#8217;s why he&#8217;s still alive. After seeing his family, the first thing he plans to do is go to church.

Before he left, Pastchol saw Hess every day until he left the hospital July 31 for Fort Hood, Texas, where the 1st Cavalry Division is based.

Since May, Hess said, the eye clinic has treated more than 2,000 patients wounded downrange. Of those, 178 had punctured eyeballs. On the day Pastchol arrived, Hess seemed like he was sprinting from patient to patient.

&#8220;He is just another patient, and you have to remain objective and go through the checklist and not get upset by what you see,&#8221; Hess, 43, said of Pastchol during a brief lull in appointments the next day.

He said he wasn&#8217;t sure whether Pastchol would be able to see again in his left eye.