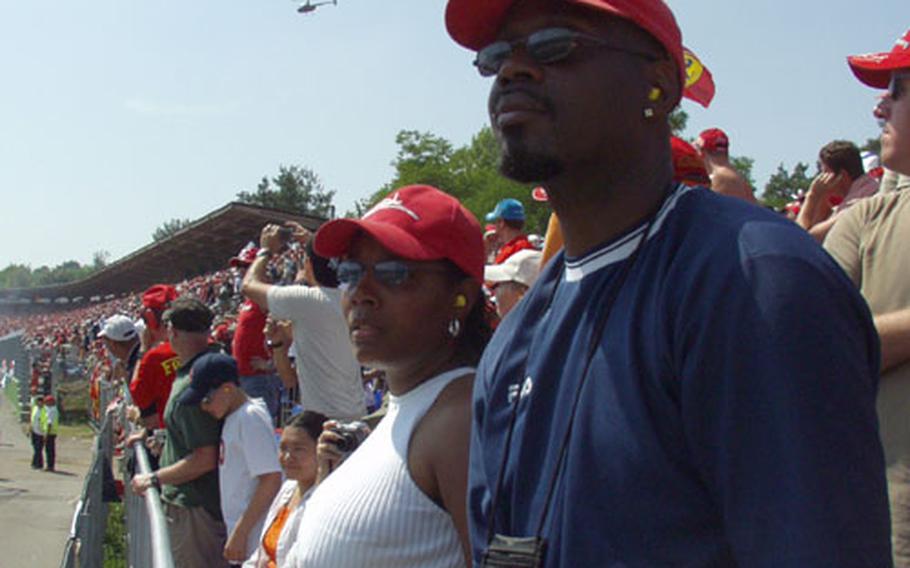 Ron and Dee Alexander, both retired military, received Extreme Summer Formula 1 tickets from friends who couldn&#39;t make the event. This was their first Grand Prix race, but both have attended NASCAR racing in Florida. (Jessica Iñigo / S&S)

Ron and Dee Alexander, both retired military, received Extreme Summer Formula 1 tickets from friends who couldn&#39;t make the event. This was their first Grand Prix race, but both have attended NASCAR racing in Florida. (Jessica Iñigo / S&S) 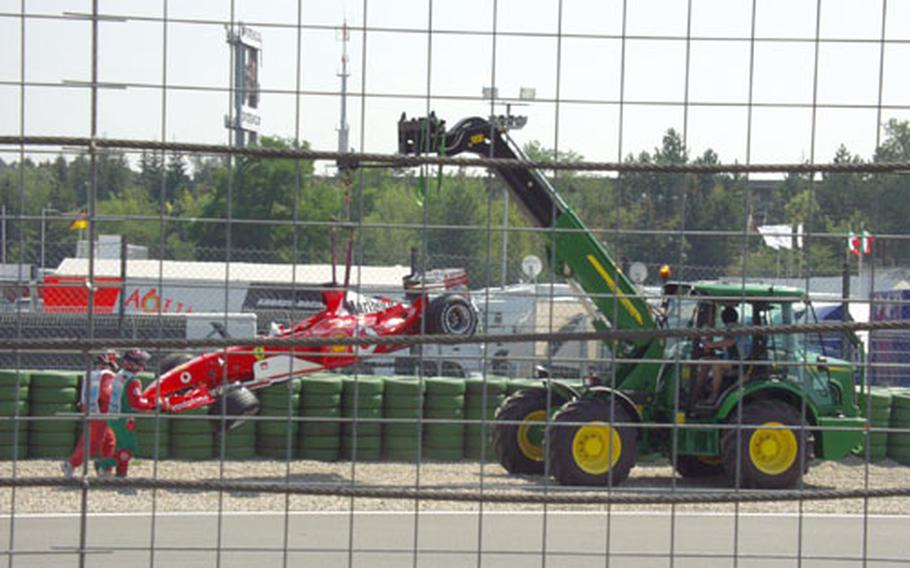 HOCKENHEIM, Germany &#8212; Five-time Formula 1 champion Michael Schumacher made it through a crash in the opening moments of Sunday&#8217;s German Grand Prix, fought his way to second place, then suffered a blown tire with just three laps left.

The sea of red in the stands in support of their hero gave out a collective groan nearly as loud as the whine from the Formula 1 cars zipping past Schumacher. But that made it all the more exciting for the American winners of the Extreme Summer Formula 1 ticket giveaway.

Nearly 26 ticket holders braved the 100-degree heat to catch a glimpse of some of the world&#8217;s top race car drivers. Though few attendees actually won the U.S. Air Force Europe Services Extreme Summer tickets ranging from 300 to 3,000 euros, they were happy to be able to go in their stead.

Ron and Dee Alexander, both retired military members, scooped up the front row seats when friends couldn&#8217;t make it because of a sick child.

The Alexanders compared Formula 1 racing to a NASCAR race they went to in Florida.

Serious damage was caused to three main contenders who were ousted during the first-lap crash. Judges determined that team Williams&#8217; driver Ralf Schumacher was responsible for the taking himself, Ferrari&#8217;s Rubens Barrichello and McLaren&#8217;s Kimi Raikkonen out of the running. Ralf Schumacher was penalized 10 places on the grid for the next race in Hungary, according to a German Grand Prix statement.

Fans were happy just to be part of his brother Michael&#8217;s sea of red even though he came in seventh.

Though hearts broke throughout Germany when Schumacher got a flat, all was not lost since he remains in first place with 71 points and only four races to go.

Juan Pablo Montoya took the flag Sunday, scurrying ahead of the initial crash and coming in nearly a minute ahead of David Coulthard of McLaren, followed by Renault&#8217;s Jarno Trulli.

The victory marked Montoya&#8217;s second win in 2003 after the Monaco Grand Prix and third in his career. He moved into second place with 65 points. Raikkonen fell to third place with 62 points.