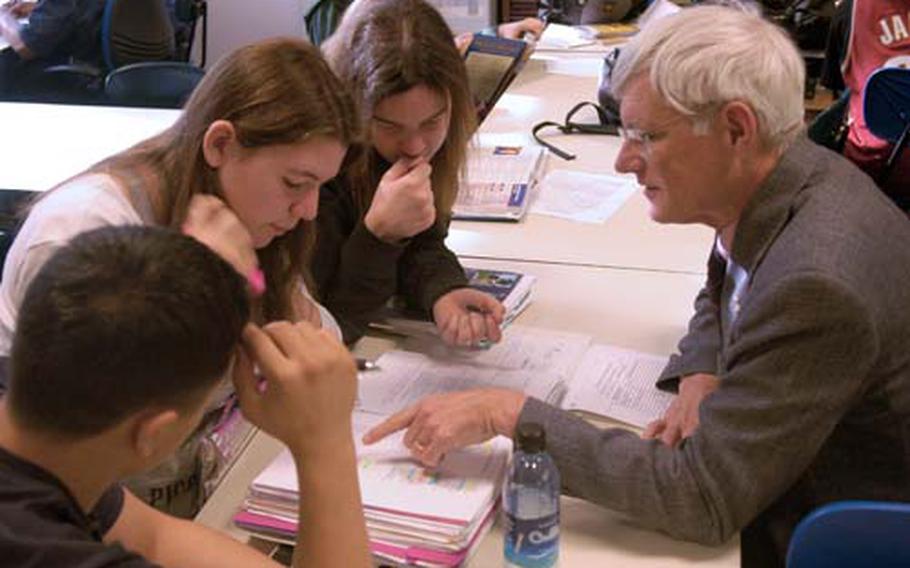 STUTTGART, Germany &#8212; As an eighth-grader, Jacob Schoonover was something of an underachiever with a 2.3 grade point average.

Now a senior, Schoonover is set to graduate from Patch High School with a 3.5 GPA and a host of honors and advanced placement credits under his belt.

The turnaround, he said, is connected to the study skills he learned in a weekly 90-minute class he&#8217;s attended the past five school years.

"It was a drastic change. I was so disorganized before," Schoonover said.

At Patch High School, 65 students are enrolled in Advancement Via Individual Determination, an elective course designed to give academic support for students who aren&#8217;t working up to their potential.

The program is offered at high schools across Europe, but Patch is currently the only school in Department of Defense Dependents Schools-Europe to be certified as a "Level Three" schoolwide program, the highest classification impacting the most students. DODDS-Europe officials say other schools are working to expand the reach of their programs.

Claire Dickmeyer, the AVID teacher at Patch, started the program at the school 10 years ago and has watched the students flourish.

"Every one of them will go on to college," Dickmeyer said of her current group.

During a typical day in the AVID classroom, students spend a portion of their time with tutors to get extra work in classes such as physics, history and math.

They also work on college preparation. Starting in freshman year, the students spend time writing letters to colleges, drafting resumes and researching financial aid and scholarship opportunities. That early focus translates into higher rates of college attendance for the AVID students, said Dickmeyer, who is in the midst of a recruiting campaign to attract more pupils to the program for next year.

Indeed, 95 percent of the students who take part in AVID go on to college, compared to a national average of 60 percent, according to program data.

To be eligible, students must have a minimum GPA of 2.0, complete an interview and sign a contract committing to a college preparation course load. The students also must agree to take honors and advanced-placement classes.

Andrew Cass, a Patch senior, boosted his GPA from 2.1 to 3.0 during the past two years because of the study skills learned in the class. The special note-taking and organization techniques require a lot of effort, but they payoff, he said.

There&#8217;s also the close scrutiny from the teacher. "If you&#8217;re not doing well, Ms. Dickmeyer will interrogate you in front of the whole class," Cass said.

"Many schools are training their entire faculties on &#8230; AVID methodologies and integrating these strategies into their School Improvement Plans," said Wendy Cooley, who oversees the AVID program for DODDS-Europe. "As a result, the students who need extra support benefit from enrollment in the AVID elective course, but all students gain from the strategies and college-going atmosphere which are implemented schoolwide."

Currently there are 1,100 students enrolled in AVID throughout DODDS-Europe.

The Patch students, however, say there&#8217;s one misconception among other students about the program that gets under their skin.

"It&#8217;s not for remedial students," said junior Victoria Harvey, setting the record straight. "You have to work really hard."