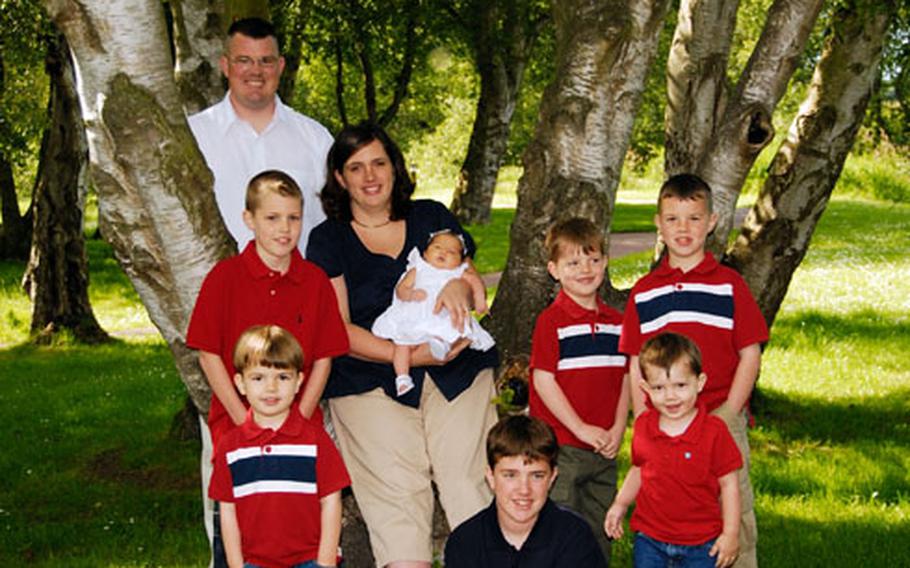 The Asbury family poses for a portrait at RAF Lakenheath recently. Anthony, 8, also at left, was recently diagnosed with leukemia and is undergoing chemotherapy at Addenbrooke’s Hospital. (Photos courtesy of PixelThis.com)

When 8-year-old Anthony Asbury was diagnosed with leukemia last month, it took only a few days for friends, relatives and colleagues of Staff Sgt. Nick Asbury and his wife, Melissa, to rally the troops in support of the family of nine.

After flying in from Louisville, Ky., Melissa Asbury&#8217;s parents, Verlyn and Anthony Fante, rushed straight from Gatwick airport to Addenbrooke&#8217;s Hospital in Cambridge. One of little Anthony&#8217;s parents or grandparents has been by his side at the hospital 24 hours a day since he began chemotherapy shortly after the diagnosis.

"We don&#8217;t want him to be at the hospital alone," said his mother, 33. The family lives near Diss, about an hour&#8217;s drive from the hospital, where Anthony will remain for the next several weeks.

When Asbury&#8217;s unit, the 48th Equipment Maintenance Squadron at RAF Lakenheath, heard the news, it raised a few thousand dollars within the shop but decided that was not enough. On Wednesday, the airmen plan to hold a barbecue fundraiser at the base&#8217;s chapel for the family, whose children range in age from 8 months to 13 years old.

"We pull together and try and help out where we can," said Senior Master Sgt. Timothy Jones, with the 48th EMS. "We&#8217;re a close-knit family overseas here. It just seemed like it happened so quick, so we wanted to act as quickly as possible."

They hope to raise $4,000 to help the family pay for travel to and from the hospital and other incidentals while Anthony undergoes treatment for the blood disease. After the intense first round of chemotherapy, Anthony is expected to be treated as an outpatient at a hospital much nearer the family&#8217;s home.

"We don&#8217;t want the family to go under any more stress than they have to," Jones said.

Meanwhile, the family is staying strong and "hanging in there," Melissa Asbury said. Friends are helping with errands and child care while her dad plans to remain with the family until little Anthony is fully recovered.