Experts: Veterans should ‘get out in the streets’ to protest government’s handling of ‘bad paper’ 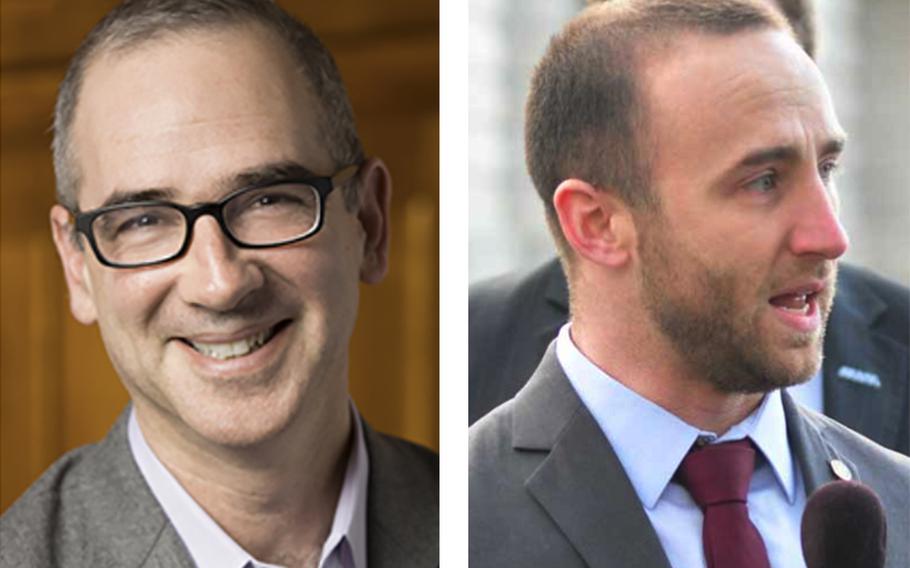 Yale Law School professor Michael Wishnie, left, said that if veterans with bad paper are going to succeed in their campaign, "it's going to take organizing and getting out in the streets." Iraq War veteran Kristofer Goldsmith, right, said the boards that decide upgrades need more resources. (Yale University, left; Stars and)

WASHINGTON – Easing challenges created for veterans who receive “bad paper” discharges will require changes in practices and procedures at the departments of Defense and Veterans Affairs, some experts said Friday.

But first, it will take public outrage.

“I think if veterans with bad paper are going to succeed in their campaign, which they must, it’s going to take organizing and getting out in the streets,” said Michael Wishnie, a professor at Yale Law School who has represented veterans in their fights for discharge upgrades.

Wishnie joined other experts Friday at the Capitol who presented findings of their studies into the military’s and VA’s handling of other-than-honorable discharges, which are commonly referred to as “bad paper.” The studies from Rand Corp., the Government Accountability Office, Brown University, Protect Our Defenders and Swords to Plowshares have a common theme: The military has unjustly kicked out thousands of servicemembers who are now ineligible for VA benefits because of it.

There are various reasons servicemembers could’ve unfairly received bad paper, the experts said. From World War II to 2011, when the military’s “don’t ask, don’t tell” policy was repealed, veterans were other-than-honorably discharged for being gay. Others struggled with service-related post-traumatic stress disorder, traumatic brain injury, military sexual trauma or other disorders that affected their behavior and led to their bad paper. Protect Our Defenders President Don Christensen, a former Air Force JAG, explained there was also a racial disparity in the military justice system.

The experts had different ideas about how to remedy the issue. Brad Carson -- a former undersecretary of defense for personnel and readiness who’s now with the research and advocacy organization Human Rights Watch – called on Congress to force the Defense Department to make their decisions more transparent.

Kristofer Goldsmith, an Iraq War veteran who’s fought for more than 10 years to change the government’s handling of bad paper and to have his own discharge upgraded, said the boards that decide upgrades need more resources. He’s been urging Congress to hold hearings and start investigations into the issue.

But Wishnie, along with others, argued that to achieve change the American public would have to call for it.

Besides veterans law, Wishnie focuses on immigration. On Thursday, he was in a court in Brooklyn, N.Y., representing immigrant “dreamers” over President Donald Trump’s possible repeal of the federal program that shields young, undocumented immigrants from deportation. Hundreds of people gathered on the courthouse steps in support of the dreamers, Wishnie said.

But there’s a different response when he goes to court to represent veterans seeking discharge upgrades.

“It’s been a long time since there’s been veterans mobilizations in the streets to match the work of veterans in the halls of Congress, in the research centers, in the courts,” Wishnie said. “And I think that veterans service organizations could learn from current civil rights movements the importance of organizing a peaceful, nonviolent protest to communicate to the public their concerns and ideas. To do this all behind closed doors misses that point.”

There is reason for optimism, Wishnie said.

In August, the Defense Department issued a sweeping policy change to afford more leeway to veterans seeking upgrades to their other-than-honorable discharges.

The Army Review Boards Agency — the office charged with changing military records — was instructed to give liberal consideration to veterans looking to upgrade their less-than-honorable discharges because of mental health conditions or traumatic brain injury, sexual assault or sexual harassment and outlines what should be considered when deciding an upgrade.

The change came after the Government Accountability Office released a report in May stating more than 57,000 servicemembers suffering from PTSD, TBI or adjustment, anxiety, bipolar and substance abuse disorders were separated from the military for misconduct from 2011 through 2015. Researchers found the Defense Department didn’t consistently apply its policy to take into consideration that a service-related medical disorder could lead to misconduct.

“We have reason to hope things will improve, but the matters are so urgent – they are truly life and death,” Wishnie said. “We can’t sit back and trust that with eventual change will come the improvements we strive for.”