Experts: US lag in tech, national security race against China could worsen under Trump 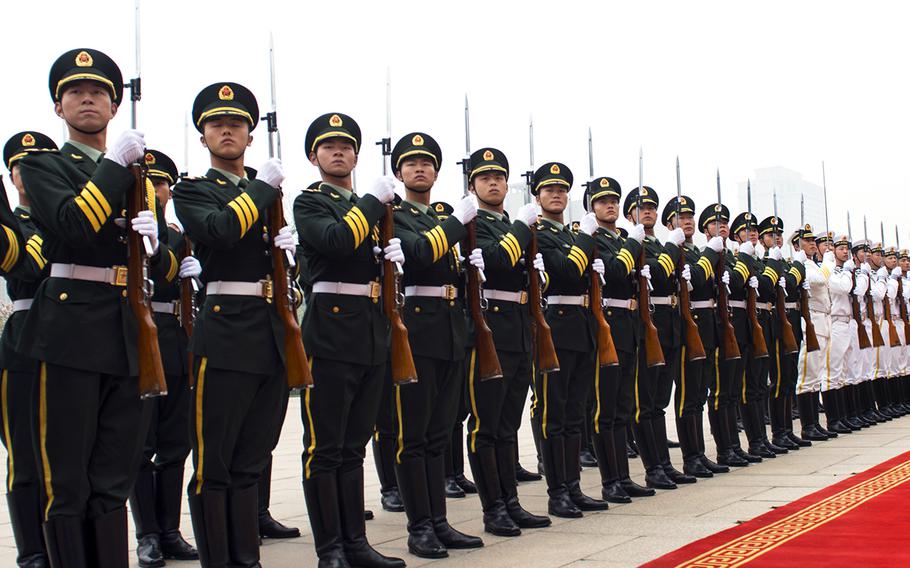 Members of a Chinese honor guard welcome dignitaries during a ceremony in Beijing on April 20, 2013. During a House hearing on Capitol Hill in Washington on Tuesday, Jan. 9, 2018, witnesses expressed concerns that the United States may be lagging behind China in developing new technologies. (D. Myles Cullen/Defense Department)

WASHINGTON — In a sobering reminder of a U.S. lag in the tech-based national security race against China, a panel of experts told a House committee that the country faces an uphill battle to gain dominance in the field.

Among the newest challenges, President Trump’s anti-immigrant rhetoric and a lack of focus from the White House on the technology initiatives, including artificial intelligence, are fueling worries the United States could now fall further behind, several lawmakers and experts said.

This, as the Pentagon remains largely occupied with fighting America’s longest wars in Iraq and Afghanistan with “steel, iron and people” at the potential detriment of developing future weapons, one expert told a House Armed Services Committee subpanel Tuesday afternoon.

“Despite significant efforts by Congress and the Department (of Defense), other nation-state actors have made advances in emerging technological areas that endanger, and in some cases obviate, U.S. technological superiority,” said Rep. Jim Langevin of Rhode Island, the ranking Democrat of the subpanel. Battlefield application of China’s technological advancements, such as hypersonic speed, artificial intelligence and cyber tools, “are absolute game-changers in areas where I believe the United States must maintain superiority.”

The conversation marked a stark reminder of the wide list of threats facing the United States from around the world aside from the 17-year war on terrorism as well as increasing worries of a nuclear engagement with North Korea.

The House Armed Services subcommittee on emerging threats and capabilities, which hosted Tuesday’s hearing on China’s pursuit of emerging and exponential technologies, has reviewed the country’s advances in cyber capabilities, information warfare and weapons systems such as hypersonics and so-called directed energy weapons that can involve laser-based systems.

“China continues to increase their research and development investments at an alarming pace, and is rapidly closing many of their technology gaps,” said Rep. Elise Stefanik, R-N.Y., chairwoman of the House subcommittee.

The White House’s lack of attention on the China threat, and Trump’s rhetoric on immigration, could be compounding efforts to keep China from gaining dominance, experts said. The rhetoric alone could drive innovations outside the United States, said Paul Scharre, director and senior fellow for the technology and national security program for the Washington think tank Center for a New American Security.

“I think it’s too early to tell whether we will see significant damage from the current administration’s policies” on immigration issues, Scharre said. “But the cultural perception is certainly damaging. People will say ‘look there’s too much uncertainty … I am going to go elsewhere.’”

This, as the White House has yet to appoint a director to its Office of Science and Technology Policy, or OSTP. And the office’s division for national security appears to have no personnel, said Rep. Jackie Speier, D-Calif.

“I am concerned,” Speier said. “The White House has not conveyed an alarm that this function is critical.”

Dean Cheng, senior research fellow with the Asia Studies Center at the conservative think tank Heritage Foundation, was critical of past efforts by the office to work collaboratively with China and said perhaps an empty seat is preferable. But other experts disagreed.

“The lack of leadership in the White House on this issue is a concern,” said Scharre.

William Carter, deputy director and fellow with the technology policy program at the Washington think tank Center for Strategic and International Studies, agreed.

“A lot of what was done in the [President Barack] Obama administration was …to task people with gathering information to finding answers to some of these tough policy challenges,” Carter said. “I worry that at the working level … they are going have no one to report to when they find answers. Those were important questions we are going to have to answer, not just for national security purposes.”

However, an organization shift at the Pentagon could refocus efforts on addressing the tech-based race with China, Stefanik said. This year, the Department of Defense is slated to re-establish its post for undersecretary of defense and research and engineering.

It “needs to be the prime mover to drive change and foster innovation within the department,” Stefanik said. “The threats we face from China and others demand that we energize and organize our government to ensure that policy keeps pace with technology in order to define a national science and technology strategy, and to close the gap with China.”

The Pentagon, for example, still faces a challenge thinking beyond the traditional defense industrial base.

“Their key metric is still metrics in steel, iron and people,” Scharre said. “If you talk to the Navy, they are going to talk about ships, the number of aircraft carriers. If you talk to the Air Force, they talk about the number of tactical fighter aircraft and bombers. The Army cares about the number of Army brigade combat teams. And those are the key metrics of national power. In World War II, that was a war won by steel and iron, right? The Allies outproduced the Axis powers. That’s not the era we are in today. Those are not necessarily the right metrics.”

China is increasingly relying on their own companies to advance their technological efforts, which could translate into economic gains and reduce their foreign dependency, Stefanik said.

Among China’s national-level plans, the country is aiming to achieve dominance in artificial intelligence by 2030 and has a top-down, government-driven agenda to collaborate between industry, academia and civil society, she said.

“There are also obvious national security implications should they corner the market on advanced technologies critical to national security,” Stefanik said. But China’s technological dominance “is not a forgone conclusion. What we learn today and in future hearings must be translated into action – to inform and reform the Department of Defense in support of national level efforts, so that the United States remains home to the world’s leading experts, researchers, and technological breakthroughs.”