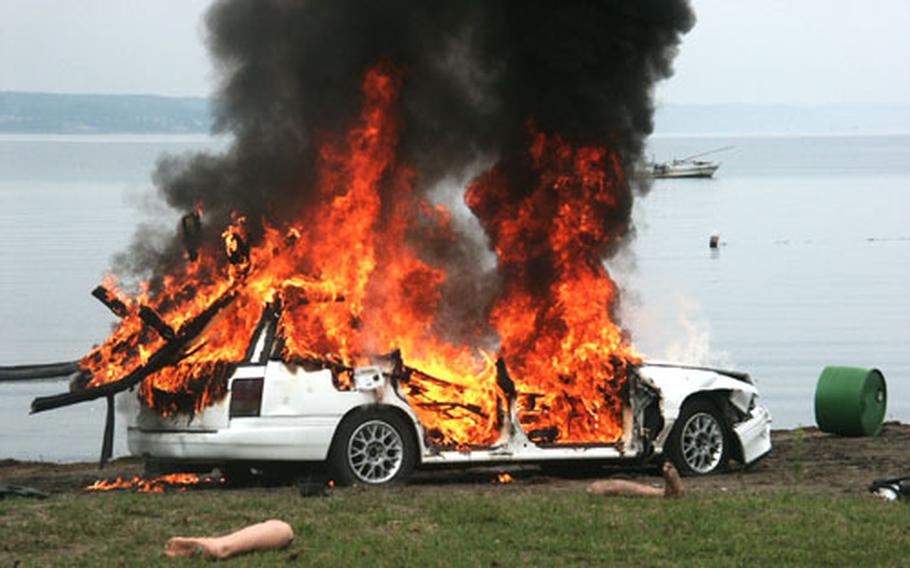 A parked car burns at a beach Friday as part of a weapons of mass destruction exercise at Misawa Air Base, Japan. The exercise tested the 35th Fighter Wing&#39;s ability to respond to WMD incidents as part of the Air Force Weapons of Mass Destruction Installation Training and Exercise Program. (Courtesy of the U.S. Air Force)

A parked car burns at a beach Friday as part of a weapons of mass destruction exercise at Misawa Air Base, Japan. The exercise tested the 35th Fighter Wing&#39;s ability to respond to WMD incidents as part of the Air Force Weapons of Mass Destruction Installation Training and Exercise Program. (Courtesy of the U.S. Air Force) 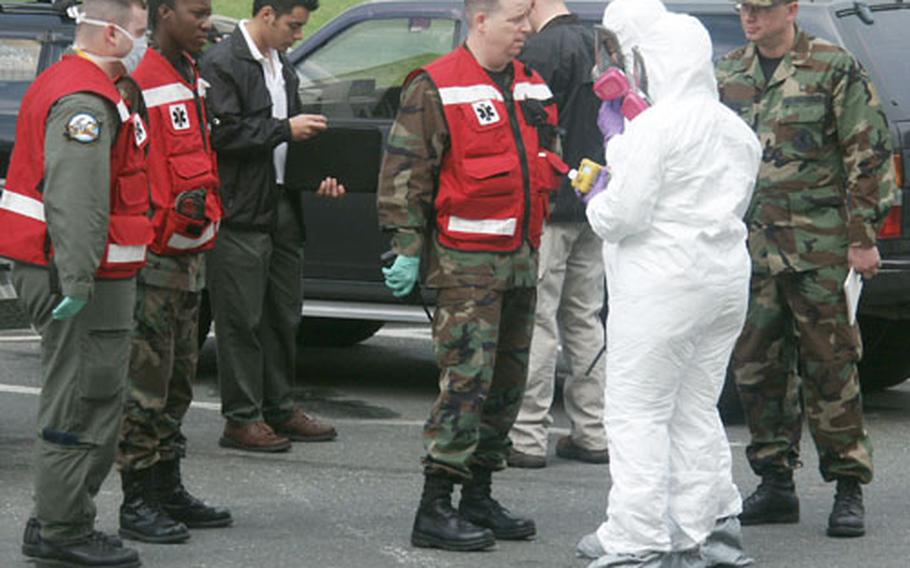 Medics discuss their next action after responding to the site of a simulated exposure to smallpox Friday as part of a Misawa Air Base, Japan, weapons of mass destruction exercise. (Courtesy of the U.S. Air Force)

In the post-Sept. 11, 2001, world, where a terrorist&#8217;s weapon of choice could be a biological or chemical agent, the military is adopting a civilian model of incident-management response.

Training culminated in a 35th Fighter Wing exercise Friday involving simulated exposure to smallpox and terrorists blowing up a car carrying industrial pesticide near a physical training class on the base beach.

The teams are conducting the program at select Air Force bases around the world and recently finished training on Kadena Air Base, Okinawa.

The Air Force WMD program started about two years ago, was prompted in large part by the Sept. 11 terror attacks, said Maj. Kurt Lee, the only active-duty member and team leader for AFCESA.

&#8220;After Sept. 11, several of the Air Staff organizations who directed this program felt there was a need to support the installations in completing their mission in conducting WMD/terrorist attack exercises and training for that,&#8221; Lee said.

The intent is to synchronize the way civilians and military personnel would respond to such incidents since each can and likely would assist the other in the event of a chemical or biological attack, Lee said. The military has resources that could help local communities; and if a military installation were hit, surrounding jurisdictions likely would be impacted, as well.

The Defense Department &#8220;has always had its own method of responding to incidents because they have a unique mission,&#8221; Lee said. &#8220;Really, before, there wasn&#8217;t as much interaction expected between the military and civilian responders. Now the president is mandating that we work together because the military has so many resources available.&#8221;

Rather than one incident commander on scene, for example, the military will go to a unified command or group of decision-makers, like many civilian communities do already.

One of the intents of the program, Lee added, is to get bases to start thinking about how they would interact with the local community, either in training for or responding to a terrorist attack. However, overseas there are challenges with &#8220;language, jurisdiction, customs, possibly willingness of the community to really recognize that this is a real threat,&#8221; he said.

Another challenge is the distance from the United States and domestic support agencies, such as the FBI.

Overseas bases need to plan for that, Lee said, figuring &#8220;it may be two days before we can get anybody to do this, how are we going to handle that in the interim? That should be part of the wing plan.&#8221;

Much of the wing at Misawa knew there was to be an exercise Friday but didn&#8217;t know the details.

Friday morning, a &#8220;fake supervisor&#8221; called up one of the dormitory managers to report that an airman did not show up for work, said Misawa spokesman Capt. John Haynes. According to that exercise scenario, emergency responders were to find the airman dead from smallpox exposure.

Senior Airman Kimberly Mahan, part of Explosive Ordnance Disposal training operations, 35th Civil Engineer Squadron, spent most of the exercise at the base beach, where EOD was sent to investigate a suspicious car that turned out to be laden with an industrial pesticide.

&#8220;I think across the board this is fairly new to most installations, and so they&#8217;re going through a lot of growing pains. These are very difficult, complicated scenarios; not something that most of the folks are familiar with on how to handle,&#8221; he said. &#8220;Through this program, they get better prepared.&#8221;