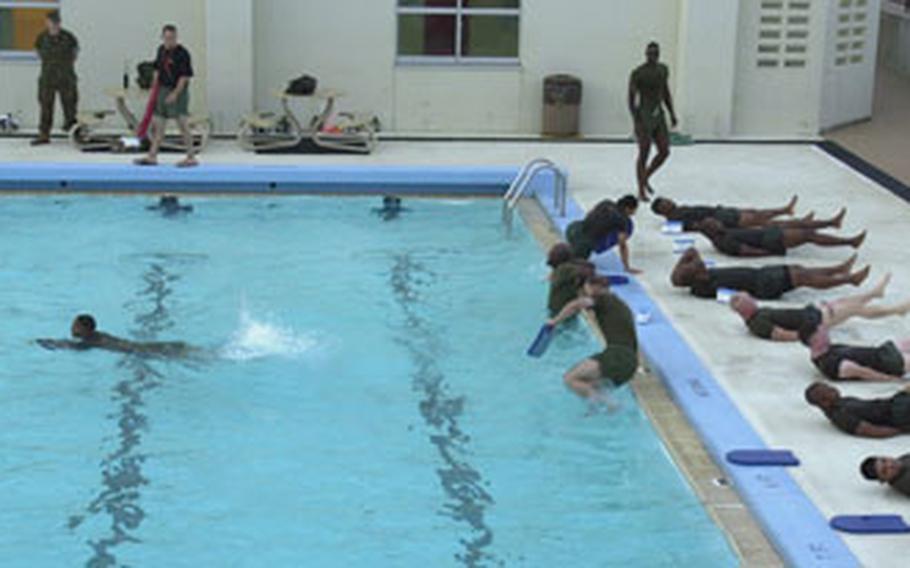 "Water aerobics" is one of the physical training sessions taught to those attending the Sergeants&#39; Course at the Staff Noncommissioned Officers Academy on Camp Hansen. (Cindy Fisher / S&S)

"Water aerobics" is one of the physical training sessions taught to those attending the Sergeants&#39; Course at the Staff Noncommissioned Officers Academy on Camp Hansen. (Cindy Fisher / S&S) 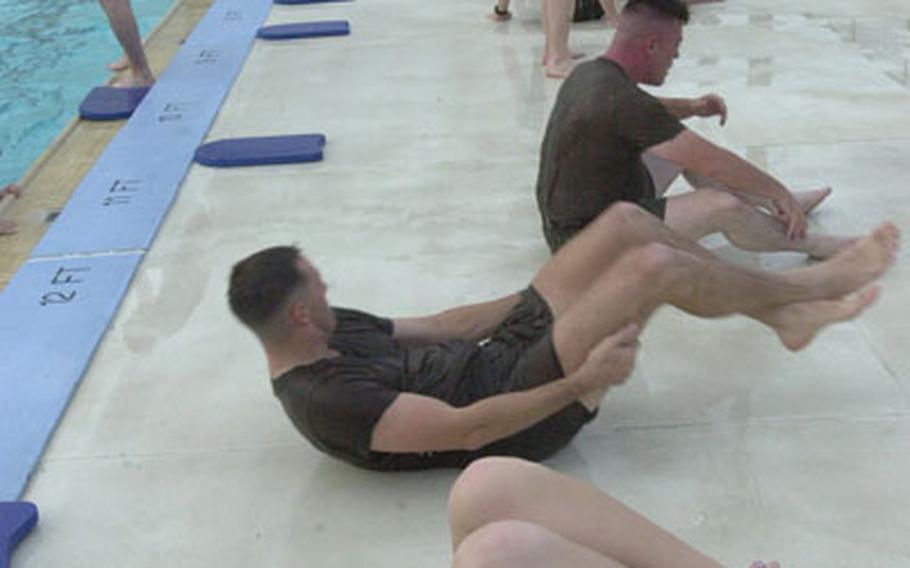 In the academy&#39;s version of water aerobics, Marines pair up and while one swims a lap across the pool, the other performs a calisthenic exercise. After each lap, partners switch. (Cindy Fisher / S&S)

Maybe some sit-ups and push-ups and a few pull-ups.

That&#8217;s what many servicemembers think PT is all about: pounding the pavement.

It&#8217;s a way of thinking some military leaders are trying to change. And it&#8217;s a change they believe will make troops stronger and more battle ready.

The Erwin Professional Military Education Center on Kadena Air Base, Okinawa, has gone &#8220;away from the traditional running on the road and incorporated different styles&#8221; of physical fitness, said Senior Master Sgt. Chris Howard, director of education at the military leadership institution.

At least one of the center&#8217;s three weekly PT sessions includes running, he said, but students also do spin aerobics, calisthenics and other total-body workouts.

&#8220;If you work on balance, stamina and endurance, you can last much longer&#8221; in physically demanding situations such as combat, he said.

That is the point of PT, after all &#8212; ensuring servicemembers are physically able to endure the rigors of combat, said Gunnery Sgt. Curtis Rice, chief instructor at the Sergeants&#8217; Course at the Staff Noncommissioned Officer Academy at Camp Hansen, Okinawa.

He and other instructors have incorporated swimming, calisthenics and aerobics into PT sessions.

Marines get motivated when they know they won&#8217;t just be running all the time, and motivated Marines &#8220;push themselves to their physical limits at every PT session,&#8221; Rice said.

Jason Vandenberg, an athletic director at Misawa Air Base, agrees with the importance of a diverse fitness program.

&#8220;A successful program combines group and self-directed elements and a variety of aerobic, as well as recreational, activities that promote progression of individual fitness levels &#8230; operational readiness and unit esprit de corps,&#8221; he said.

But Rice said Marine students often tell him that their units run for every PT session.

Airman 1st Class Christopher Leon, with 374th Logistics Readiness Squadron at Yokota Air Base, Japan, said his unit does a lot of running, too.

Run sessions can be valuable &#8212; but again, variety is key, experts said.

The Army&#8217;s FM 21-20 Physical Fitness Training manual &#8212; which espouses a variety of workouts for soldiers, from aerobics and swimming to bicycling and cross-country skiing &#8212; provides ideas for run sessions that aren&#8217;t so run-of-the-mill. Among the ideas are having soldiers run together based on their fitness level and last-man-up running, where soldiers run in single file and continually have the last man in the pack sprint to the front.

Spc. David Ghim, with Headquarters and Headquarters Company, 8th U.S. Army, in South Korea said his unit uses some of those techniques.

At the Okinawa-based military leadership academies, both Howard and Rice work variety into their running programs.

Howard has incorporated sprint training at the track and also uses circuit training, in which students run laps between exercises.

He advised breaking up regular runs by sprinting up hills, running short stretches backward or doing lunges for short distances.

&#8220;The different movements develop different leg muscles and give a better workout,&#8221; he said.

The instructors contend their methods are working.

He said the student came back a year later with a 36-inch waist.

Rice, too, has noted an increase in his students&#8217; fitness over his seven-week course.

The average initial physical fitness test score for a class of 60 is about 230 out of a maximum of 300 points, Rice said. By the end of a course, the final PFT average increases to 250.

Howard and Rice hope the ideas they teach will spread throughout their services.

Rice knows his ideas are contagious, he said.