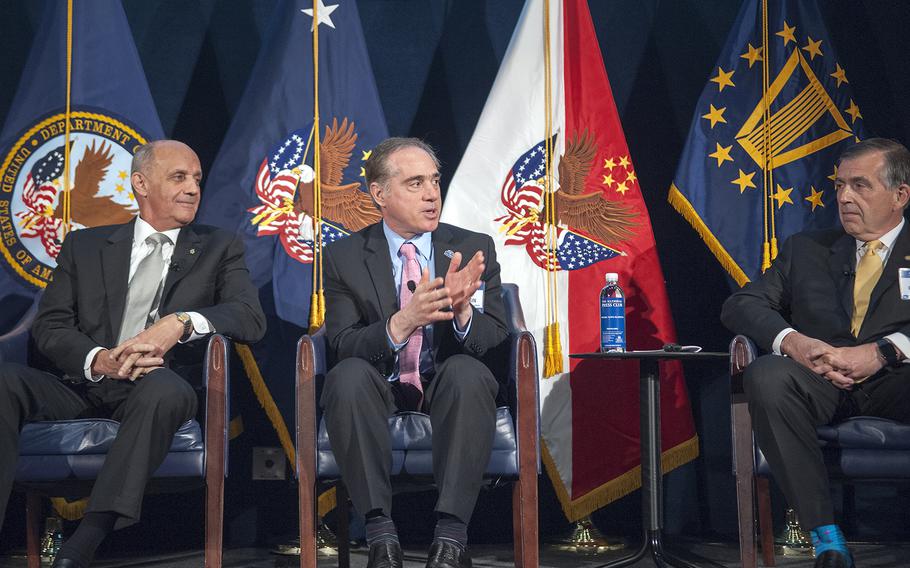 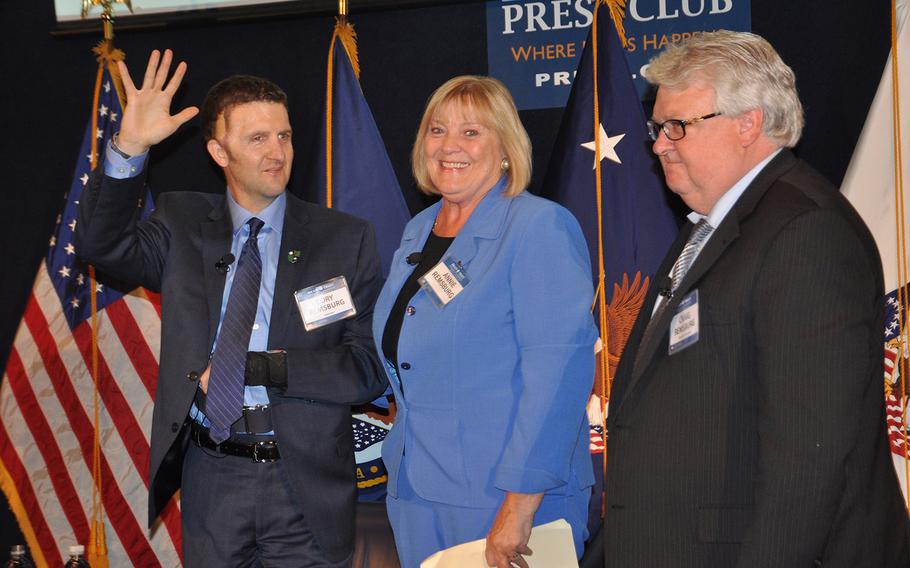 Buy Photo
Army Sgt. First class Cory Remsburg, left, along with his parents Annie and Craig, receive a standing ovation during a VA Brain Trust summit in Washington DC. Remsburg was an Army Ranger when he suffered severe injuries, including traumatic brain injury from a bomb in Afghanistan in 2009. (Dianna Cahn/Stars and Stripes) 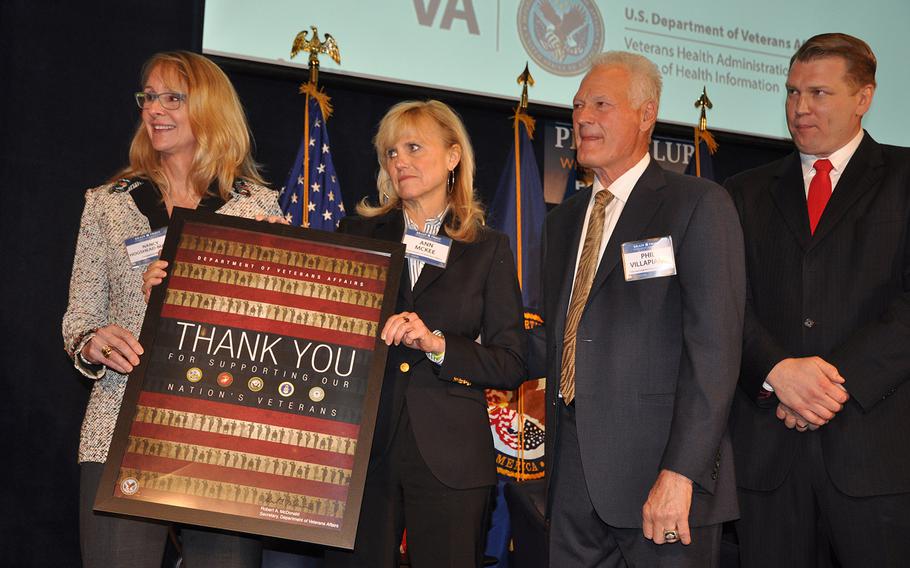 WASHINGTON — A Super Bowl champion, an Olympic gold medalist and Department of Veterans Affairs Secretary Bob McDonald announced they are leaving their brains to scientists seeking a cure to traumatic brain injury.

But the three couldn’t compete with Sgt. First Class Cory Remsburg at this week’s Brain Trust summit. The Army Ranger and his parents brought hundreds of participants at the summit to a standing ovation with his story of recovery from a deadly bomb blast in Afghanistan.

The bomb blew out an ear and an eye, collapsed both his lungs and threw him 40 feet through the air to land face down in water. He wasn’t breathing, his skull was pummeled, he had broken bones and his chances of survival were small. But Remsburg did survive, due to a direct pipeline of care led from the battlefield through six years of recovery, his parents and doctor said. He emerged from a coma mute and completely immobile and, though he’s still severely disabled, today he is walking and can speak.

Remsburg’s recovery is a prime example of “the brain being able to fix itself,” said former U.S. Surgeon General Richard Carmona. Scientists now know that even 90 or 100 year olds will grow new neural networks as they learn to play an instrument or speak a new language.

“Really, Cory’s story speaks of that,” Carmona said. “Because from being almost functionless from these devastating injuries serving our country, look at what’s happened.” If you have the right environment, “the brain can continue to remodel itself.”

But science has only scratched the surface of how the brain suffers injury and how it heals, said Carmona and others on an expert panel that led off the two-day event. TBI and post-traumatic stress disorder account for the highest percentage of injured servicemembers from the wars in Iraq and Afghanistan and scientists are struggling to understand the effects of multiple concussions and when it leads to cognitive brain disease, such as chronic traumatic encephalopathy.

If they are to find the answers, the research community must share information to find a cure – something it isn’t doing now, said Gen. Peter Chiarelli, a retired Army Vice Chief of Staff.

“If we are going to make progress in traumatic brain injury and post-traumatic stress research, we really have got to start collaborating and working together in ways that most researchers cannot imagine,” said Chiarelli, who runs the nonprofit ONE MIND, which advocates for people with brain disease and for a faster track to finding a cure.

The system is now geared toward individual success. The Nobel Prize is more often than not awarded to individual scientists, and academic institutions measure their scientists’ success by the findings they publish. Data is proprietary, disease research is segregated into silos, and the opportunities that would arise from bringing scientists together to brainstorm problems is lost, he said.

“TBI in all its different forms is associated with other neurodegenerative diseases, like Alzheimer’s, Parkinson’s, dementia,” Chiarelli said. “We just don’t know whether people that are studying any one of those diseases, if their data sets were opened up for other researchers studying associated diseases, whether or not they could find a key, the critical piece that would allow us to move quicker to real diagnostics and treatments.”

Chiarelli recalled when the AIDS epidemic first emerged, a group of mothers marched Washington and lobbied Congress until lawmakers convened a public-private partnership to look into the disease. That group, he said, made remarkable advances in a short time and today, the industry is talking about a cure.

“Medical research is the only place I know that you would have success like you had with AIDS and then go back to doing everything the same way you did it before,” he said.

As serious as AIDS is, the injuries suffered by Cory and others are just as debilitating, Chiarelli said.

“We need to find answers,” he said. “And we can do that if we work together.”

The impact of concussions has emerged not just on the battlefield but in far greater numbers in sports such as boxing and football, Chiarelli said. Some 2.5 million Americans show up in emergency rooms each year with head trauma, he said, compared with 360,000 servicemember concussions since 9/11.

Meanwhile, findings indicate a large proportion of soldiers were involved in contact sports as kids and many of them had suffered multiple concussion before entering the military. The real opportunities lie in studying that entire population of concussion sufferers.

That collaboration was on display at the start of the conference Tuesday when former Olympic swimmer Nancy Hogshead-Makar and former Oakland Raiders linebacker Phil Villapiano announced they would donate their brains to the Concussion Legacy Foundation’s campaign to collect brains for science. The foundation, in partnership with Boston University and the VA, helped form the Center for the Study of Traumatic Encephalopathy and the VA Brain Bank.

To date, the only way scientists know how to study CTE is with cadaver brains. Of the 325 brains that the brain bank has collected, it has diagnosed 200 with CTE and now claims to be the largest repository of CTE tissue in the world.

Hogshead-Makar said the scourge of TBI had discouraged youngsters from joining youth sports, depriving them of vital long-term health benefits.

Villapiano said he never knew that all the fun he was having on the football field – ramming the other guy with his helmet and tackling as hard as he could – would do long-term damage.

McDonald said he had listened to the powerful veterans stories and the challenges the top researchers face and he made a decision.

“I decided to join the hundreds of veterans and athletes who have already donated their brain to the VA Brain Bank so that I may, in a small way, contribute to the vital research happening to better understand brain trauma,” he said. “This is a very, very serious issue, one that affects veterans and non-veterans alike.”

Medical researchers don’t know as much as they should about brain health, McDonald said. The VA must continue leading a coalition of scientists to find those answers.