Experts say more needs to be done for brain-injured 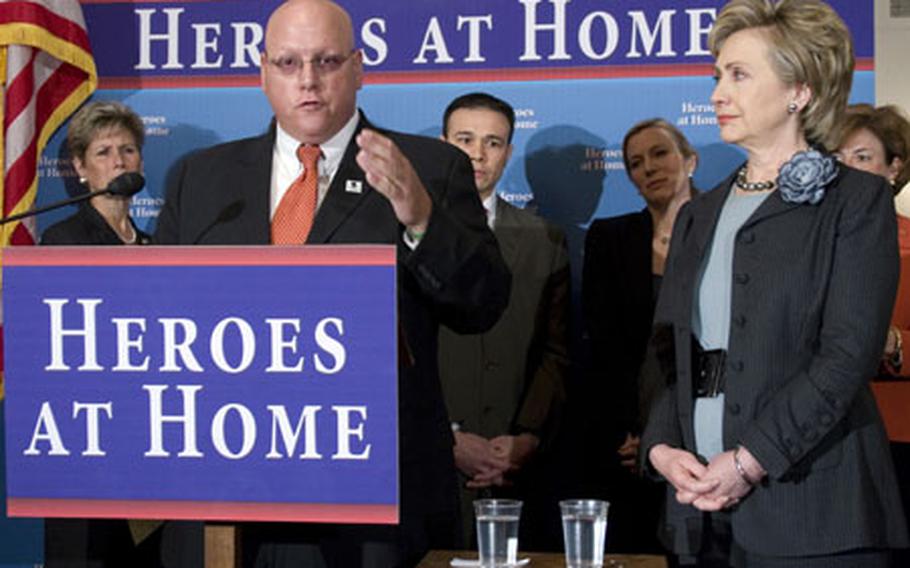 WASHINGTON &#8212; Retired Army Sgt. Edward Wade has adjusted to his prosthetic right arm, his nagging foot pain and most of the other ailments caused by a roadside bomb in Iraq three years ago.

What he hasn&#8217;t been able to get used to is the lingering fogginess in his mind from the brain injury he sustained in that blast.

Wade and his family joined medical experts on Capitol Hill on Thursday to lobby for more brain injury research, both before troops deploy and after they return home, and for a bill introduced by presidential candidate Sen. Hillary Clinton, D-N.Y., mandating more attention on the issue.

That legislation would require more access to mental rehabilitation for wounded troops through the departments of Defense and Veterans Affairs, better training for family members to care for injured loved ones, and more comprehensive monitoring of all troops for signs of brain trauma.

Health officials said the military has done a good job identifying severe brain trauma cases for troops such as Wade, who was in a coma and near death after his February 2004 injury.

But they added that mild cases of head trauma &#8212; concussive explosions that don&#8217;t leave visible signs of injury, for example &#8212; are not being identified or treated, even though those injuries can lead to long-term problems.

&#8220;We&#8217;ve seen a rise in [troops] who are having seizures, people who are having trouble controlling their thoughts and memories and emotions,&#8221; said Dr. Katherine Henry, director of neurology for the New York University School of Medicine.

&#8220;For many of these even with mild brain injuries, they may never return to full brain functions.&#8221;

Landstuhl Regional Medical Center in Germany launched a brain injury screening program last May, identifying a third of its war-related patients as suffering from some level of mental impairment.

John Melia, executive director of the Wounded Warrior Project, said screening programs are needed for every deployed servicemember, as well as some baseline evaluation of those troops before they leave for comparison.

&#8220;We really need the government to step up,&#8221; he said. &#8220;If this country cannot serve severely injured men and women coming back from this conflict, we need to look at ourselves. Unfortunately, to this point we have failed.&#8221;

Wade has received some rehabilitation for his brain injuries, but his wife, Sarah, said they&#8217;ve had to fight for every evaluation and treatment session. Army officials pressured him to medically retire, she said, and VA officials aren&#8217;t equipped to provide consistent and quick care for the new head trauma cases coming out of the war zone.