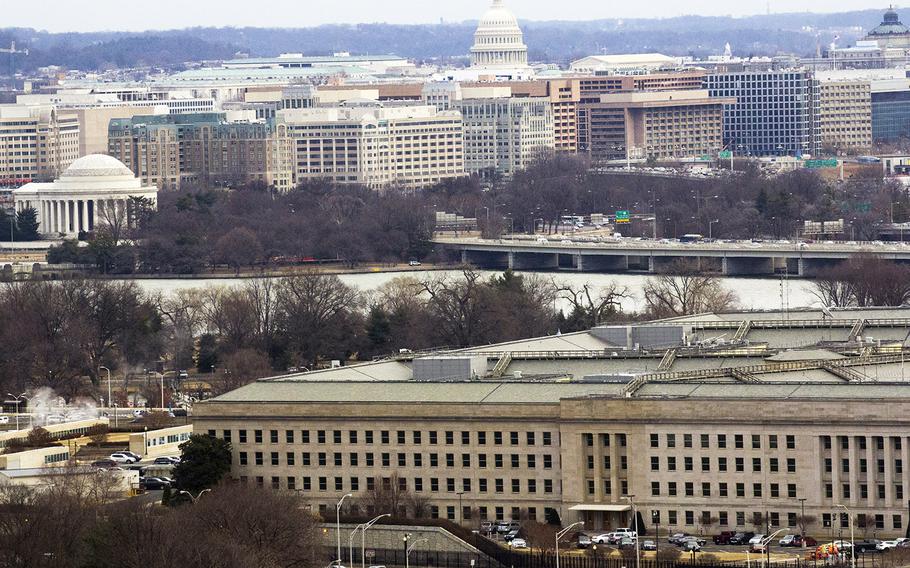 Buy Photo
The Pentagon, with the Jefferson Memorial and U.S. Capiitol in the background, Jan. 30, 2018. (Joe Gromelski/Stars and Stripes)

WASHINGTON — Despite questions over a ballooning U.S. deficit and other funding dramas, the 2019 military budget proposal out Monday is poised to win support on Capitol Hill, experts say.

The Pentagon released a plan seeking a 10 percent increase in funding, asking Congress for $686.1 billion next year to grow the size and might of the military, primarily in response to China and Russia’s growing capabilities.

Experts say that with a deal in place to bust statutory spending limits and Congress invested in military improvements in an election year, the budget plans are poised to win Hill support.

“The amount of the budget, I don’t expect a problem there. Everyone signed off there,” said Mark Cancian, a senior adviser at the Center for Strategic and International Studies, a Washington think tank. “It should be an easier year this year, assuming nothing blows up.”

“Given that the DOD request was locked and loaded before Friday’s budget deal was confirmed, this budget will have less impact than other years,” said Lauren Fish, a defense strategies research associate for the Center for a New American Security, a Washington think tank. “They just didn’t know the state of the political operating environment on the Hill when drafting the request. However, the top lines match up. The president requested $716 billion for national defense, which is what Congress is prepared to give him.”

The budget represents a $74 billion increase over the Defense Department’s current funding. It calls for $617.1 billion in base funding and $69 billion for the Overseas Contingency Operations war fund. The request does not include national defense money for other agencies that contribute to the overall $716 billion request.

“I want to thank you and the president for negotiating a budget agreement that gives long overdue relief to the military,” Sen. Lindsay Graham, R-S.C., told Office of Management and Budget Director Mick Mulvaney during a Senate budget hearing Tuesday.

By 2028, the deficit is on track to nearly eclipse the U.S. Gross Domestic Product, a benchmark of a country’s economic health.

But the Pentagon seemed immune to much of the concern, except from fiscal hawks worried that the military increases would add to the deficit.

“I know that our military leaders would tell us that our deficits are the greatest threat to our nation,” Sen. Bob Corker, R-Tenn., and member of the Senate Budget Committee, during Tuesday’s hearing. “Not Russia, not ISIS, not the many things we are dealing with in the Middle East and around the world, but our debt.”

The first priority of the 2019 budget was to address national security, Mulvaney said.

“It’s a lot more fun to spend money than it is to reduce,” he admitted. “It’s incumbent upon all of us to start making difficult decisions to decide together as a legislature and as an administration: Are these deficits that we are willing to tolerate?”

In the meantime, it’s key to rein in wasteful spending, which could be helped by the first-time Defense Department audit, which could start marking new savings by September, Mulvaney said.

Cancian said one of the weaknesses of the new military budget proposal was the absence of management reform or base closures through the Base Realignment and Closure, or BRAC, process.

“You can get savings but you have to invest some political capital,” he said. “Making cuts is hard.”

Challenges remain Even after lawmakers reached a deal Friday to lift mandatory defense spending caps, they have yet to pass a full Pentagon budget for 2018 and 2019.

Lawmakers will need to issue an appropriations plans by a March 23 deadline.

“The biggest challenge will be keeping in step with the plan as other distractions arise,” Fish said. “Hopefully the needed modernization and improved readiness this budget promises will keep the joint force prepared for any contingencies, but a flare-up around the globe would divert attention and resources.”

Cancian suggests it’s possible lawmakers will finally sign off on a 2018 budget by March. By then, lawmakers might have a 2019 budget resolution that previews military spending.