Experts: Japanese had little choice but to accept change 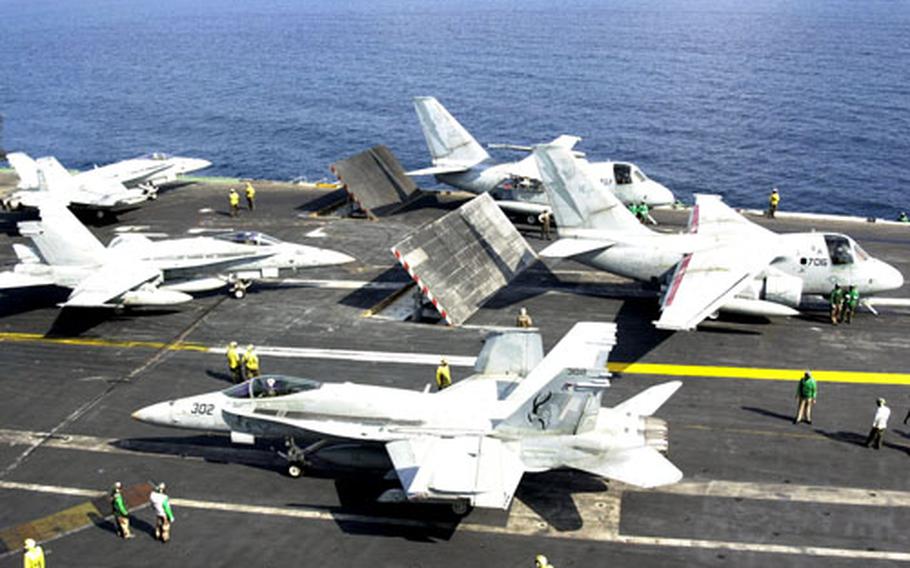 TOKYO &#8212; U.S.-Japan security experts say the Japanese government had little choice but to agree with the U.S. decision to replace USS Kitty Hawk at Yokosuka Naval Base with a nuclear-powered carrier.

The aging ship is to be decommissioned in 2008, and the U.S. is not building any new conventionally powered carriers.

&#8220;There is no option if the U.S. Navy is phasing out conventional carriers,&#8221; said Toshiyuki Shikata, a defense expert and a former Japan Ground Self-Defense Force lieutenant general. &#8220;If there are two [types], then the conventional carrier is better.&#8221;

But he believes that Japan had to accept a nuclear carrier because a carrier is necessary in Japan to fulfill the U.S.-Japan Security Agreement.

&#8220;It is important that a carrier is forward deployed for it to operate effectively,&#8221; Shikata said. He points to the threats of North Korea and China&#8217;s recent reported naval buildups.

However, not all experts believe that the North Korea and China are threats to the region.

Tetsuo Maeda, an international relations professor at Tokyo International University in Saitama prefecture, points out that the only threat North Korea poses are missiles such as Taep&#8217;o-dong and Nodong, which he says do not require a carrier to defend against.

He also argues that the U.S.-Japan Security Agreement may need to be revised based on U.S. decisions to do away with conventionally powered carriers. The agreement is designed for the security of Japan and peace and stability of the Far East.

However, he added, military officials wanting to assign a better, more capable carrier might be indicating they want to increase the capability more than needed in the region.

&#8220;If they want to focus the attention on higher capability, then the security agreement is meaningless,&#8221; he said.

Public opinion is another major factor.

Shikata said Japan has renounced the production, possession and entry of any nuclear weapons.

Japanese generally approve the use of nuclear energy for peace, but are against anything nuclear related to the military.

&#8220;It is natural for the public opinion to oppose to a nuclear carrier,&#8221; Shikata said. Also, some people fear it would be a possible terrorist target.

Still, the Japanese government has accepted the decision to allow a nuclear carrier at Yokosuka and experts believe that it is determined to see it through.

&#8220;The government of Japan has to continue to convince the public with patience,&#8221; Shikata said.