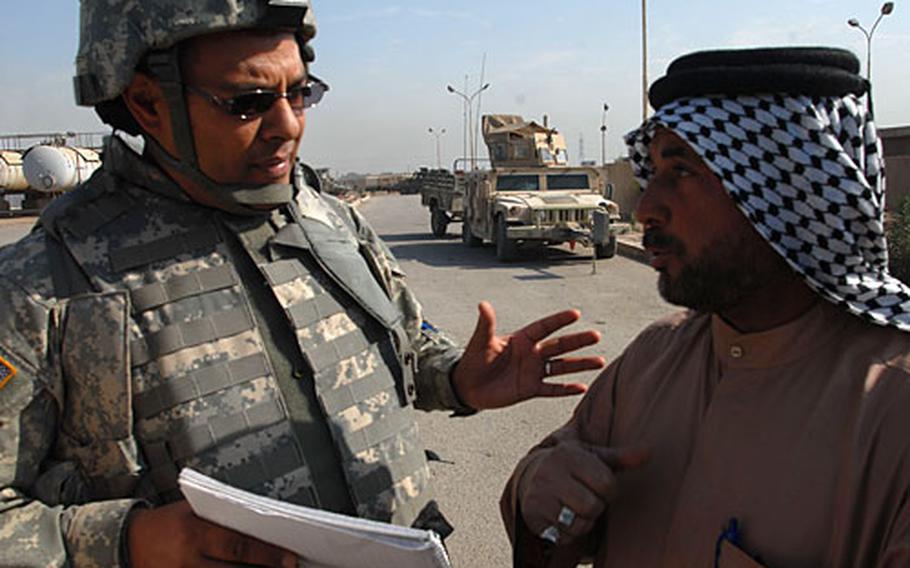 The team of academics, which includes a social scientist, two cultural analysts and a military liaison officer, is charged with bringing cultural awareness to the Army and studying the ethnic makeup of Iraqi populations so commanders can plan courses of action, governance, patrols and provision of essential services accordingly, said HTT member Fouad Lghzaoui.

The Moroccan-born cultural analyst, who studied geography and Arabic literature at the University of Morocco, said the team helps units deal with some of the unfamiliar quirks of Iraqi culture.

&#8220;For example, for an infantryman (the Iraqi practice of) holding hands or kissing another man cheek to cheek is a hard thing to get used to,&#8221; he said.

Another team member, Lisa Verdon, is a Fulbright scholar to Jordan and has a master&#8217;s degree in Arabic international studies from the University of Pennsylvania. But the 43-year-old social scientist is far from academia&#8217;s ivory towers these days, walking some of Baghdad&#8217;s meanest streets with U.S. soldiers as she studies the population.

The blonde-haired, blue-eyed, Arabic-speaker, who sports a pair of pink Oakley sunglasses and smokes multicolored cigarettes, comes across as a sort of female Indiana Jones, but likes to compare herself to Gertrude Bell and Wilfred Thesiger, two British academic pioneers of Middle East studies.

When she&#8217;s interacting with the population in Baghdad, she never asks Iraqis directly whether they are Sunni or Shiite, she said.

Verdon is working on studies of propane distribution to Iraqis by the Coalition and reconciliation between Sunnis and Shiites in Baghdad, she said.

&#8220;The influence coalition forces have at the propane distribution point is very different with different units. Some units are very involved in making sure the people get the propane. Others take a hands-off approach,&#8221; she said.

Verdon said she has observed successful reconciliation at Combat Outpost Ellis in Baghdad&#8217;s Radwaniyah neighborhood where soldiers from Schweinfurt&#8217;s 1st Battalion, 18th Infantry Regiment have driven al-Qaida out and brought locals together.

Now she&#8217;s making trips with the Strykers to the recently occupied Combat Outpost Aztec, on the outskirts of the city, to examine reconciliation in its formative stage.

Relative peace in Anbar province and the increase in Iraqi forces pulling security is freeing up more U.S. forces to work on reconciliation, she said.

&#8220;The Sunni and Shia have lost a lot of lives. There is a lot of anger, frustration and revenge. Reconciliation is about bringing them together. It is about forgiveness,&#8221; she said. &#8220;You are asking a father to forgive the Sunni for the death of his son and put what happened in the past behind them to move forward for peace stability and a reunified Iraq.&#8221;

&#8220;Everyone from the privates up through commanders is very astute because there is so much interaction with Iraqis. Maybe a private doesn&#8217;t articulate it the same way an officer would but they understand what is going on,&#8221; she said.