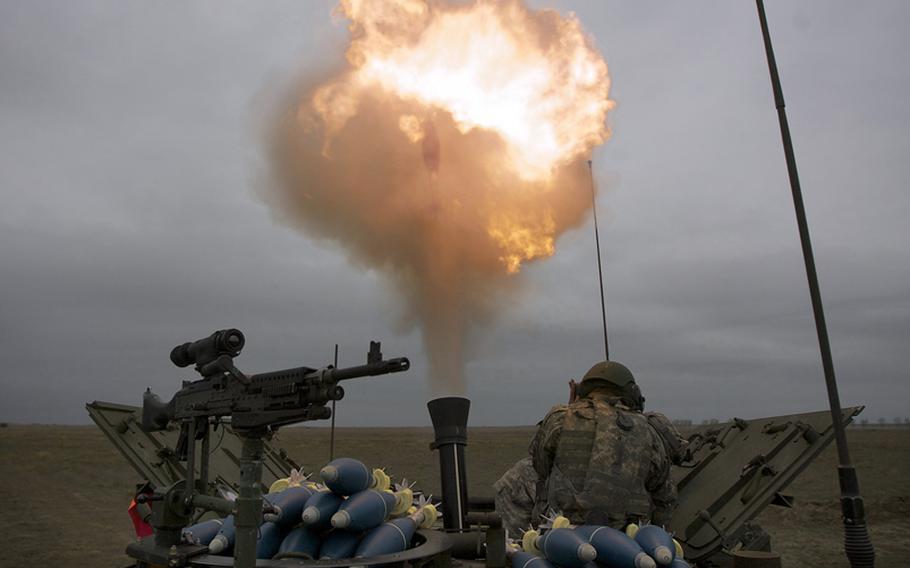 U.S. soldiers cover their ears as a long-range training round is fired out of a 120 mm mortar during live-fire training in Romania in October 2009. (Defense Department)

WASHINGTON &mdash; For months, lawmakers and military leaders have issued dire predictions about what might happen if Congress doesn&rsquo;t stop the $500 billion in automatic defense spending cuts set to start in January.

Perhaps the most frightening warning issued by defense officials came earlier this month, when Deputy Secretary of Defense Ashton Carter said that Pentagon planners could not insulate troops deploying overseas from the budget trims.

&ldquo;There is always money left over,&rdquo; said retired Col. Peter Mansoor, the Raymond E. Mason Jr. Chair in military history at Ohio State University and a key Army adviser in Iraq during the 2007 surge. &ldquo;Whoever claims that they're going to cut predeployment training is putting out a threat that they won&rsquo;t follow through on.&rdquo;

At issue is how the budget cuts are structured, and how the military&rsquo;s money is spread among various agencies.

When Congress adopted the Budget Control Act last summer, it included more than $1 trillion in future budget cuts &mdash; spread evenly between military and nonmilitary program spending. The threat was to be so unpalatable that it would force agreement on other deficit-reduction proposals.

Those automatic cuts, known as sequestration, were supposed to be painful not just because of their size but also because of how they&rsquo;ll be implemented, said Todd Harrison, a fellow for defense budget studies at the Center for Strategic and Budgetary Assessments.

&ldquo;The way the law is written, these cuts are uniform across all the agency accounts,&rdquo; he said. &ldquo;The law said the president could exempt personnel funds from sequestration, but everything else would be affected.&rdquo;

Army and Marine Corps officials declined to say exactly what that would mean for training and equipping troops. Carter said the department will have some flexibility to push the impact of budget cuts onto future deploying units, rather than hurting those already serving in Afghanistan.

However, &ldquo;it is not possible to devise a plan that negates these consequences substantially,&rdquo; he told the lawmakers.

Harrison said of all the sequestration threats &ldquo;this one is less overplayed than the others.&rdquo; Unless a deal is reached, the budget cuts will squeeze resources available for combat training and pre-deployment preparation.

But that doesn&rsquo;t completely handcuff the Pentagon.

&ldquo;What the Defense Department can do is ask Congress to move money around to cover that,&rdquo; he said. &ldquo;They couldn&rsquo;t just reassign the money, they&rsquo;d need permission to move those funds. But I can&rsquo;t see any way Congress would refuse that.&rdquo;

Mansoor went further, saying that no military commander would allow their units to head unprepared downrange.

&ldquo;There might be a symbolic cut in training, if they wanted to show some effect,&rdquo; he said. &ldquo;But I think this is really just a shot across the bow of Congress.&rdquo;

It remains to be seen if that type of wake-up call will work.

House Armed Services members from both parties decried the devastating effects of sequestration following Carter&rsquo;s remarks, but most of those lawmakers have publicly lamented the potential cuts for months. Defense contractors began sending out job warnings to employees about sequestration in July, but that failed to spur any new action on Capitol Hill.

The White House next month is required to outline exactly how the sequestration cuts will be implemented, giving a more detailed view of what programs and jobs would be affected. Congress passed the law requiring that report earlier this month, hoping it might spur members to action.

Defense Secretary Leon Panetta and other top military officials have repeatedly pleaded with Congress to repeal the sequestration cuts, but Democrats and Republicans have been deadlocked over the nondefense budget issues and the inclusion of tax increases in a deficit-reduction solution.

&ldquo;In the end, this has very little to do with defense and everything to do with taxes and entitlements,&rdquo; Harrison said. &ldquo;Nobody likes what this could do to defense spending, but both sides are playing a game of chicken, figuring the other side will never let these cuts go into effect.&rdquo;