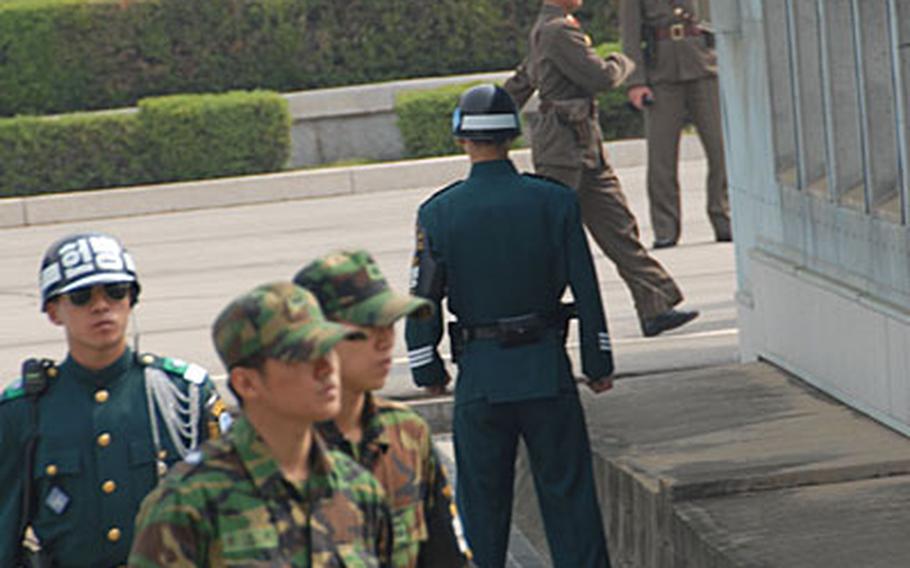 In this May file photo, South Korean and North Korean guards patrol the Demilitarized Zone near Panmunjom before South Korean officials crossed into North Korea for a meeting. According to South Korean news reports, President Roh Moo-hyun will propose during an inter-Korean summit next week that both countries withdraw their guards from the border. (Ashley Rowland / S&S)

SEOUL &#8212; Experts say it&#8217;s unlikely that North and South Korea will withdraw their soldiers from the 155-mile Demilitarized Zone, even if South Korean president Roh Moo-hyun suggests doing so during a summit between the two countries next week.

Two South Korean newspapers reported Thursday that Roh will propose removing South Korea&#8217;s 100 guard posts and North Korea&#8217;s 280 guard posts from the DMZ at the second conference between the two nations next week. JoongAng Daily cited &#8220;a high-ranking administration official&#8221; in its story, and Herald Media did not name a source.

Col. Franklin Childress, a spokesman for the U.N. Command, the American-led military organization responsible for maintaining the armistice agreement that halted combat in 1953, said South Korea had not asked &#8220;for a position on the potential of removing guard posts&#8221; within the DMZ.

Both Koreas are unlikely to agree to remove their guards, professors say. But even if both countries want to, they say a withdrawal could ultimately come down to U.N. Command approval.

&#8220;What is needed to make it happen is the consent of the U.N. Command, because things that happen in the DMZ are still under its control,&#8221; said Kim Yong-hyun, professor of North Korean studies at Dongguk University in Seoul. He said North Korea will not agree to withdraw its guards from the DMZ until it normalizes relations with the United States.

Michael Breen, author of &#8220;The Koreans&#8221; and president of a public relations company in Seoul, said North Korean leader Kim Jung Il doesn&#8217;t trust South Korea or the United States enough to withdraw his border guards. Kim may not even respond to Roh&#8217;s proposal &#8212; if it comes &#8212; since the South Korea president leaves office in February.

&#8220;Korea would need to make a proposal like that in consultation with the U.S., because the U.S. is partly responsible for Korea&#39;s defense. You don&#8217;t go changing your defensive posture just to make a political point,&#8221; he said.