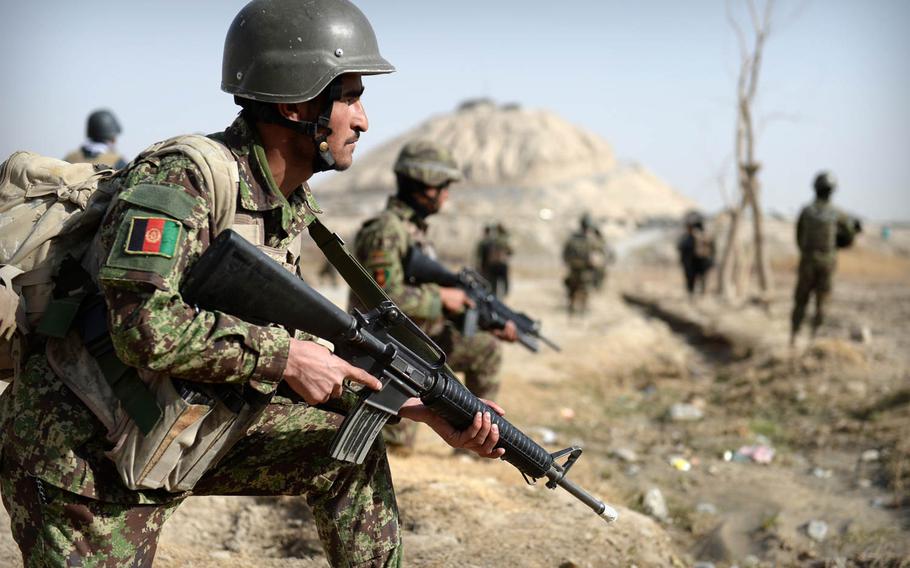 Afghan National Army soldiers provide security during a patrol in Kandahar province in January 2015, shortly after the NATO-led coalition officially transferred all responsibility to Afghan forces. (Josh Smith/Stars and Stripes)

Afghan National Army soldiers provide security during a patrol in Kandahar province in January 2015, shortly after the NATO-led coalition officially transferred all responsibility to Afghan forces. (Josh Smith/Stars and Stripes) 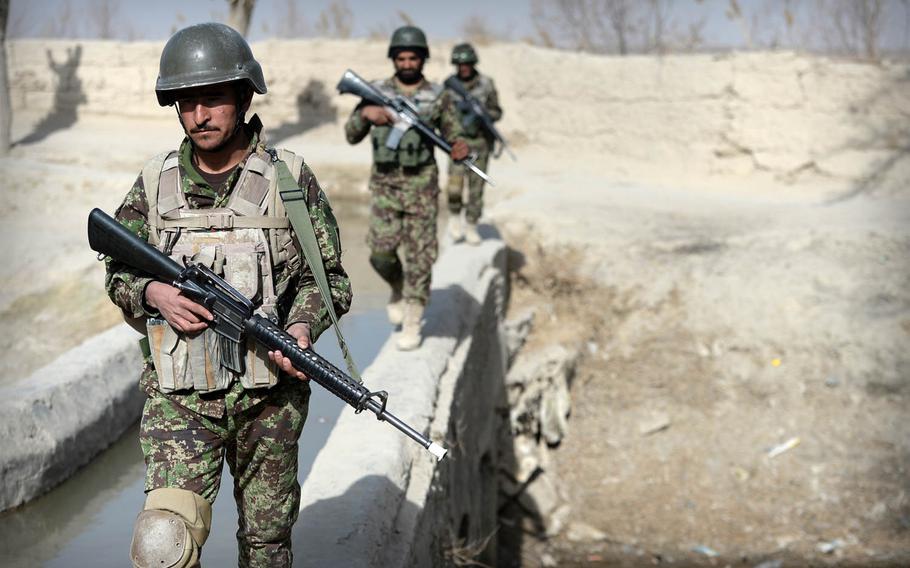 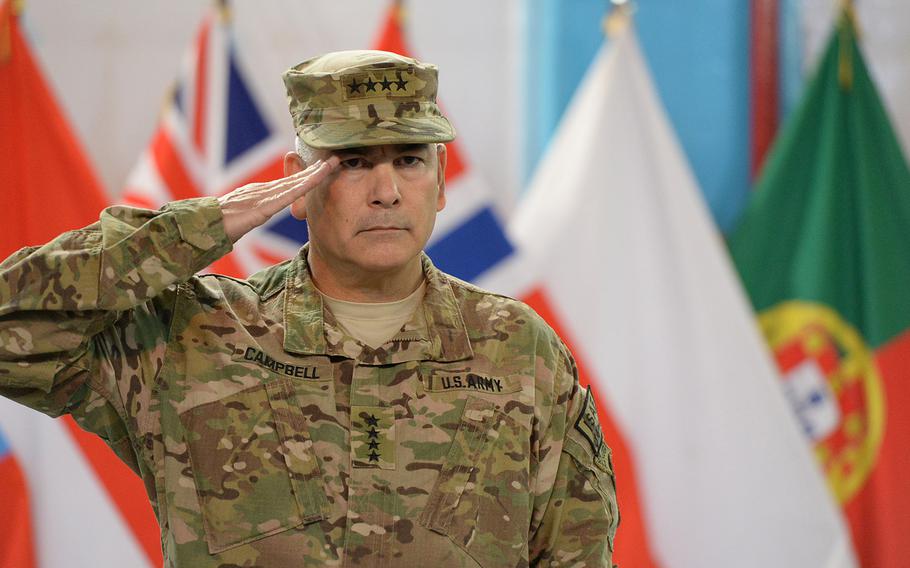 Gen. John Campbell, commander of the U.S.-led International Security Assistance Force (ISAF) in Afghanistan, salutes at a ceremony in Kabul on Sunday, Dec. 28, 2014, marking the change of the military coalition's mission to one more focused on training and advising. (Heath Druzin/Stars and Stripes) 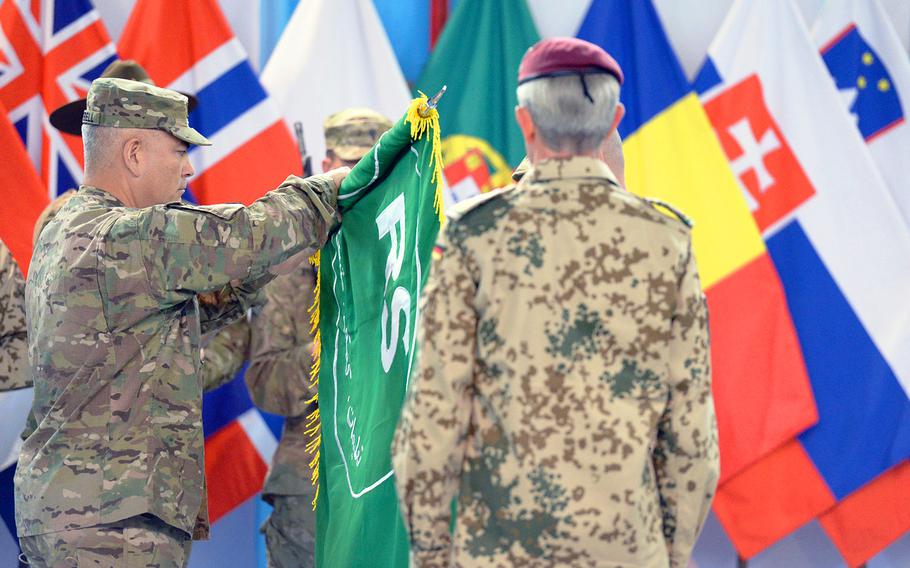 Gen. John Campbell, commander of the U.S.-led military coalition in Afghanistan, unfurls the flag of Resolute Support, the name of the new military mission in the country that will focus on training and advising Afghan forces. The ceremony on Sunday, Dec. 28, 2014 in Kabul marked the end of the International Security Assistance Force. (Heath Druzin/Stars and Stripes)

KABUL, Afghanistan — Last year was the deadliest in Afghanistan for both troops and civilians since the U.S. invaded the country in 2001, with an entrenched Taliban moving to reassert control over former strongholds.

As international military forces scale back, though, coalition military leaders continue to paint a picture of a country emerging from war, a message that has been repeated for 13 years. It is an upbeat view that some experts worry threatens to undermine reconstruction efforts.

“There is no turning back to the dark days of the past,” Gen. John Campbell said during a Dec. 28 ceremony in Kabul marking the end of a 13-year, U.S.-led combat mission. “The insurgents are losing and desperate.”

Some of the major achievements often cited by U.S. civilian and military leaders since 2001 are indeed significant, including improvements in women’s rights, education and medical care. Most notable is that the U.S.-led International Security Assistance Force built a 350,000-strong Afghan security force, which is largely fighting on its own.

But Campbell’s assertion that Afghan forces “overmatch the enemy wherever and whenever they meet” is hard to reconcile with the heavy casualties Afghan forces are suffering: more than 5,000 were killed last year, according to the Afghan military, more than double the number of U.S. troops killed throughout the war. That’s a rate Lt. Gen. Joseph Anderson — then the commander of ground forces in Afghanistan — called “unsustainable” in November. With Afghan forces short on military equipment, air power and medevac capabilities, few analysts see any scenario wherein Afghan forces can defeat the Taliban on the battlefield.

In addition, the drawdown of international forces and the parallel reduction in the number of foreign contractors and aid workers has dealt a further blow to an economy dependent almost entirely on foreign aid — the U.S. pays the salaries of the Afghan security forces.

While the U.S. and its allies have touted elections that led to the first peaceful transfer of power in the country’s history, the government is still struggling to get parliamentary approval for a full Cabinet nearly six months after President Ashraf Ghani and his election rival, Abdullah Abdullah, the government’s chief executive, took office after sparring bitterly over election fraud.

Despite these signs of potential instability, military leaders and politicians continue to portray Afghanistan as a country making steady progress. That can have damaging consequences, experts say.

“The overly positive assessments are repeated so often that the leaders in the military and civilian world start to believe it,” said Thomas Ruttig, who served as a German diplomat and U.N. official in Afghanistan and is now co-director of the Kabul-based Afghanistan Analysts Network. “If you don’t talk about the problems, you can’t solve the problems.”

What is striking is that the military’s narrative, no matter the circumstances, has remained consistent throughout the war: Afghan forces are effectively fighting insurgents, the Taliban is weakening.

As far back as April 2005, Lt. Gen. David Barno, then the commander of Combined Forces Command, Afghanistan, made a bold prediction about the collapse of the Taliban.

“The diverging organization that I see evolving over the next year or so (involves) much of the organization, probably most of it, I think, collapsing and rejoining the Afghan political and economic process.”

But the Taliban proved so strong that four years later, President Barack Obama decided a massive troop surge was necessary. Even in that context, generals made bold predictions. On the eve of the surge in December 2009, Gen. Stanley McChrystal, then commander of ISAF, told the Senate Armed Services Committee that in two years, the Taliban would be all but defeated.

“Additional forces will begin to deploy shortly, and by this time next year, new security gains will be illuminated by specific indicators and it will be clear to us that the insurgency has lost the momentum,” he said. “By the summer of 2011, it will be clear to the Afghan people that the insurgency will not win, giving them the chance to side with their government.”

The surge did bring limited peace to certain areas of the south, including a drop in violence in the region’s largest city, Kandahar. However, not only did the extra troops fail to quash the Taliban, but deaths attributed to the war are significantly higher now than before the surge.

In a 2012 report, “Dereliction of Duty II,” published in the Armed Forces Journal and submitted to Congress, U.S. Army Lt. Col. Danny Davis severely criticized senior U.S. military leadership for “deception” that “has damaged America’s credibility among both our allies and enemies, severely limiting our ability to reach a political solution to the war in Afghanistan.”

Davis, who is still in the Army, said he has seen no change since his report.

“Their message has always been the same — it’s like it’s just on autopilot,” he said. “The conditions and circumstances that actually exist on the ground don’t seem to be a factor.”

Coalition officials reject the notion that they are glossing over problems, noting that they have acknowledged areas in the Afghan security forces, such as logistics and intelligence-sharing, that still need improvement.

“I think ISAF has been forthcoming that there are continued challenges,” Col. Brian Tribus, director of public affairs for ISAF and now for Resolute Support, said in a December interview.

Based on the Pentagon’s most recent “1230” report, which tracks “progress toward security and stability in Afghanistan,” coalition officials say the level of violence is going down in the country. But aid workers who tally casualties and experts tracking the arc of the war disagree.

A recent report from the International Committee of the Red Cross said staff had transported 37 percent more wounded and more than double the number of dead combatants from the battlefield in 2014 compared with 2013.

Tribus defended the finding that “enemy-initiated attacks” were down 25 percent in the first 11 months of 2014 compared with the year before. He said the media focuses too heavily on the negatives in Afghanistan and gives undue attention to spectacular attacks in Kabul.

“(From) the Western press, the story is mostly negative,” Tribus said. “Folks don’t take the time to step back and talk about the progress that’s been achieved, that our efforts have led to that progress and have been successful.”

Nevertheless, some experts, citing casualty numbers and their own reporting from the provinces, have come to a different conclusion.

“They’re still reporting that violence is diminishing in Afghanistan in the latest 1230, which is now borderline insane,” said Graeme Smith, the International Crisis Group’s senior analyst in Afghanistan, who has spent years in the country as a journalist and researcher.

“You’re saying the war is getting smaller, and it’s not; it’s getting a lot bigger. Policy needs to adjust to deal with the fact that the inferno is growing.”

You don’t have to look very far back for security fallout from overly positive messaging about American military gains against an insurgency, said Ahmad Majidyar, a scholar at the American Enterprise Institute and frequent adviser to the U.S. military.

December 31 marked the end of the ISAF, the NATO-led mission tasked with battling the Taliban and bolstering faith in the fragile Kabul government. On Jan. 1, a greatly reduced force of roughly 13,000 troops shifted to a new mission, Resolute Support, which is focused primarily on training and advising but will allow troops to engage in combat only if threatened and to provide air support as it is deemed warranted.

Several thousand additional U.S. forces outside the NATO mandate are tasked with continuing counterterrorism against al-Qaida and its supporters as well as logistics and administrative support tasks. Campbell is now saying those troops should be pulled out more slowly than originally planned.

With international forces maintaining they no longer have an inherently combat-focused role, the coalition has stopped publicly releasing statistics on violence in the country, saying that is now for the Afghans, themselves, to provide. But some analysts see a calculated move on the part of the coalition.

“In the beginning, you were getting very optimistic reports from them, but the insurgency is still there and in most of the areas, you cannot conclude it has been significantly weakened,” Ruttig said.

Recent remarks by Sen. Carl Levin, the long-time chairman of the Senate Armed Services Committee who spoke before retiring at the end of 2014, reflect the kind of misperception among decision-makers that experts like Ruttig worry will imperil the continued rebuilding effort that is expected to take more than a decade. Donor countries already have pledged $16 billion in aid through 2016.

After complaining about negative media coverage of Afghanistan, Levin, who had been involved in critical decisions about funding for the U.S. effort in Afghanistan, told The Washington Post in late December that “health is better, security is better, the economy is better … You can walk in Kabul. There may be a bomb going off every other month or week, but there’s a lot of economic activity going on that wasn’t there before.”

Such rhetoric about improvements in the economy, health care, and other social indicators obscure looming crises, such as the massive loss of jobs that has come with international militaries and civilian organizations scaling back efforts, Ruttig said.

“There’s a lot of social dynamite piling up,” he said.