Experts: Diplomacy, though off table now, is long-term answer in Syria 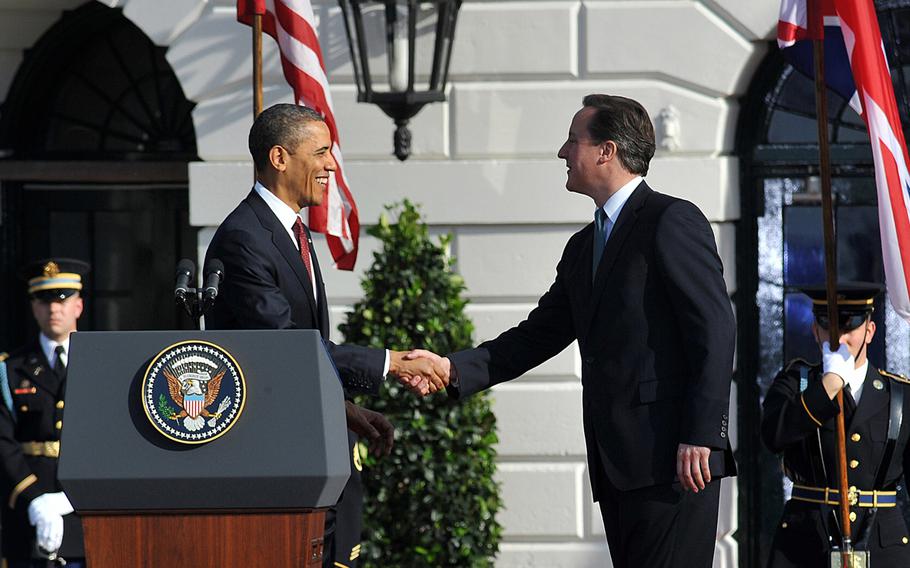 NAPLES, Italy — When British Prime Minister David Cameron went before Parliament last week in search of support for punitive military strikes against Syria, he presented a stark choice: Members could support military action or condone the use of chemical weapons.

Roughly the same choice stands before Congress, with the same absence of a diplomatic alternative. President Barack Obama argues that military force is the only solution to punish a regime he claims broke international prohibitions by its alleged use of sarin nerve agent in an Aug. 21 rocket attack on rebel-held areas.

Yet some longtime observers of Syria’s grinding civil war say the abandonment of diplomatic efforts and rush to military force is shaping up to be a questionable — and likely counterproductive — distraction from resolving a conflict that has claimed tens of thousands of lives and destabilized the region. They say diplomacy remains the best solution in light of Western powers’ rejection of full military intervention, and they wonder how those negotiations will fare in the aftermath of even a limited military strike.

“I think the conditions (for a diplomatic pivot) would be worse post-strike,” Daniel Levy, a researcher with the European Council on Foreign Relations in London, said in a telephone interview.

Levy is co-author of a council paper published last week that called for an “all-in” effort at diplomacy in response to the chemical attacks. It suggested waiting for a report by U.N. inspectors and using U.N. channels to challenge Russia and China, Security Council members who have deflected efforts to sway the Syrian regime.

A U.N. report confirming U.S. allegations would put Russia and China on the defensive, the report argues, whereas using military force in the Middle East could turn the subject away from President Bashar al-Assad and toward the U.S. and its motives.

“Why don’t we put this to the inspectors?” Levy said in the interview. “Why would you oppose a resolution that expands the mandate of the inspectors to make a determination of responsibility?”

Further effort could focus on putting more inspectors in Syria and potentially safe-guarding chemical weapons during a broader diplomatic effort to end the war, the report said.

Efforts to resolve the larger civil war between the regime of Assad and a loose assemblage of rebel fighters should continue, the council paper argues, even if they’ve shown little progress in the past. A second Geneva conference, a follow-up to June’s meeting between Russia, China and Western powers including the U.S. and Britain, would be a step in the right direction, the authors suggested, as would the meeting that Russia and the U.S. originally scheduled this week in The Hague.

Those talks were canceled in light of the current situation, and Russia suggested Monday that a military strike against Syria would threaten a second conference in Geneva.

Other hurdles stand in the way of a diplomatic resolution. Russia would need to soften its support of the Syrian regime, analysts say, and the U.S. would have to ease its opposition to Assad and allow Iranian participation in negotiations. The two sides of the conflict, as well as stakeholders such as Iran and Saudi Arabia, would have to agree on a power-sharing agreement between the regime and its opposition, an outcome that the International Crisis Group, an organization with analysts in Syria, deemed fantasy in its June report on the country.

“The optimal solution — a negotiated, diplomatic one — at this stage belongs pretty much to the world of make-believe,” its authors wrote.

The United Kingdom has said it will continue to push for the Geneva talks after Parliament rejected Cameron’s bid for military action. Washington, meanwhile, appears to be getting closer to approving strikes after key congressional leaders backed the president’s call for force, although some senators raised their doubts during a Tuesday hearing.

Kerry said the administration is still working through the United Nations.

Andrew J. Bacevich, a former Army officer and Boston University professor critical of U.S. military involvement in the Middle East, has said that Obama “backed himself into a corner” by calling chemical weapons use a “red line” for the nation. Congressional leaders are more concerned about credibility than whether force is a pragmatic option, he said.

“What we have in Syria and more broadly in the Islamic world is an abundance of evidence that the use of force doesn’t in fact work,” Bacevich said in an interview with Stars and Stripes.

Analysts like Levy and his co-authors have criticized efforts by some leaders and proponents of force to separate chemical weapons use from the broader civil war, which has killed more than 100,000 and threatens to destabilize neighboring countries such as Jordan, which has taken in tens of thousands of Syrian refugees crossing its border.

“This is kind of, again, flirting with the military option instead of really committing to a military intervention designed to alter the outlines of the conflict,” Anthony Dworkin, a researcher at the council, said in a phone interview.

The consequences of a strike on future diplomatic efforts remain unclear, the analysts say. While some observers believe upholding the chemical weapon “red line” would pave a path for resumed negotiations under favorable terms, others say it will embolden both sides in the conflict and alienate stakeholders like Russia and Iran.

It could also present thornier questions as the civil war continues, Dworkin said.