Experts: Costs for upgrading weapons will put further pressure on US forces 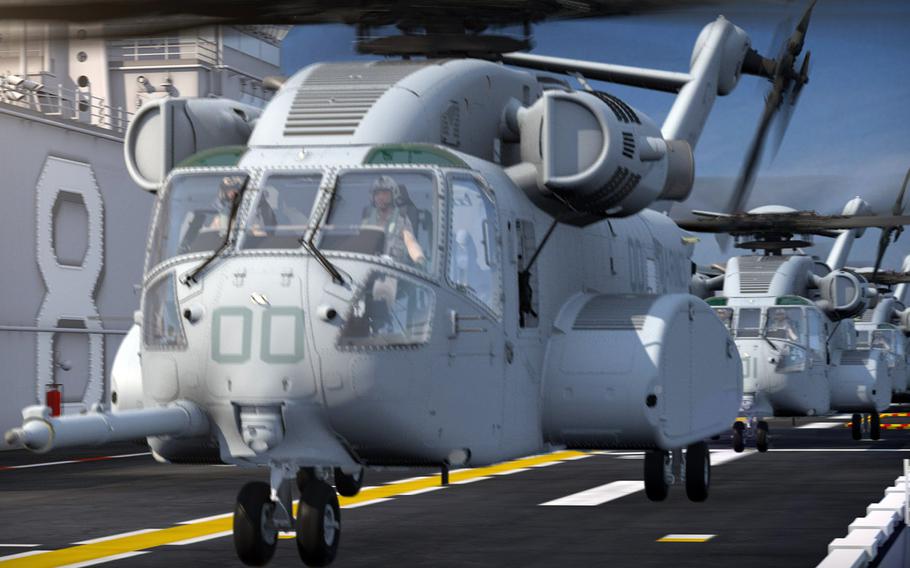 The schedule to replace worn systems such as the Marine Corps' CH-53 Super Stallion helicopter with the new CH-53K King Stallion, shown here, “keeps getting pushed further and further into the future,” a defense analyst said. (Sikorsky Aircraft)

WASHINGTON — The Pentagon faces a 23 percent increase in costs for its major weapons in the next six years, adding pressure to its ability to fund other needs, defense analysts warned Wednesday.

Spending will peak at roughly the same time in the 2020s for dozens of major weapons programs, including the Air Force’s new Long Range Strike Bomber, the F-35 Joint Strike Fighter, the Ohio-class ballistic nuclear submarine replacement program and the replacement of the Minuteman III Intercontinental Ballistic Missile, said Todd Harrison, director of budget analysis at the Center for Strategic and International Studies, a nonprofit policy group in Washington, D.C. The fiscal bottleneck could force the next president into some tough budget choices, said Harrison, who was one of three defense experts at the center to speak Wednesday about the Pentagon’s future spending needs.

“When the next administration takes office in January 2017, it will need to make many difficult choices to rationalize long-term defense modernization plans with the resources available,” he said.

The large cost – estimated to average more than $90 billion each year by 2022 for just the Defense Department’s top acquisition programs – is a result of a decade of deferred modernization spending in order to afford the wars in Iraq and Afghanistan, Harrison said.

As a result, the schedule to replace worn systems such as the Marine Corps CH-53 Super Stallion helicopter with the new CH-53K King Stallion “keeps getting pushed further and further into the future,” Harrison said.

Though operations in Iraq and Afghanistan spurred major procurement programs, such as production of more than 18,000 mine-resistant, ambush-protected uparmored vehicles and dozens of C-27 Spartan transport aircraft, the purchases have not helped the military modernize, Harrison said.

“For the most part, war-related acquisition funding was not used to modernize and recapitalize the inventory of equipment,” he said. The C-27, for example, was retired almost as soon as it was purchased.

Andrew Hunter, a senior fellow for international security at the center, said the need to modernize also will compete with an uncertain security environment that continues to increase spending for war operations.

“It turns out Afghanistan didn’t go away as much as we thought,” he said.

The rise of the Islamic State group in Iraq and Syria and the conflict in Ukraine could mean the Pentagon will not get the reprieve in wartime spending it could have been counting on to reset its forces.

It also could mean cost-cutting elsewhere in the DOD budget, such as further troop reductions, said Mark Cancian, a senior adviser on international security at the center.

The White House is expected to unveil its 2017 budget proposal in early February. Defense Secretary Ash Carter will discuss the 2017 DOD budget on Feb. 2, according to Peter Cook, Pentagon press secretary.

Two months ago, Congress passed the DOD’s 2016 National Defense Authorization Act after almost a year of disagreements between the Democrats and Republicans over the policy and spending plan. President Barack Obama vetoed the bill’s first version fueled by disagreements about closing the detention facility at Guantanamo Bay, Cuba, and how the Overseas Contingency Operations war budget, or OCO, was not subject to mandated spending caps.

In the bill passed in December, Congress set defense base spending, which includes money for operations and maintenance, personnel and procurement, at $514.1 billion and the separate OCO account at $58.6 billion.

It also set the spending cap level for base defense and OCO spending for 2017 at just slightly more than 2016 levels, in order to avoid a similar yearlong debate on spending.

“We’re probably not going to see a lot of change in the top line – all indication is the administration will stick to the funding levels” set in the 2016 bill, Cancian said.