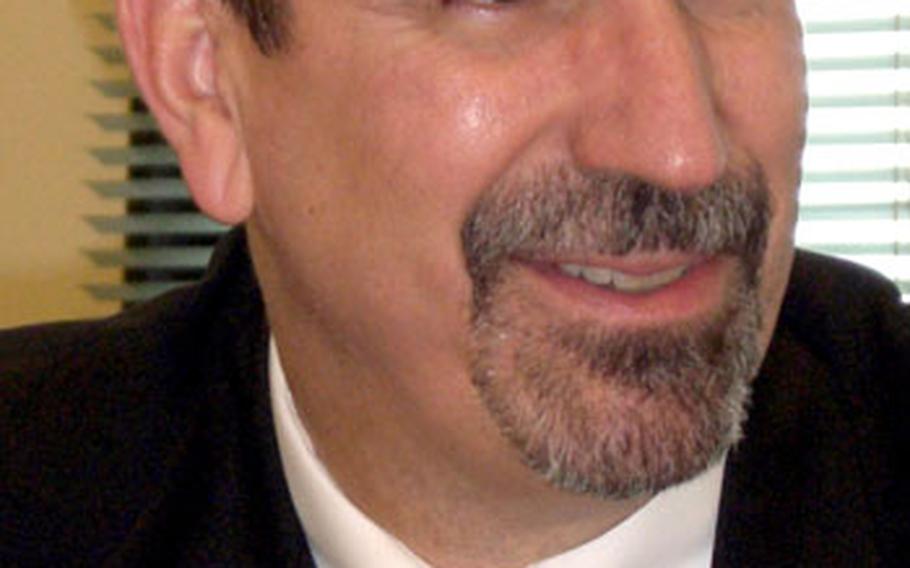 Lance Gatling, an aerospace and defense consultant based in Tokyo, says Japan&#39;s defense against a missile attack from North Korea is on track. (Chiyomi Sumida / S&S)

NAHA, Okinawa &#8212; Japan and the United States are in an excellent position to counter the threat of North Korea&#8217;s development of nuclear weapons and ballistic missiles, a Tokyo-based aerospace and defense consultant said Thursday at the U.S. Consulate on Okinawa.

North Korea&#8217;s test-firing of a missile over Japan last July and a nuclear test in October is proof the country is developing the capability to strike a crippling blow to Japan, said Lance Gatling, a former State Department foreign officer who now heads a defense and space consulting firm.

Japan is particularly vulnerable because it is so close to North Korea and nearly half the population is in just four urban centers, primarily Tokyo, Gatling said.

Gatling said the U.S. and Japan have developed a missile defense plan to counter such a threat.

U.S. and Japanese destroyers armed with Aegis missiles patrol the Sea of Japan. Japan is rapidly deploying PAC-3 missiles around Tokyo and other major urban areas, he said, and has been assisted by the recent deployment of a U.S. PAC-3 battery on Okinawa.

An integrated detection system should be able to catch a missile threat in time to respond, he added, likening the ability to detect incoming missiles by radar and heat-detecting satellites to having the edge in a game of &#8220;whack-a-mole.&#8221;

In Washington on Tuesday, Air Force Lt. Gen. Henry Obering, head of the U.S. Defense Department&#8217;s Missile Defense Agency, said a Japanese Aegis-equipped destroyer will test-fire a U.S. interceptor missile called a Standard Missile 3 by the end of the year.

In a written testimony to the House Armed Services Committee&#8217;s Strategic Forces Subcommittee, Obering said it will be &#8220;the first such firing by a maritime ally.&#8221;

&#8220;We initially turned our attention to North Korea, because we felt that had the higher sense of urgency and we believe that was somewhat justified by the activities last summer,&#8221; Obering stated.

Gatling said concerns that a missile defense system is somehow provocative are baseless.

It&#8217;s the same message coming from Obering. At a State Department briefing he said missile defense weapons are not offensive weapons.

&#8220;They do not even carry warheads,&#8221; he said. &#8220;There are no explosives on these missiles. We operate on a hit-to-kill technology, which is we actually drive a very small kill vehicle into an enemy warhead to destroy it.&#8221;

Gatling said the State Department brought him to Okinawa to conduct a series of briefings for local journalists and government officials on the missile defense system being developed by the U.S. and Japan.