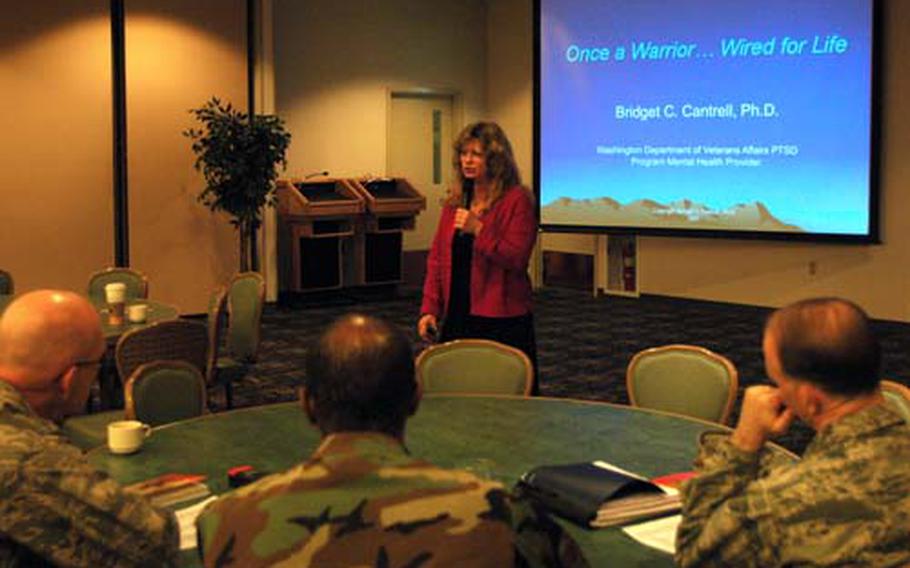 YOKOTA AIR BASE, Japan &#8212; In the "tough it out" and "never let them see you sweat" culture of the military, reaching out for help can be hard for those suffering from harmful stress.

That&#8217;s why Pacific Air Forces invited Dr. Bridget C. Cantrell, a licensed mental health counselor specializing in post-traumatic stress disorder, to give workshops at bases throughout the Pacific. In the past couple of weeks, she visited Kadena Air Base and Misawa Air Base. She was wrapping up her Japan trips Thursday and Friday at Yokota.

"Stress is not one-sided, particularly when one is stationed overseas," Cantrell said Thursday during a break in the workshop, explaining that severe reactions to stress can affect anyone, not just troops engaging in direct combat outside the wire.

From the medic in the field hospital treating his wounded comrades, to the spouse running the household and dealing with the children alone, stress from war has a broader impact than one might think, she said.

However, she pointed out, stress is not a sign of weakness and can be positive if you respond to it correctly.

Reacting to stress positively can be a motivator and improve confidence in knowing that you can handle a tough situation, Cantrell said.

But no matter how you handle it, Cantrell said there is a negative side to stress.

"It&#8217;s normal that you come home from a deployment and may have trouble sleeping or be more impatient in certain situations," she said, explaining that such behavior isn&#8217;t a sign of mental illness, but is a reaction to your experiences.

"My message is they need to know signs and symptoms of stress," she said. "And that if it gets to be too much, it is OK to get outside help."

Having worked with the military for nearly 20 years, she said she has seen a dramatic shift in how the military is addressing and treating combat-related stress.

"There is a lot of innovative things going on," she said, mentioning virtual reality simulators, acupuncture and a technique using patterns of light, sound or touch, known as eye-movement desensitization reprogramming, or EMDR.

"[The military] is opening up to reach more people," she said, "instead of just having one tried and true technique to use on everybody."