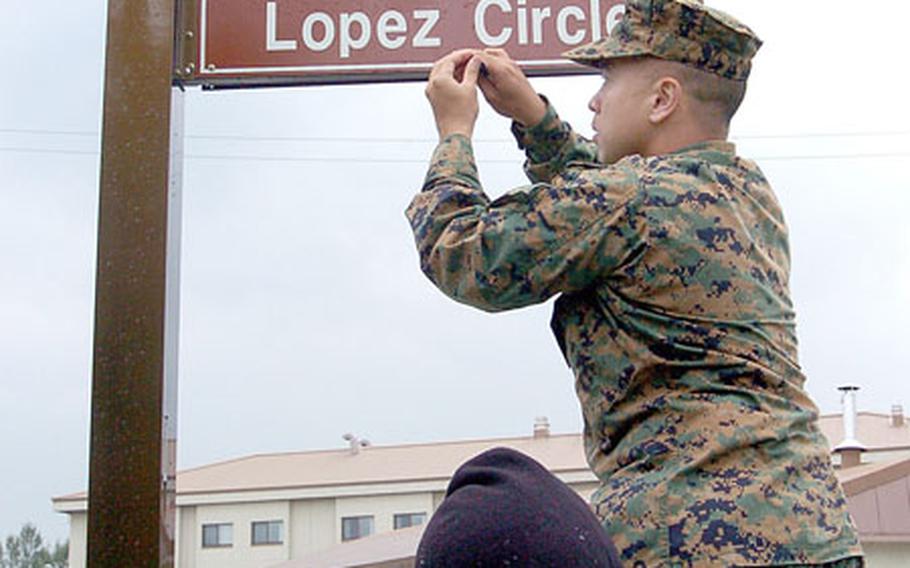 It also will preserve the history of the U.S. military and its South Korean ally by naming its streets, buildings, ponds, gates and other places after some of the distinguished names of the two allies&#8217; military past, Army officials told Stars and Stripes.

U.S. Medal of Honor recipients and other servicemembers who achieved acclaim during their military service will be among those whose names will be memorialized, said Army Col. Michael J. Taliento Jr., commander of the Area III Support Activity at Camp Humphreys.

Military units and pieces of military equipment &#8212; helicopters, for example, that might have been a key part of the U.S. military presence in South Korea &#8212; also could be recognized, he said.

&#8220;The overarching piece to this is that as we look to the future, we&#8217;re going to look to ensure that there&#8217;s an appropriate naming convention in place to accurately document and memorialize people, organizations, equipment that have contributed to the success of the alliance and to the success of our mission here in Korea, and to do it in a reverent, respectful and honorable manner,&#8221; Taliento said.

Gen. Leon J. LaPorte, who as commander of U.S. Forces Korea is the top American military leader in South Korea, has taken a personal interest in the process, Taliento said.

Work on expanding the base is scheduled to be completed in 2008.

On Sept. 2, officials held a ceremony at which they named a section of road the &#8220;Lopez Traffic Circle&#8221; in memory of a Medal of Honor recipient from the Korean War, Marine 1st Lt. Baldomero Lopez. Marine and Army personnel attended.

Lopez died Sept. 15, 1950, during Gen. Douglas MacArthur&#8217;s invasion at Inchon, now spelled Incheon. Hit by enemy fire as he was trying to throw a hand grenade and unable to regain a firm grasp of it, Lopez spared his men injury by pulling the grenade under himself, absorbing its full blast.

Officials also have memorialized the Sioux helicopter, which saw service during the Korean War, creating a &#8220;Sioux Circle&#8221; in the area of the 2nd Multi-Functional Aviation Brigade, Taliento said.

In addition, Camp Humphreys will keep in memory the names of installations that USFK has or will shut down as part of its consolidation plan, Frace said.

One example is Camp Edwards, which closed last year. It was named for Army Sgt. 1st Class Junior D. Edwards, who received the Medal of Honor during the Korean War for his actions near Changbong-ni in January 1951. His name will find a new place of honor at Camp Humphreys when officials eventually name a new fitness complex after him, Frace said.

Under an agreement with the South Korean government, the U.S. military plans to transform Camp Humphreys into its primary installation, spending $5 billion in construction alone. The transformation will see the post triple in size from 1,230 acres to 3,558 acres by 2008 and its population go from more than 11,000 to 45,000. That figure includes troops, civilian workers and family members.

The expansion is just one part of a gradual, peninsula-wide repositioning of U.S. forces into two main hubs, one in Pyeongtaek consisting of Camp Humphreys and Osan Air Base, the other in the Daegu-Busan region in the southeast.