Expanded search for lead-based paint at playgrounds is ordered 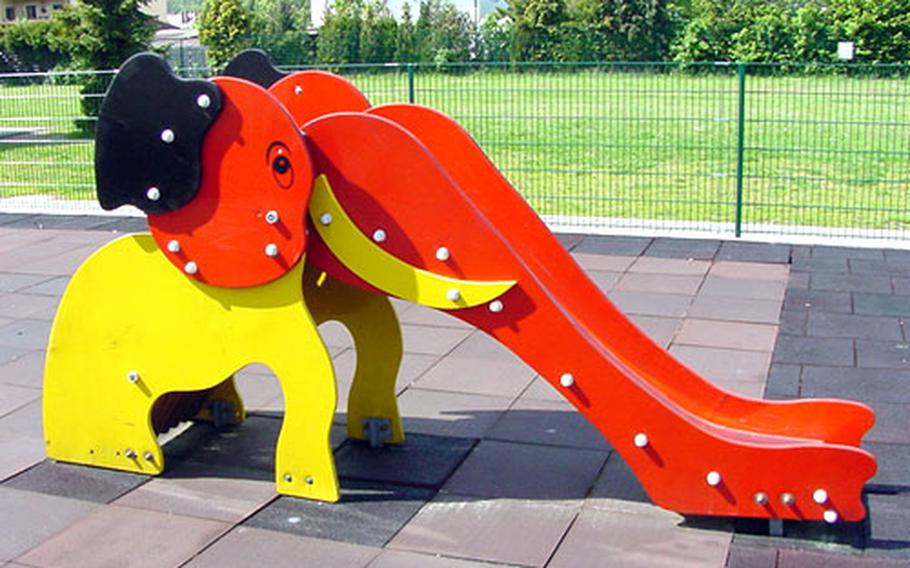 One of the pieces of equipment removed from the Grafenwöhr elementary school playground because it contained lead-based paint. (Courtesy of U.S. Army)

Ten pieces of community and DODDS playground equipment out of 26 samples collected in late May and early June have so far tested positive for the paint at the two posts, said John Svalina, an industrial hygienist for the U.S. Army Center for Health Promotion and Preventive Medicine Europe.

Officials are now warning residents to avoid playground equipment with painted wood parts until the results of a second, more expansive round of testing &#8212; extended to also include Hohenfels this time &#8212; are available in mid-July.

The mother of 9- and 10-year-old girls living adjacent to one of the affected playgrounds was not alarmed at the news.

&#8220;I really wasn&#8217;t that concerned,&#8221; said Michelle Meyering, a Grafenw&#246;hr resident. Meyering&#8217;s daughters were too big to play on the jungle gym that had recently been removed and the lead levels seemed too low to worry about, she said.

Revelations of lead-based paint started surfacing in mid-June, following a routine inspection of Grafenw&#246;hr and Vilseck schools, performed by Svalina in late May.

When three of his first eight samples from the kindergarten testing came back positive for lead (seven were eventually removed), he pursued testing of similar equipment at the bases.

Eleven samples from three community playgrounds in Vilseck turned up three more positives, and four out of seven from testing at Grafenw&#246;hr contained lead, he said.

Base health officials then contacted the manufacturer of most of the equipment, ABC-TEAM, which has playground contracts with military and American customers &#8212; including other DODDS schools &#8212; around Europe, said the firm&#8217;s managing director, Rainer Kronbach.

ABC-TEAM already has removed the 10 lead-contaminated pieces, he said, the first the company has ever had to dismantle for lead contamination.

After the initial findings, 100th ASG officials expanded their search, calling for a round of 80 samples to be collected from the three 100th ASG communities: 55 from community playgrounds and 25 from DODDS facilities, Svalina said.

Results from that testing should be available by the third week of July. Officials may also do some spot testing of equipment on off-post American housing, said Patrick Bennett, acting director of public works for the 100th ASG.

Kronbach said using the paint was legal when the affected playground equipment was installed, even though the oldest was put in no earlier than 1991. Since then, restrictions on lead-based paint use on playgrounds have been tightened, he said, lowered to essentially a no-tolerance level for dry samples.

That generally means that the health risk to children can be mitigated mainly through good hygiene, such as washing children&#8217;s hands, said Mary Brown, Grafenw&#246;hr&#8217;s assistant community health nurse.

So far, the Grafenw&#246;hr medical center has seen no cases of residents with symptoms of lead poisoning, she said. In addition, random screenings of 32 blood tests from the local medical center between 2000-2004 turned up no alarming levels of lead.