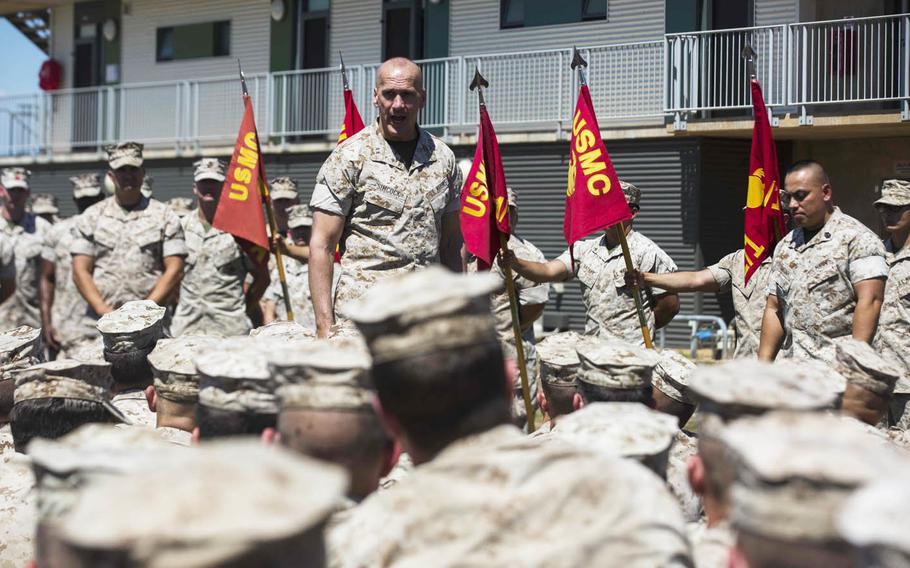 The U.S. and Australia have pushed back plans for the deployment of a 2,500-strong Marine Air Ground Task Force to Australia’s Northern Territory until 2020 as they nail down the final details, including cost-sharing, Australian officials say.

The Marine Corps started building its presence in the port of Darwin in 2012 and grew its rotational force, which spends six months of the year training there, to just under 1,200 troops by 2014.

However, the growth of the force, which was to have included the task force within five years, has stalled with U.S. and Australian officials reporting only 1,250 Marines there this summer.

Australian Defence Force officials said in an email that they would work toward rotations of 2,500 Marines and equipment to Darwin by around 2020.

“The US and Australia are working together to determine the exact size and composition of the 2017 rotation,” the officials said.

Negotiations about cost-sharing are a factor in the revised timetable for the build-up, which is seen as a hedge against growing Chinese influence in the Western Pacific.

Australian Defence Force officials said in an email Monday that the two allies are working toward “finalizing cost-sharing arrangements.”

“This is a 25-year agreement, so it is important for both countries to ensure that arrangements, including for cost-sharing, are well considered,” the officials said.

Australian national security consultant Ross Babbage said the two countries have been negotiating for three years over who would pay costs associated with the rotational force.

The Australian government is spending money on a range of other defense projects that include upgrading air bases in the Northern Territory to accommodate large aircraft, including visiting U.S. planes, he said.

Pacific Marines spokesman Chuck Little said in an email that many factors are at play in planning for the Darwin rotations, including cost, billeting space, unit and airframe availability, logistical support requirements, community impact and training area availability.

So far, concrete efforts to accommodate more Marines Down Under appear limited.

Marine Rotational Force–Darwin operations officer Maj. Justin Sharp, 33, of Wabton, Wash., said in a phone interview last week that the facilities for the Marines in Darwin are about the same as last year with no new construction.

“There is no space on RAAF Darwin and Robertson Barracks (the facilities where Marines stay in Darwin) to facilitate that kind of growth (up to 2,500 Marines),” he said.

The force deployed this year doesn’t have the array of weapons and Marines that a full-sized MAGTF would have, Sharp said, with only four UH-1Y Super Huey helicopters deployed out of Hawaii, he said.

The Hueys were deployed after the Marine Corps pulled its larger CH-53E Super Stallion helicopters from the mission following a Jan. 14 crash in Hawaii that killed 12 servicemembers, according to the Honolulu Star-Advertiser.

Sharp said a full MAGTF would normally have two or three types of helicopters as well as fixed-wing aircraft, artillery and armor, all of which is lacking in this year’s rotation.

“We are a long ways off from those capabilities just in terms of space and the ability to source those from around the Marine Corps. Marines are forward deployed all over the world. Finding and allocating those birds is a difficult piece to manage,” Sharp said.

Despite the uncertainty over the mission’s future, the Marines in Darwin have plenty of training lined up over summer.

Five hundred and eighty of them will act as a maneuver element for the Australian Army’s Darwin-based 1st Brigade in two exercises — Predator Strike and Hamel at the Cultana Training Area near Adelaide from late May until early July Sharp said.

Marines will also participate in the Exercise Koolendong - a live-fire event that will include 150 members of the 4th Marine Regiment out of Okinawa as well as Australian artillery and aviation units, he said.