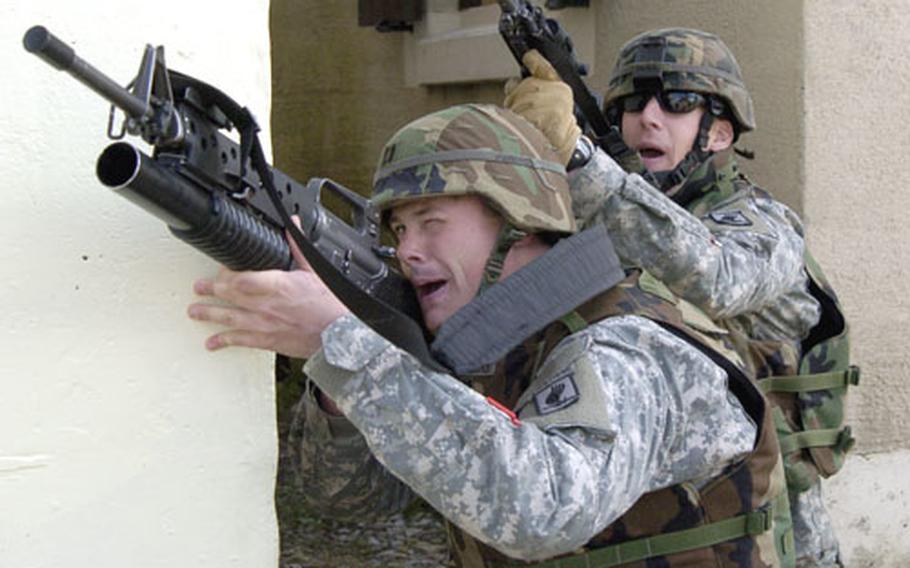 HOHENFELS, Germany &#8212; The revamped 173rd Airborne Brigade has kicked off a major training exercise here, weeks after completing a transformation that saw the brigade more than double in size.

The first 173rd unit to arrive at Hohenfels this month was 1st Battalion, 91st Cavalry Regiment &#8212; which was officially incorporated into the brigade along with new special troops and artillery battalions on Sept. 15.

On Wednesday, 95 leaders from all six 173rd battalions, which include two infantry units and a support battalion, practiced urban operations at Hohenfels.

Standing in an artificial town used for the urban training, 173rd commander Col. Charles A. Preysler said it was a chance for the brigade&#8217;s widely dispersed leaders to get to know each other.

&#8220;Four of our battalions live and do most of their training in Bamberg and Schweinfurt, Germany, and two live and train mostly in Vicenza, Italy,&#8221; he said.

It was the first major training exercise for the brigade since the transformation, Preysler said.

&#8220;We are starting with the leadership so they will know what the tone and the SOPs (standard operating procedures) will be,&#8221; he said.

Nearby, the 173rd leaders &#8212; mostly company commanders and first sergeants &#8212; had formed six squads and were busy conducting mock patrols or raiding buildings to kill or capture colleagues acting as insurgents.

Company B, 1st Battalion, 503rd Infantry Regiment commander Capt. Tom Bostick, 36, of Lano, Texas, said the training was a chance for infantry soldiers to pass on skills to support soldiers.

&#8220;This morning we are learning urban operations &#8212; how to enter and clear a room, walk through an urban environment or get from the woodline to a building,&#8221; he said.

Basics of urban operations include making sure you have security and not walking into kill zones, which are the middle of the street and intersections. Soldiers should be prepared to react to contact, seek cover, suppress the enemy, maneuver, break contact or call for support, he said.

&#8220;When you are walking downtown, even back in the U.S., you can picture you are in an urban environment in Iraq or Afghanistan. If you make contact what would you do? Where are the danger areas? Where would the enemy shoot me from? How would I avoid being killed by the enemy?&#8221; Bostick said.

It was a good chance to learn more about what the infantry does, she said.

Units from the 173rd will rotate to Hohenfels and other training areas in Germany to conduct live- and blank-fire training in coming weeks, Preysler said.

This month&#8217;s training focuses on basic skills such as marksmanship, leading up to squad live-fire training later in the month. The brigade will progress to more complex training and will be fully trained by next June, he said.