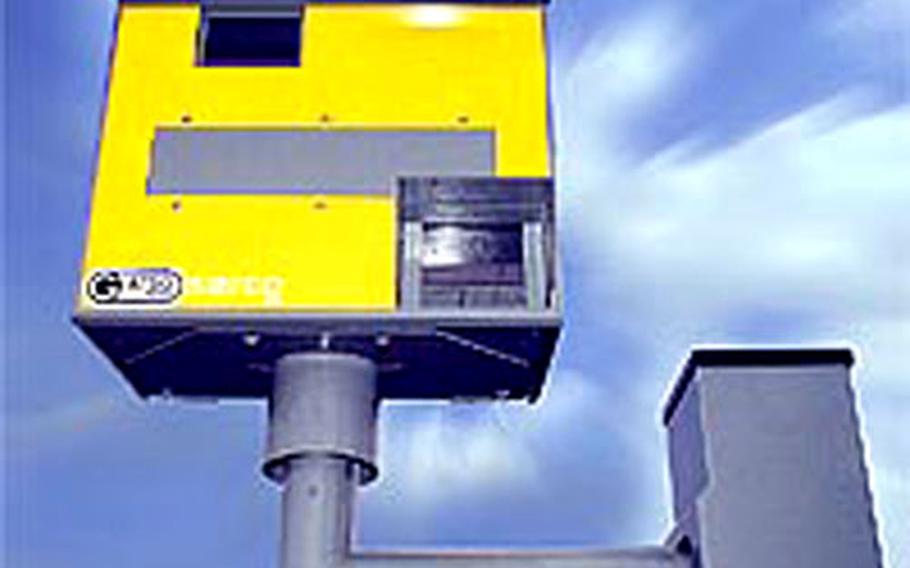 A fixed safety camera waits for its next victim. Thousands of safety cameras are emplaced throughout the UK to ensure safer roads by checking speeders. (Courtesy photo)

SAFETY CAMERAS.You&#8217;re driving on a British road without a worry on your mind when all of sudden a flashing light grabs your attention in the rearview mirror and leaves you bewildered.

Placed along many roads in the United Kingdom, safety cameras are meant to ensure safer roads, not annoy or penalize motorists, although they often do.

There are two categories of safety cameras used to target certain locations &#8212; fixed and mobile. Fixed cameras are housed inside brightly colored boxes on top of posts, while mobile cameras are inside vans parked on roadsides or overpasses.

Many of these cameras are capable of measuring speed in both directions of traffic. A fixed camera can obtain proof of excessive speed in a split second with its radar and photography technology. A mobile camera uses a laser and videotapes the offense.

So, a safety camera caught you red-handed. What now?

Offenders will probably receive a notice in the mail. According to Suffolk&#8217;s SafeCam Web site, most cases can be resolved with a 60-pound penalty and three points added to a British license.

For U.S.-issued driving licenses, there is no point system in place, Terry Marsh, a project manager for the Suffolk Safety Camera Partnership, said.

Americans may not be off the hook, though. The records of repeat offenders could be sent to the appropriate officials, Marsh said.

Drivers who go 20 mph over a posted limit of 30 mph, and those who go 26 mph over any other posted limit will be referred to court, according to the SafeCam Web site.

Got a question about something you&#8217;ve seen or heard around the United Kingdom? E-mail us at: uknews@mail.estripes.osd.mil.