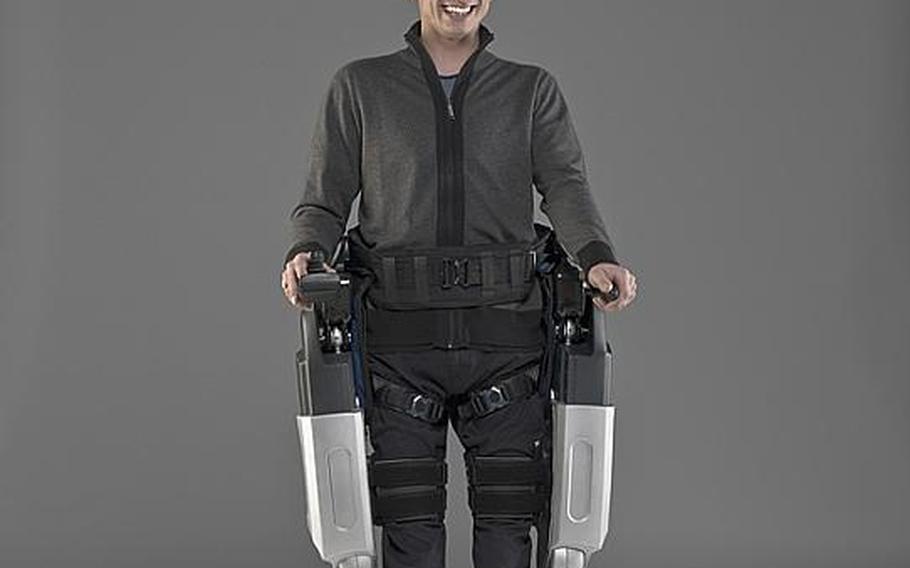 An employee of Rex Bionics of New Zealand demonstrates how to use the company&#39;s exoskeleton, called Rex. Veterans Affairs doctors and others say that type of device could be useful for soldiers who have suffered spinal cord damage. It allows people who use wheelchairs to stand, walk, and climb the stairs. (Photo courtesy of Rex Bionics)

GRAFENW&Ouml;HR, Germany &mdash; A newly developed robotic exoskeleton that enables paraplegics to stand could help troops injured in Iraq and Afghanistan, according to a Department of Veterans Affairs doctor who treats veterans with spinal cord injuries.

Using a joystick to control the exoskeleton, called Rex, users can stand, walk and climb stairs.

The device&rsquo;s developer, Rex Bionics of New Zealand, has been in contact with the VA, said Sophia Chun, who practices spinal injury medicine at the VA Long Beach Healthcare System in California. Chun says she would like to test the exoskeleton on some of her patients.

&ldquo;Rex is the only exoskeleton that I know with the ability to take a person with paralysis from a sitting position to a standing position without another person assisting,&rdquo; Chun said. &ldquo;It could benefit a larger population than the other exoskeletons out there which require a person to have some motor control.&rdquo;

The Rex exoskeleton weighs about 85 pounds and runs for two hours on a charge of its lithium-ion batteries, according to Richard Little, an engineer who helped design and build the device, which reportedly comes with a $150,000 price tag.

A key innovation in the exoskeleton is the joystick controller, Little said, adding that other robotic exoskeletons are controlled by body movements or neural impulses and require users to have some movement in their limbs.

Hayden Allen, a Rex Bionics employee who was paralyzed from the chest down after a motorcycle accident, said he uses the exoskeleton to move around the workshop where he builds more of the devices.

&ldquo;It gives me a bit more of a birds&rsquo; eye view. I can see where the dials are on some of the lathes,&rdquo; he said, adding that the exoskeleton is also useful in the kitchen, allowing him to safely reach a kettle of hot water that was dangerous to grasp from his wheelchair.

Allen said he&rsquo;d recommend the exoskeleton to injured veterans who are highly motivated. &ldquo;For someone who wants to get out there and do things this would be perfect,&rdquo; he said.

For example, the exoskeleton would help such people maintain muscle tone and bone density. It also would also help prevent people getting kidney stones and stop pressure sores, he said.

&ldquo;In the short term it has a huge effect on their self image, their self esteem and their ability to take part in ordinary daily activities,&rdquo; he said.

Chun estimated that 30 to 40 percent of such veterans might benefit from the exoskeleton.

Rex Bionics is one of several companies developing robotic exoskeletons, although others in the works are being designed for able-bodied troops.

Using mechanical hydraulics, computer electronics and other systems, Lockheed&rsquo;s battery-powered &ldquo;exoskeleton&rdquo; is designed to help soldiers carry hundreds of pounds of weapons, equipment and other gear in combat as if it were just a fraction of its actual weight, according to the report.

The Raytheon Sarcos team &mdash; a subsidiary of defense giant Raytheon Co. &mdash; also has a contract with the Army to develop the exoskeleton system, the report said.

Information about the Rex exoskeleton is available at: http://www.rexbionics.co.nz/.

To see the Rex exoskeleton in action, go to: http://www.youtube.com/watch?v=EGw5DYngHTo.