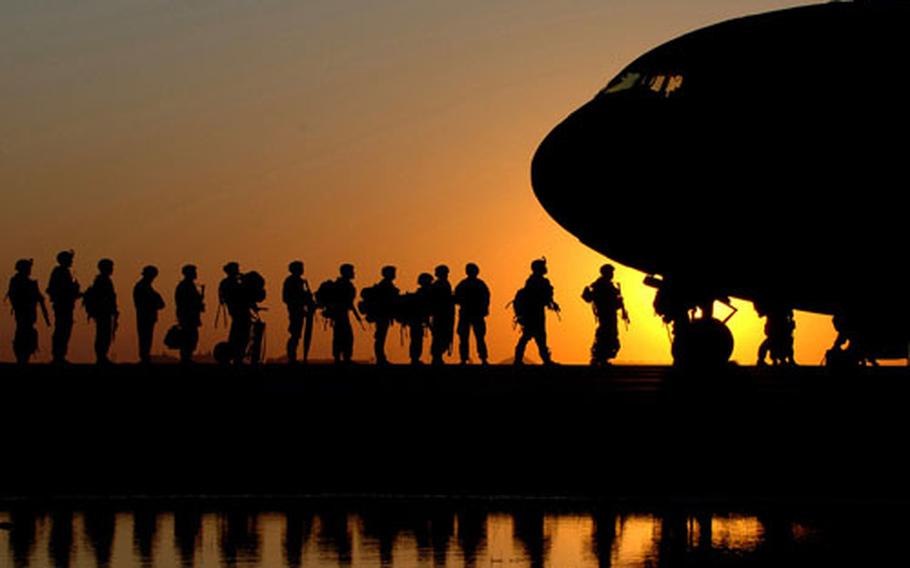 The sun sets behind a C-17 Globemaster III as Soldiers wait in line to board the aircraft taking them back to the United States Nov. 17 at Joint Base Balad, Iraq. (Erik Gudmundson / U.S. Air Force)

As the endgame of the U.S. involvement in Iraq develops, some plans are in place but there are several practical questions that remain unanswered.

Under the withdrawal plan announced by President Barack Obama in late February, some 35,000 to 50,000 U.S. troops will remain in Iraq from summer 2010 to the end of 2011. Their mission is supposed to be limited to training Iraqi forces, conducting counter-terrorism operations, and protecting U.S. civilian and military personnel operating in the country.

Some of the previous ideas about a continuing U.S. presence in the region have been changed, officials said.

A senior U.S. officer told Stars and Stripes this week that a plan for an "over the horizon" force in Kuwait is not an option.

"No," he said simply, when asked if that was still on the table.

As for the remaining force after Aug. 31, 2010, "with the exception of counterterrorism operations conducted in close coordination with [the Iraqi government], U.S. forces will cease combat operations," said Lt. Col. Patrick Ryder, a Pentagon spokesman. "[Multi-National Force &#8212; Iraq] will be re-designated as a transition force headquarters that consists of a single headquarters, several advisory and assistance brigades, and appropriate supporting forces."

But on Sunday, Iraq Prime Minister Nouri al-Maliki said no U.S. withdrawals would be allowed by the Iraqis until each area was presumed "completely" secure.

"I do not want any withdrawals except in areas considered 100 percent secure and under control," al-Maliki told The Associated Press. "Any area where there is a likelihood of a resumption of attacks, withdrawals from there will be postponed," he said.

Ryder, in comments made before al-Maliki&#8217;s interview, said, "while the specifics of the drawdown strategy are still in development, we fully intend to implement the withdrawal provisions in the [status of forces agreement] which calls for withdrawal of all U.S. forces by the end of 2011."

Ryder also said that even with the U.S. commitment in Iraq and the addition of U.S. forces to Afghanistan, "there is no indication of any deployment extensions at this time."

The senior U.S. officer said officials were not eyeing a larger presence elsewhere in the region, "other than Afghanistan and modest growth in some security assistance missions in a few countries."

Of course, significant questions remain about how to physically withdraw some 100,000 troops and the tons of equipment they use.

According to the Government Accountability Office, as of November, there were at least 280 U.S. installations of various sizes in Iraq. Dozens have been closed or handed over to the Iraqis, and some 50 more are expected to follow in the coming months.

According to The Associated Press, the military has for two years been "shipping battlefield equipment through Jordan and Kuwait, testing possible exit routes."

A Baltimore Sun report described the situation at one large base &#8212; Anaconda, near Balad. At that base, officials have tallied "1.2 million items of property worth $14 billion, a partial list of material that includes objects such as dentist&#8217;s chairs, chapel pews, swimming pool filtration systems and surveillance blimps."

And another GAO report found that one-third of all the U.S. military&#8217;s steel shipping containers in Iraq and Afghanistan are lost.

Then, of course, there is the prospect of insurgent attacks inflicting losses on U.S. convoys as they exit the country. Whatever the case, officials are expecting bumps in the road.

"There will surely be difficult periods and tactical adjustments," Obama said when announcing his withdrawal plan.

Stars and Stripes reporters Jeff Schogol and Joseph Giordono contributed to this report.