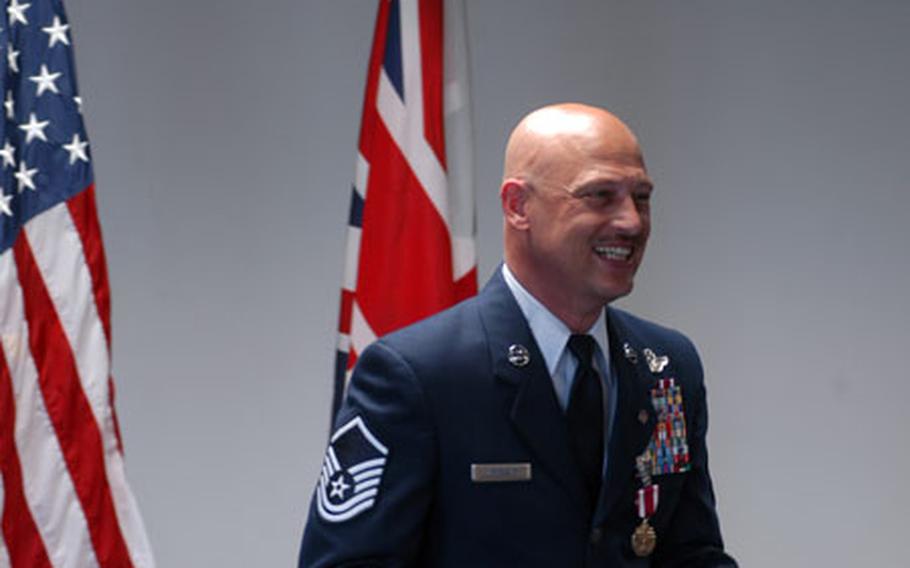 Master Sgt. Michael Linbaum, of the 21st Special Operations Squadron, enjoys a laugh during his address to his comrades at his retirement ceremony last week. (Bryan Mitchell / S&S)

The nearly 26-year Air Force veteran and reported record-holder for the most hours in an Air Force helicopter was honored last Wednesday by his comrades in the 21st Special Operations Squadron for a career that spanned the globe and included a host of life-saving missions.

The squadron &#8212; which flies the MH-53M Pave Low helicopter as part of the 352nd Special Operations Group &#8212; held a retirement ceremony for Linbaum last week in the unit&#8217;s hangar.

Dozens of unit members as well as Linbaum&#8217;s family were on hand to send off one of the Air Force special operations community&#8217;s most experienced aviators.

The 21st commander summed up Linbaum in fewer than 10 words.

Linbaum, affectionately known as &#8220;Eddie&#8221; by his family and friends, began his Air Force journey in 1982 as an evaluator flight engineer with the 40th Aerospace Rescue and Recovery Squadron at Fairchild Air Force Base, Wash.

The 44-year-old Randallstown, Md., native joined special operations in 1989 and has since served in New Mexico, Florida, South Korea and finally the United Kingdom. He retires as the 21st director of resources superintendent after performing as a crew chief on six helicopters.

Despite serving in support of Operations Enduring and Iraqi Freedom and participating in the evacuation of Lebanon last summer, Linbaum cites his service in search and rescue as his most rewarding.

Linbaum plans to take his family on one last grand tour of Europe this summer before they return to the United States. He plans to take some time to fix up the family home before looking for new work.