This room of the new exhibition on the everyday life of U.S. and NATO soldiers at the Point Alpha memorial near Geisa, Germany, focuses on the early years of the Cold War along the frontier of West and East Germany. (Point Alpha Foundation)

This room of the new exhibition on the everyday life of U.S. and NATO soldiers at the Point Alpha memorial near Geisa, Germany, focuses on the early years of the Cold War along the frontier of West and East Germany. (Point Alpha Foundation) 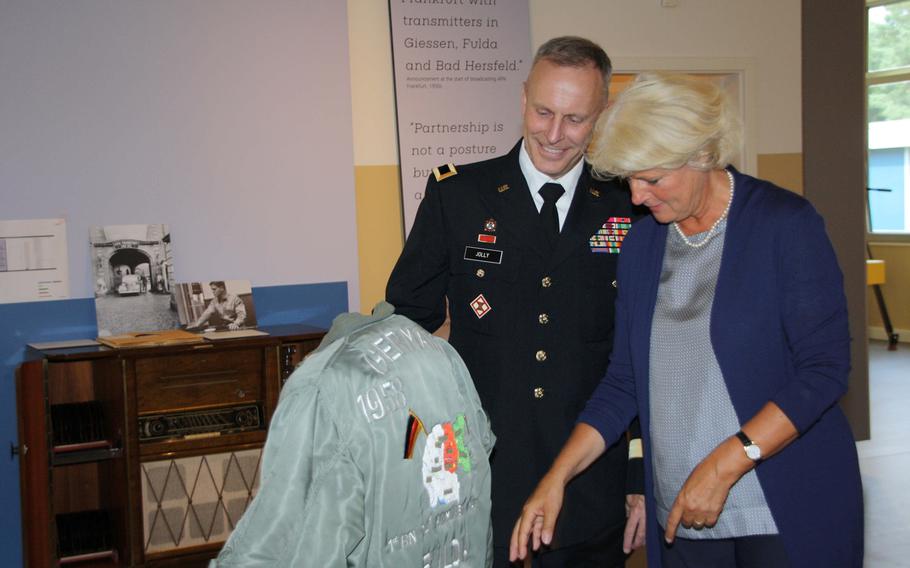 The Fulda Gap, a group of passes through hills about an hour northeast of Frankfurt, was for more than four decades the site one of the world’s most tense and heavily armed border standoffs.

Now, the place known as Point Alpha, where U.S. and NATO forces in West Germany kept watch over what was regarded as the Soviet Union’s most likely route to invade Western Europe, will be the subject of permanent exhibition.

Opening on Sunday at the memorial near Rasdorf, the event celebrates the everyday life of U.S. and German soldiers and civilians. It focuses on the role U.S. soldiers played in bringing American culture to Germany after World War II and the improbable relationships that bloomed here.

“The partnership was based on friendships of the people involved — it was a security partnership, sure, but it was mainly a partnership between people,” said Danny Chahbouni, a German researcher at the Point Alpha memorial.

“So our mission is to bring Germans and Americans together and tell them about how this partnership evolved, how it was affected by the Cold War, and to show people how Americans here lived and about their commitment for the defense of Western Europe.”

The fall of the Berlin Wall in 1989 and collapse of the Soviet Union in 1991 rendered the border between East and West Germany and its many outposts obsolete. Today, Point Alpha is a historical site commemorating those years, when it was widely believed that if a third world war were to occur, it would do so here.

Jo Ator, a U.S. veteran who currently lives in Frankfurt, briefly served a rotational deployment in West Germany in 1986, when she visited the still-functioning observation post at Point Alpha.

“You wouldn’t think about it much elsewhere, but Germany had this wall,” she said. “You could see where people trying to escape East Germany died, and there’s the barbed wire, and the guard towers and everything and you think, oh man, this is the real stuff.”

The exhibition — which features signs in both German and English — will be housed in one of the two major barracks where U.S. soldiers once lived, Chahbouni said, and will feature items such as old American Forces Network microphones, uniforms of U.S. and German soldiers, contemporary comic books, and letters and other original documents from those who served at the post.

“Think about how AFN, Elvis Presley and all the popular American culture influenced Western Europe and especially the Germans,” Chahbouni said. “I think this is still a big issue. We are living a Western lifestyle, a style that was brought to us by the American soldiers that came as enemies and became our friends.”