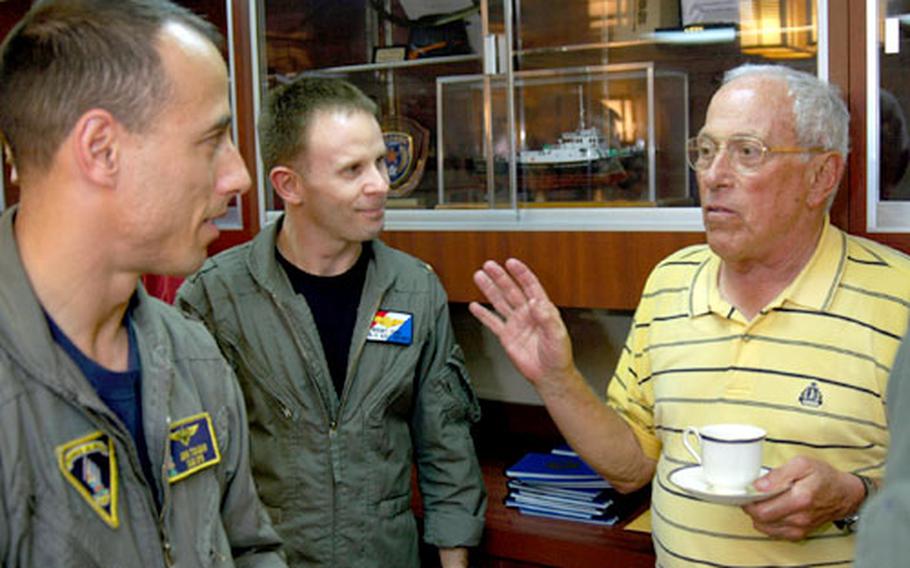 Retired Capt. Everett Southwick talks about the Navy’s old days with the current generation of pilots on board the Kitty Hawk. (Adam York / Courtesy of U.S. Navy)

HARMON, Guam &#8212; Enduring six years in captivity as a prisoner of war after being shot down over Vietnam can do a lot to a person.

For retired Navy Capt. Charles Everett Southwick, the experience gave him a new set of lenses with which to view life over the more than 30 years since his release from the infamous &#8220;Hanoi Hilton&#8221; prison in 1973.

Southwick was the keynote speaker Tuesday at the opening of &#8220;Open Doors: Vietnam POWs Thirty Years Later,&#8221; a traveling exhibit of still photography that can be seen through Aug. 2 at the Guam KAHA Arts and Culture Gallery. Along with the images are touching stories of Southwick and 29 other Vietnam POWs &#8212; their survival, reunion with loved ones and present-day lives.

&#8220;America&#8217;s former prisoners of war are among our greatest heroes,&#8221; said Guam acting Gov. Kaleo Moylan, who also spoke during the opening. &#8220;Under the worst conditions they fought fierce and served with honor, love of country and devotion.&#8221;

Southwick was one of the many who carried on in that spirit after returning home from the war. He went on to pursue a law degree and held many top positions in the Navy as congressional liaison before retiring in 1977.

In civilian life he served as legislative liaison to major corporations, NASA and several state politicians. The father of four and grandfather of four now travels the United States to talk about his POW experiences.

As a young man growing up in the Pacific Northwest, he became fascinated with flying and resigned his Army ROTC commission to join the naval aviation cadet program. Receiving his Navy commission in 1955, Southwick flew jet fighters in West Coast squadrons, making four carrier deployments to the Western Pacific.

In October 1966 he began flying F-4B Phantoms and five months later was assigned to VF-114 aboard the USS Kitty Hawk, then in the Gulf of Tonkin off the coast of Vietnam.

He shot down a MIG-17 in April 1967. On May 14, 1967, he was shot down and captured during a flack suppression mission against a railroad bridge near Hanoi.

He said he prefers not to talk about his experience in captivity, but how he survived it is a question he&#8217;s often asked. His response is that the human spirit can endure almost anything.

&#8220;Let me assure each and everyone of you that when faced with similar challenges you will do just fine,&#8221; Southwick said. &#8220;Take 9/11, for example. There are many tales of heroism in that incident. It demonstrated time and again what circumstances and emergencies bring out in people.&#8221;

He added that he&#8217;s not alone among POWs whose lives were enriched through the suffering they endured.

&#8220;I believe that for the most part the POW experience was a positive influence on our lives after returning home,&#8221; he said. &#8220;Some of us have gone on to be elected to political office, several in the U.S. Congress and state representatives or high government officials, and many have gone on to pursue educational opportunities.&#8221;

&#8220;Open Doors: Vietnam POWs Thirty Years Later&#8221; was created in 2002 by writer Taylor Baldwin Kiland and photographer Jamie Howren Quinn, and is managed by the Coronado (Calif.) Historical Association of Museum and Art.