Exercise tests whether technology can reduce mistaken firing at allies 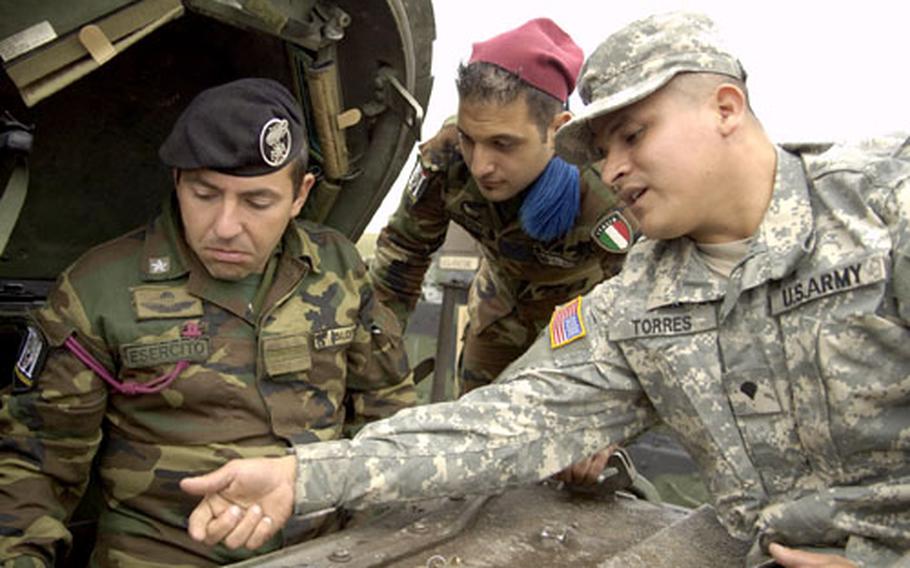 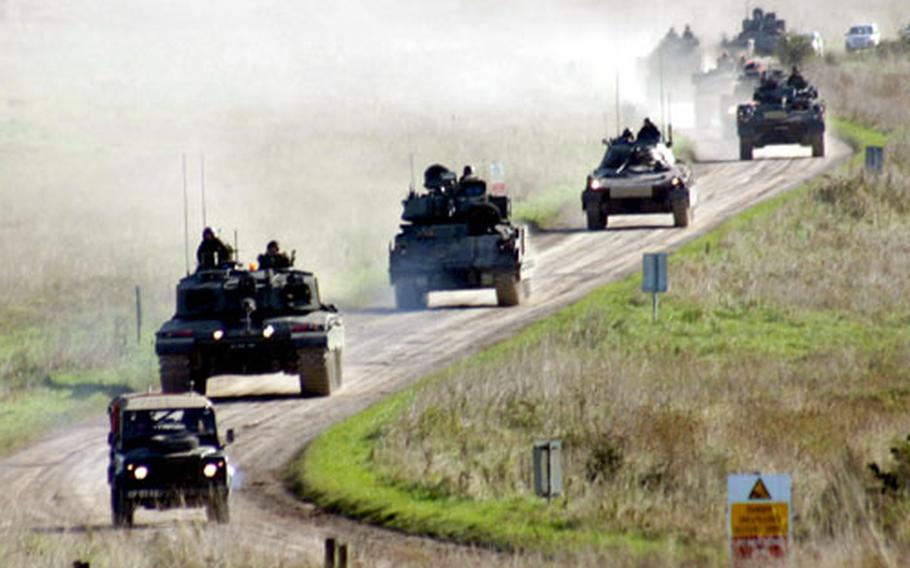 A convoy of armored and unarmored vehicles from the United Kingdom, United States, Italy, Sweden, and France moves toward a battle position during Exercise Urgent Quest. (Marie La Touche / Courtesy of U.S. Army) 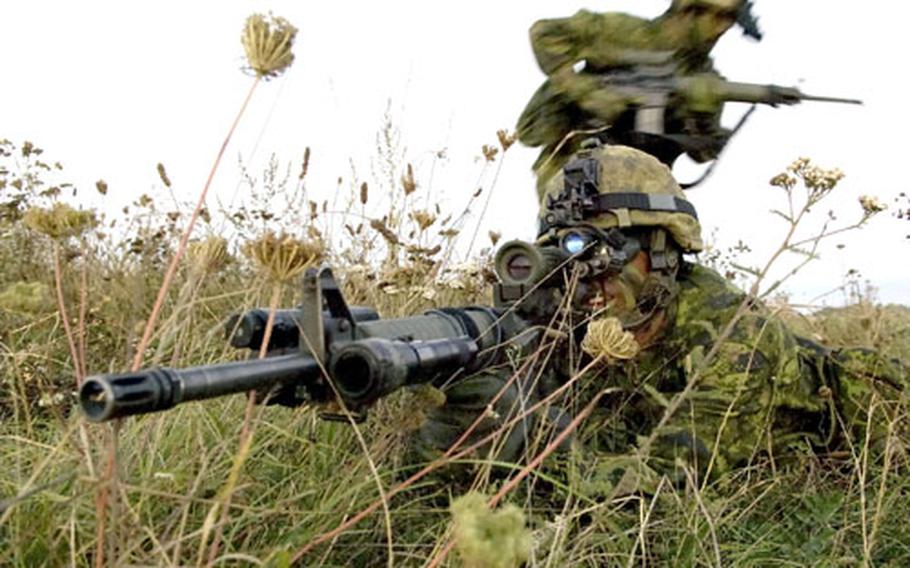 But a recent nine-nation NATO and U.S. Joint Forces Command exercise conducted at England&#8217;s Salisbury Plain Training Area tested technology that could minimize &#8212; if not eliminate &#8212; attacks by friendly troops.

The exercise, called Urgent Quest, included about 1,000 military and civilian personnel, a dozen aircraft and 94 military vehicles. It was designed to test various NATO-standard identification systems from five nations.

Army Lt. Col. Mark Rasins Sr., chief of the ground combat division for JFC&#8217;s Joint Fires Integration and Interoperability Team, which helped run the exercise, said that the exercise is one in a series of steps by the military to field a better identification system.

&#8220;[Military officials] will look at the results my team provides after a rigorous analytical effort is applied to determine if these &#8216;advance technologies&#8217; show enough promise to progress to the next step,&#8221; Rasins wrote in an e-mail.

Urgent Quest was the third and final field test of the various identification systems, using air-to-ground and ground missions, under &#8220;the most realistic and challenging field conditions achievable,&#8221; according to a JFC press release.

The final step will be the fielding of a new system for military forces to identify one another during the chaos of battle.

Friendly fire incidents have always been part of combat operations. In the 1991 Gulf War, nearly one-quarter of the 148 U.S. military personnel killed in battle died at the hand of friendly forces, according to news reports.

Although friendly fire deaths in Operation Enduring Freedom and Operation Iraqi Freedom have been less than during the first Gulf War, at least 25 U.S. troops have been killed by other Americans, mainly by aircraft guns or bombs, according to Department of Defense reports and briefings.

As technology has increased, the battlefield has become more complex, and officers are being forced to make many tough decisions quickly, said Capt. David Spungin, commander of A Troop, 1st Squadron, 1st Cavalry Regiment, in B&#252;dingen, Germany.

&#8220;One of the most difficult decisions can be to shoot or not to shoot. Fratricide prevention technologies will always be a priority due to the severity of an incorrect decision,&#8221; said Spungin, who commanded the U.S. company during the exercise.

One tested system, called the Battlefield Target Identification Device, automatically sends an encrypted message to a prospective target. If the target has a similar system, the message is decrypted and a response is sent back to the aircraft or vehicle, identifying it as friendly.

The system is able to query a ground-to-ground target a little more than three miles away while a ground target can be queried by aircraft as far away as 12 miles.

Another system used on A Troop vehicles was the Radio Based Combat Identification. It is based on the Army&#8217;s current Single Channel Ground and Airborne Radio System &#8212; known as SINCGARS &#8212; and was preferred by A Troop&#8217;s 1st Lt. Trevor Heller. That system also sends out an electronic signal to identify forces.

&#8220;The [identification system] increased our confidence level greatly in ensuring the prevention of fratricide when utilizing indirect fires [such as artillery],&#8221; said the unit&#8217;s fire support team leader.

Heller, like Spungin, is a veteran of combat in Iraq. About 65 percent of the participating military personnel had recent combat experience, according to an Army press release.

&#8220;Clearly, you want to have the opinions of soldiers and Marines who understand what really matters when the bullets are flying,&#8221; said Rasins, an armor officer. &#8220;My assessment team also has a great deal of combat experience both with retired military contractors and active-duty soldiers and Marines.&#8221;

A Troop deployed 87 soldiers, about half its unit, with 13 M3A2 Bradley Armored Fighting Vehicles and three other tracked vehicles for the exercise. They were augmented by four Marine Corps M1A1 Abrams tanks from the 2nd Marine Division&#8217;s 2nd Tank Battalion, based at Camp Lejeune, N.C. A Marine Corps Reserve F/A-18 squadron also participated.

Some recent &#39;friendly fire&#39; incidentsThere have been a number of incidents in which U.S. forces attacked U.S. or coalition forces during Operation Enduring Freedom and Operation Iraqi Freedom. Some are listed below.

Dec. 5, 2001: A B-52 dropped a 2,000-pound bomb on U.S. special forces and Afghan troops who were directing airstrikes against Taliban fighters north of Kandahar, Afghanistan. Three Americans and five Afghan fighters were killed, and 19 Americans were wounded.

March 2, 2002: An AC-130H Spectre gunship attacked a column of U.S. special forces troops and Afghan fighters during Operation Anaconda, resulting in the death of one American and two Afghan fighters. Three other U.S. soldiers and 14 Afghans were wounded in the attack.

April 17, 2002: Pilots in two U.S. F-16s bombed Canadian troops using a firing range near Kandahar after mistakenly believing the fire was directed at their aircraft. Four Canadian soldiers were killed and another eight were injured.

March 23, 2003: During heavy fighting in Nasiriyah, Iraq, 18 Marines were killed in action by enemy fire and an attack by an Air Force A-10 Thunderbolt II. Ten of the 18 were believed to have been killed by the aircraft. That same day, a U.S. Patriot missile shot down a British Tornado aircraft, killing its two-man crew.

March 28, 2003: An A-10 fired on two British armored vehicles, killing one soldier and injuring three.

April 22, 2004: Army Ranger and former NFL player Cpl. Pat Tillman was killed by gunfire from his own unit during a firefight near Khowst, Afghanistan.