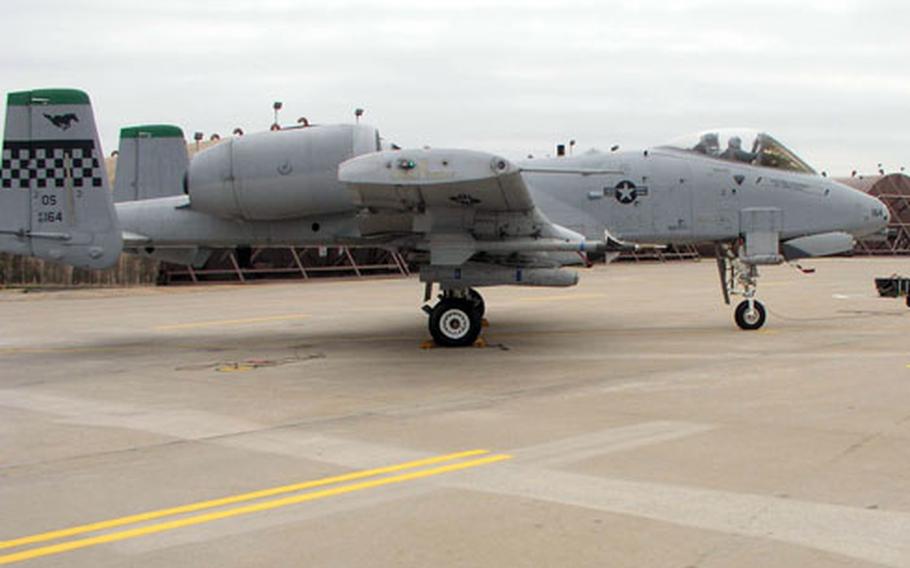 At Osan Air Base in South Korea on Tuesday, with Capt. Eric Hart at the controls, an A-10 Thunderbolt II attack plane readies for takeoff on a mock combat mission. South Korean air force forward air controllers will guide Hart and a fellow-pilot to their targets. Hart is assigned to the 25th Fighter Squadron, part of Osan’s 51st Fighter Wing. The mission was part of a three-day “Buddy Wing” exchange between the wing and pilots of South Korea’s 15th Composite Wing from Seoul Air Base. (Franklin Fisher/Stars and Stripes) OSAN AIR BASE, South Korea &#8212; Under gray skies that later turned mostly sunny, Capt. Eric Hart took off Tuesday afternoon in his A-10 attack jet and flew north on a mock combat mission with another Thunderbolt as flight lead.

As might often be the case in wartime, the forward air controllers who would be guiding them to the day&#8217;s target were two South Korean air force pilots in the cockpit of a green, turboprop-driven KA-1.

The mission was part of a three-day "Buddy Wing" exchange between South Korea&#8217;s 15th Composite Wing at Seoul Air Base and the 51st Fighter Squadron at Osan Air Base.

The exercise affords the two air forces a chance to get valuable exposure to each other&#8217;s tactics, aircraft, procedures and service cultures.

"If we were ever called on to defend Korea, we will work together, combined as a team," said Air Force Col. Mike Newman, commander of Osan&#8217;s 51st Operations Group. "So it&#8217;s very important that we do that on a regular basis so we know each other&#8217;s procedures in advance."

And they get an all-important chance to practice planning and flying combat missions using English, a critical skill when in wartime a simple mispronunciation can create confusion, delay &#8212; or worse.

"To be frank, speaking English is very stressful for Korean pilot to control the aircraft, to lead the perfect, exact target," said the 15th Composite Wing&#8217;s Maj. Park Jwa-ryong, 34. "But we need real training with U.S. military pilot &#8230; If we get wartime, maybe we have to coordinate with U.S. military pilot. So it&#8217;s very good experience for us to prepare."

Park and Capt. Joo Jong-gi, 31, were over the target area waiting for the A-10s to arrive. Their radio call sign was Pointer 1-0.

When Hart, 31, of Osan&#8217;s 25th Fighter Squadron, and his fellow-pilot arrived, Park began guiding them by stages to the correct target, starting by getting their eyes on a large town. Hart&#8217;s call sign was Plasma 1-1.

"Plasma, tally," Hart told Park, responding that he did.

Said Park: "East, two miles from that town, there is a U in the river. Call contact."

Call contact means Hart should find the right spot then tell Park he can see it. He did.

"South, one mile from that river, there are three buildings," Park continued directing the two A-10s. "The color of the roof is orange. These are today&#8217;s your target. Those are command post."

The A-10s saw the targets, said so, and made a successful mock attack.

Hart said that the day&#8217;s radio communication was "actually pretty good." Only a time or two did he have to ask Park to repeat something.

"Which is no big deal," said Hart. "It happens all the time with Americans. You have three radios going on at the same time.

"I&#8217;d never worked with the KA-1s before," he said. "I thought they did a superb job. Hopefully we can work with them a lot more and get more proficient at it."