Exercise offers more than two hots and a cot 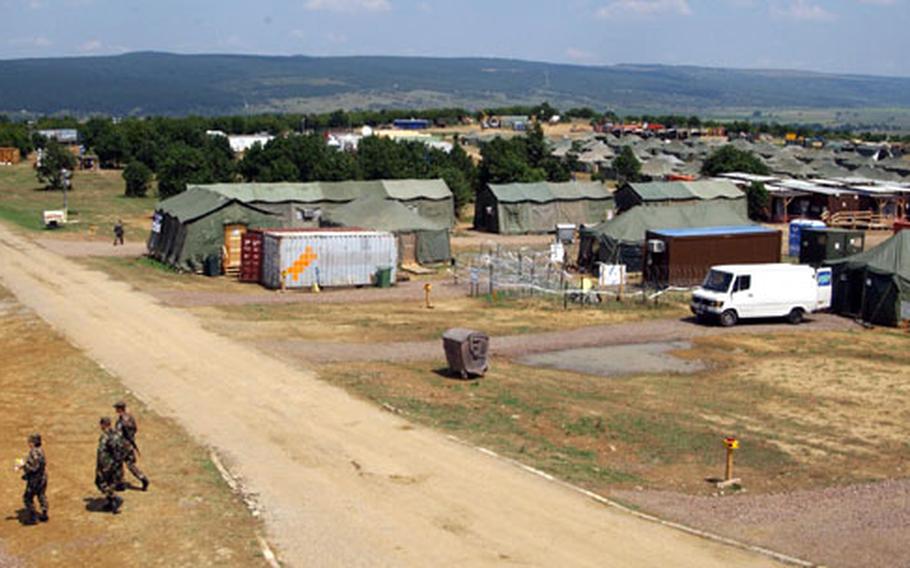 Soldiers walk across part of the Bulwark 04 base camp Saturday at the Novo Selo Training Area, Bulgaria. The 141-tent camp, which took six weeks to construct, is the first combined training exercise in Bulgaria since the country joined NATO in May. (Lisa Horn / S&S)

NOVO SELO TRAINING AREA, Bulgaria &#8212; When troops arrived to set up Bulwark &#8217;04 in May, the scruffy hill where the base camp now sits was not much more than grass and soil.

Soldiers participating in the U.S. Army Europe exercise are from active-duty units based in Germany along with roughly 500 Alabama, Illinois and Germany-based National Guard and Reserve soldiers.

Soldiers are living in 114 tents at the base camp and training in live-fire combat scenarios and using the site&#8217;s Military Operations Urban Terrain course, which simulates a small town.

The 16,000-square foot dining facility is open 24 hours a day, but if dinner doesn&#8217;t satisfy soldiers&#8217; hunger, troops can buy a candy bar before the post exchange closes at 10 p.m., pick up their mail at the remote Army post office or settle finance issues with Mannheim&#39;s 208th Finance Battalion.

Morale, Welfare and Recreation has two tents for watching movies and the American Forces Network and has set up a separate tent for morale calls.

The 160th Forward Surgical Team has set up a tent to handle any medical need just short of brain surgery.

Because of the training site&#8217;s remote location &#8212; the closest hospital is about 45 minutes away &#8212; Bulwark organizers decided that a surgical unit would serve well at the exercise, said Maj. James Davis, construction management officer 18th Engineer Brigade, the exercise&#8217;s commanding unit.

The unit, which deployed to Iraq for a year beginning in March 2003, is used to working in the field and providing care to foreign troops as well, said Dr. (Maj.) Mohamed Haque, general surgeon for the 160th.

Next week, a platoon of Bulgarian troops will train alongside the U.S. soldiers and the 160th will provide care to them just as they did to them and other coalition forces downrange, Haque added.