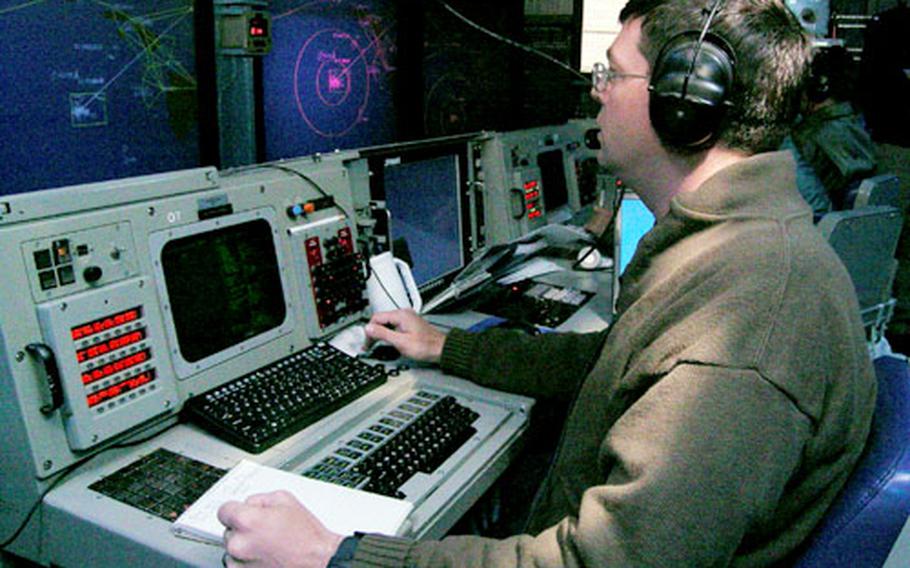 Lt. Brian Connolly is the tactical action officer during a three-day exercise on the USS Chancellorsville in Yokosuka on Thursday. The exercise, Yokosuka’s first international test of the Fleet Synthetic Trainer, involves ships from Australia, San Diego and Japan. (Allison Batdorff / S&S)

Lt. Brian Connolly is the tactical action officer during a three-day exercise on the USS Chancellorsville in Yokosuka on Thursday. The exercise, Yokosuka’s first international test of the Fleet Synthetic Trainer, involves ships from Australia, San Diego and Japan. (Allison Batdorff / S&S) 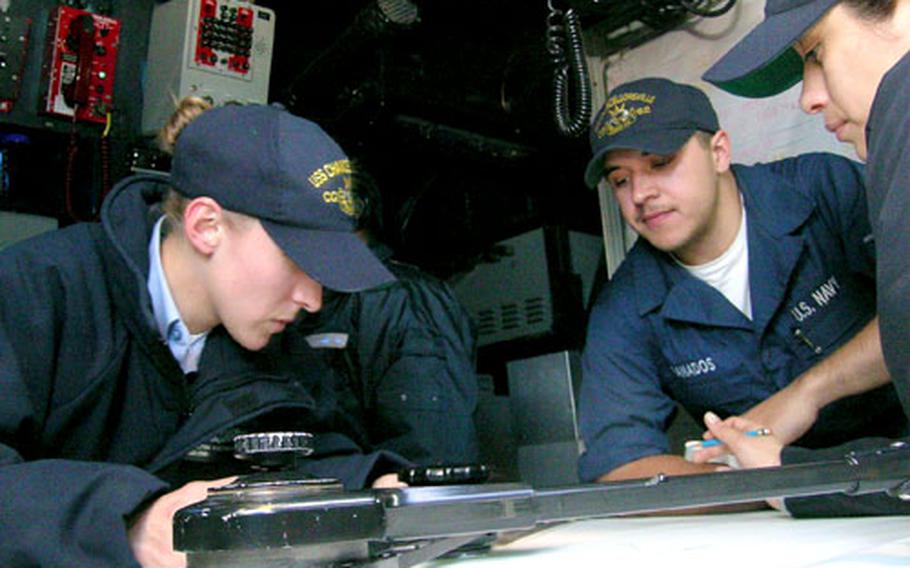 YOKOSUKA NAVAL BASE, Japan &#8212; Distance is no object with a Fleet Synthetic Training. Typhoons or busy schedules aren&#8217;t an issue, either. The planes don&#8217;t even need gas.

And while all five warships are at their respective home ports in Japan, Australia and San Diego this week, the picture in the ships&#8217; Combat Information Center and shore-based battle labs tell a different story.

&#8220;Country Orange and Country Green have an economic and political falling out,&#8221; USS Chancellorsville commanding officer Capt. King Dietrich said Thursday. &#8220;The coalition is there to keep an eye on the amphibious group offshore.&#8221;

The Chancellorsville crew works through the simulation with two Australian ships and two Navy ships from San Diego in a three-day, 300-person event that was to end Friday. It&#8217;s also a milestone as Yokosuka&#8217;s first international test of the FST technology.

The U.S. Navy external interface lets joint and coalition forces simulate at-sea fighting without leaving port. It&#8217;s a collection of routers, switches and servers that network forces on the same virtual battlefield with everyone getting the same virtual picture at the same time.

&#8220;With FST, you don&#8217;t have to drive to each other to work together,&#8221; said Craig Fajardin, director of Tactical Training Group Pacific Detachment Yokosuka. &#8220;You can train together in remote locations and it gets the coalition forces together, which is hard to do.&#8221;

Currently, about half of the 20 or so major ships in the Pacific are FST-enabled. What makes FST different from other ship combat systems is that it&#8217;s external and more experimental, Fajardin said.

Yokosuka started with FST in December 2003. Some commands, such as CTF 70 and CTF 76, made it mandatory for ships to test on FST monthly.

However, the technology doesn&#8217;t take away the importance of getting under way, said Lt. Cmdr. R.D. Stevens, a liaison from San Diego.