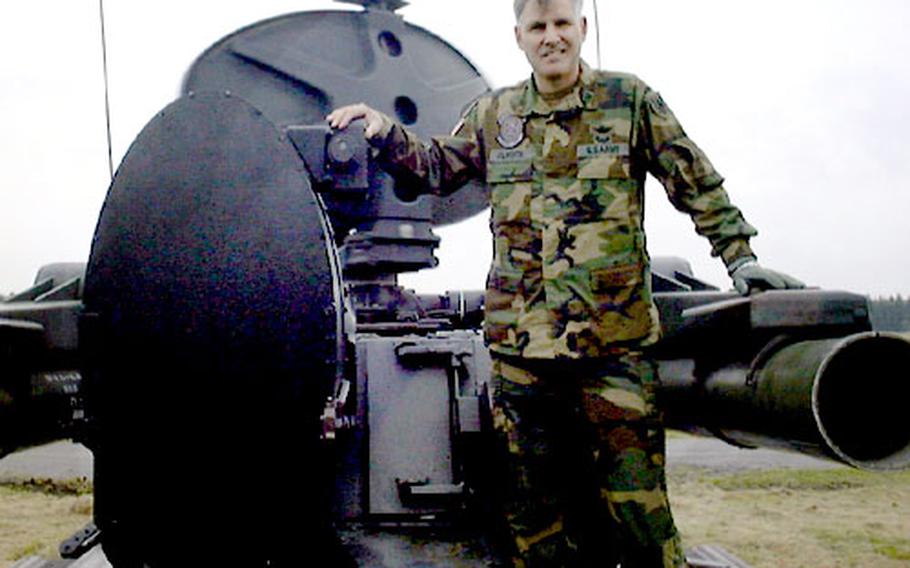 Chief Warrant Officer 5 Warren Aylworth, tactical operations officer for the 11th Aviation Regiment, stands atop a German Roland anti-aircraft battery during the Schwarze Himmel (Black Sky) exercise last year. Aylworth said the Roland also is used by Iraq, and the knowledge his pilots gained will be useful in war. (Courtesy of U.S. Army)

Chief Warrant Officer 5 Warren Aylworth, tactical operations officer for the 11th Aviation Regiment, stands atop a German Roland anti-aircraft battery during the Schwarze Himmel (Black Sky) exercise last year. Aylworth said the Roland also is used by Iraq, and the knowledge his pilots gained will be useful in war. (Courtesy of U.S. Army) 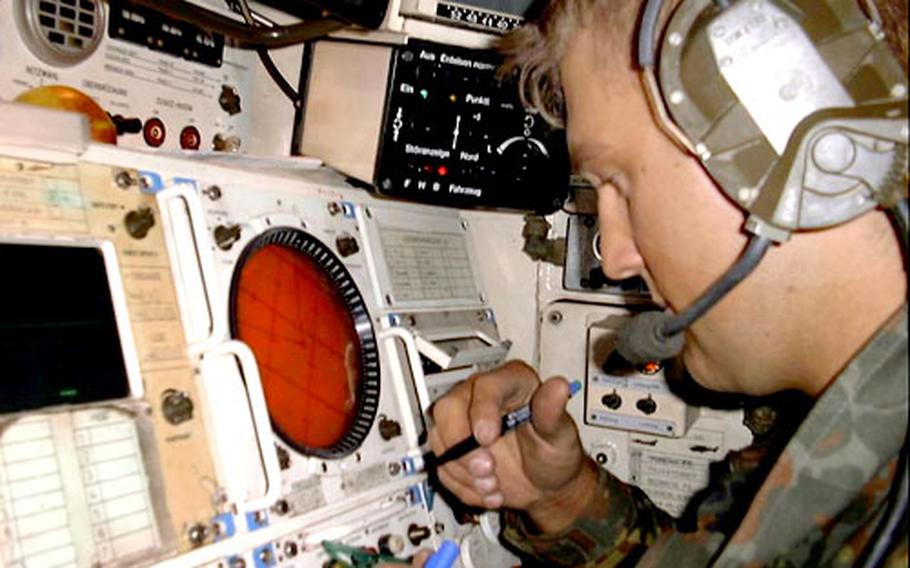 CAMP UDAIRI, Kuwait &#8212; The German government may oppose a U.S. war with Iraq, but the German army has given American pilots invaluable aid in foiling Iraqi air defense.

The Roland was built in the 1980s as a joint French and German venture. It was purchased by the Iraqis and remains among the world&#8217;s finest air-defense artillery systems, Aylworth said.

The invitation to join in Schwarze Himmel came in 2001, he said, long before the United States had any serious plan to attack Iraq. The Germans were looking for aircraft to simulate an attack on its Roland batteries.

Aylworth said the regiment was busy at the time, with one of its two squadrons at Fort Hood, Texas, being retrained to use the new AH-64D Longbow model Apache.

Because of the restrictions placed on helicopter exercises in Germany, it took many months to get German government approval.

Aylworth said the Army had plenty of classified knowledge about the Roland, but something was missing.

The exercise took place in the skies south and west of W&#252;rzburg, Aylworth said, and he thought the Apaches did extraordinarily well.

He sat with a Bundeswehr gunner in a Roland battery for an entire night without seeing any blips on the radar screen. At first, he said, he grew irritated because he thought the Apaches had not challenged the system.

Only the next day did he learn that several Apaches had flown directly over the battery without being detected.

Chief Warrant Officer 3 Tim McCray, 34, was one of the pilots who stared down the Roland.

McCray said the pilots know ways to fly and stay out of the radar&#8217;s sights.

They also realized they could spot the radar as soon as the enemy turned it on, which would allow Air Force fighters to instantly destroy it with their missiles.

Aylworth said at the time of Schwarze Himmel, the Army wasn&#8217;t thinking specifically of Iraq when it looked at the Roland. Later last summer, though, when it became apparent 11th Aviation might be part of a second Middle East war, he returned for a closer look with the full cooperation of the Bundeswehr &#8212; even as German Prime Minister Gerhard Schroeder campaigned for re-election on a platform of steadfast opposition to war with Iraq.

The Germans aren&#8217;t the only allies who have helped the Army learn about air defense artillery that will be arrayed against Apache attack pilots in Iraq.

Aylworth, who had flown against the batteries as a pilot, got a chance to look inside them.

Aylworth said that during the more than a month of war preparations in Kuwait, he has personally briefed every Apache pilot who will be involved in the attack on his newfound knowledge of the capabilities and drawbacks of the Roland and the SAM 8.