Exercise gets troops rolling across the river 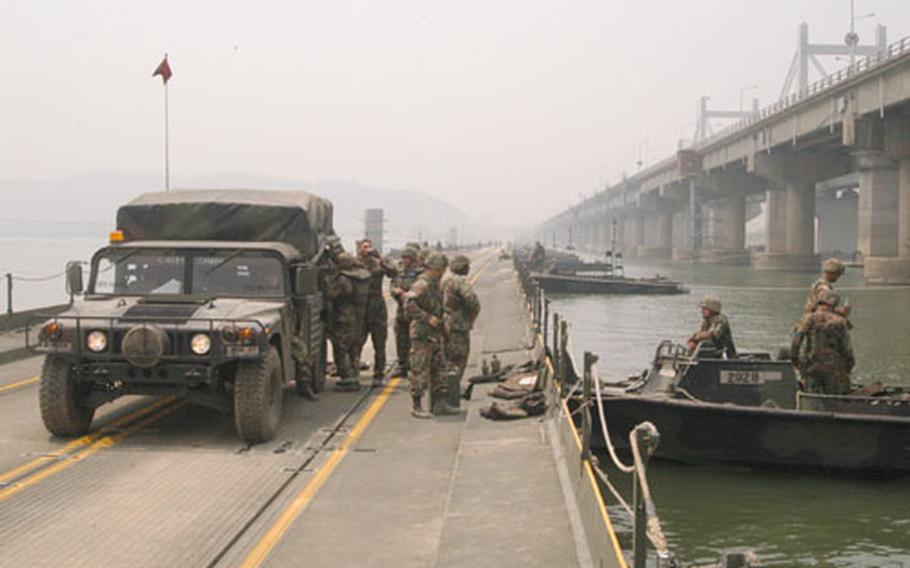 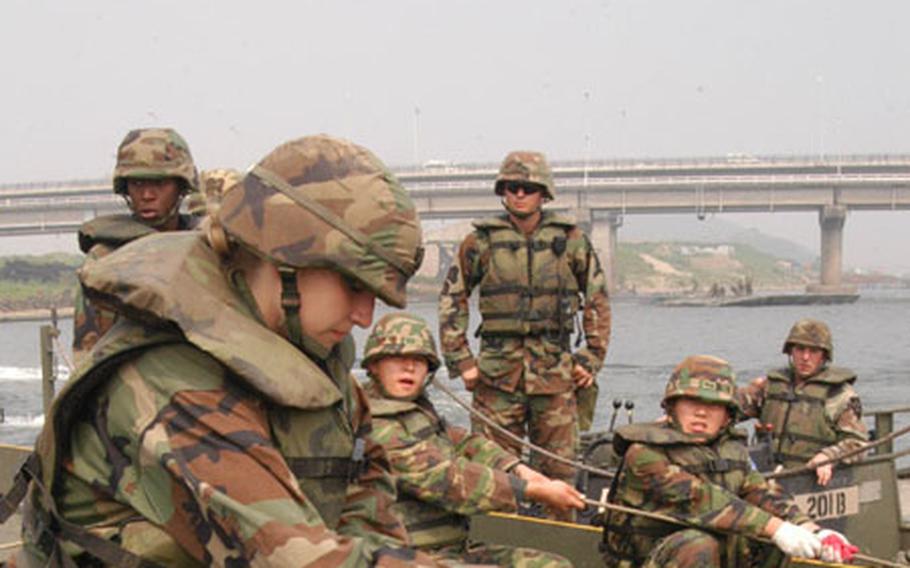 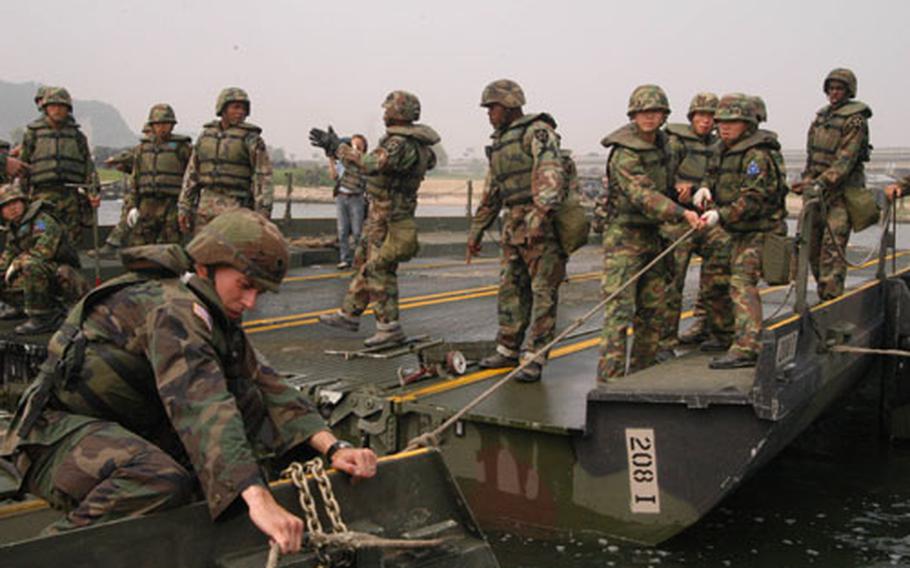 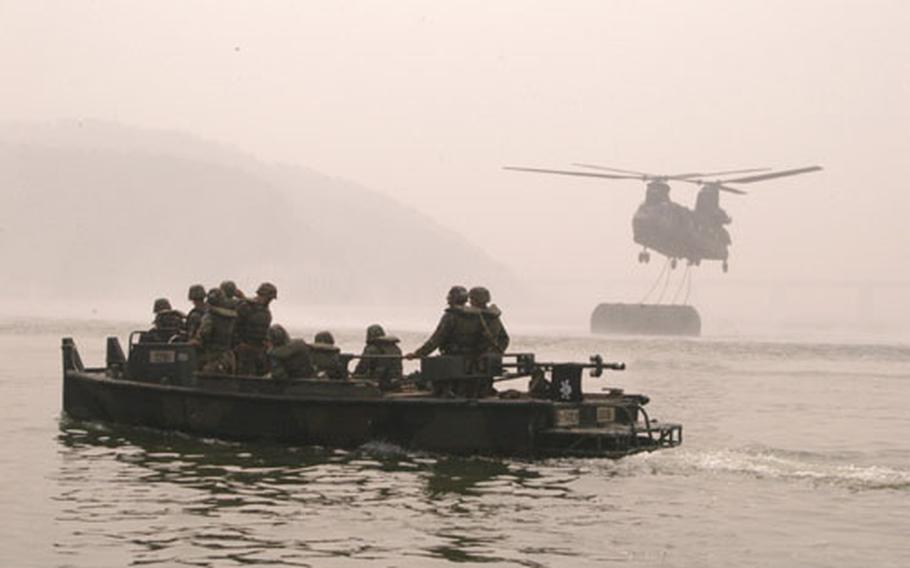 Members of the 50th Engineer Co. wait for a Chinook helicopter to release a section of a floating bridge they assembled on the Han River during training Wednesday. (Seth Robson / S&S)

SEOUL &#8212; U.S. soldiers are giving their South Korean counterparts a lesson in airlift bridge construction during a combined operation on the Han River this week.

The 2nd Infantry Division&#8217;s 50th Engineer Company out of Camp LaGuardia gathered with its equipment on the banks of the river, upstream of the Haeng-Ju Bridge, on Wednesday, joined by the Republic of Korea Army&#8217;s 3-11th Bridge Engineer Battalion.

The South Koreans had the older &#8220;standard&#8221; ribbon bridge, which the U.S. Army replaced with the newer system here six months ago.

Chinook helicopters from the 2nd ID&#8217;s 58th Aviation Battalion dropped the 14,000-pound bridge sections in the middle of the river, one by one.

The Chinooks were almost obscured by dust as they lifted their cargo and zoomed out over the river. When they reached the drop zones, their rotors sent spray flying into the faces of waiting boat crews before the helicopters released the bays and returned to shore for more.

Sgt. Alin Mesidor, who helped supervise the operation, said the bays normally would be launched from a riverbank.

Mesidor said his unit could assemble a six-section raft in 14 minutes from shore or 20 minutes during an airlift operation. Each raft can carry a Bradley Fighting Vehicle across the river.

South Korean and U.S. boat and bridge building crews worked together to collect the bays. U.S. boats were identified by the black skull-and-crossbones flags of the 50th, which is nicknamed the &#8220;Pirates of the Imjin&#8221; (River) and claims to allow the 2nd ID to &#8220;walk on water.&#8221;

Each time a bay was dropped, a boat crew would race over to it. A soldier would jump onto the front of his vessel and release a pair of slings, which keep the bays folded up during the airlift. The bay then would spring open and crewmembers would jump aboard to lock it into place and tie it to their boat.

Before he came to South Korea eight months ago, the only vessel Pfc. Travis Collier had taken onto the water was his surfboard back in San Diego. During the Han River operation he piloted one of the work boats, scooting out to retrieve several bays after the Chinooks dropped them.

Collier said a common problem with the bays occurs when the slings will not release.

&#8220;In combat we would just cut the slings and assemble the bridge. But here we try to save our equipment, so we just push them to shore,&#8221; he said, pushing a jammed bay toward the riverbank with the front of his boat.

When the bay reached shore, Collier&#8217;s boat and another pushed it from opposite sides to ease the tension on the sling so it could be released. The work boats looked as if they were playing a game of bumper cars as they pushed bays around the river.

Despite how it might have looked, Collier said boat crews have to be careful with the equipment.

The bays were brought together in rafts supported by &#8220;hold&#8221; boats where build crews waited to join them together. Some of the rafts included both South Korean and U.S. bays. The newer U.S. bays have a wider roadway than the older South Korean bays, but the equipment is interchangeable.

West Point Cadet Katie Fidler, a member of one of the build crews during her summer training cycle from the academy, said she was involved in all aspects of the operation.

&#8220;I have never seen any of this equipment at West Point. There are only four bridge companies in the Army,&#8221; she said after turning a large tool to link a pair of bays.

&#8220;The Han is nice because it is a fairly peaceful tidal system and it is an excellent training area.&#8221;