Exercise gets 'em ready for the cold 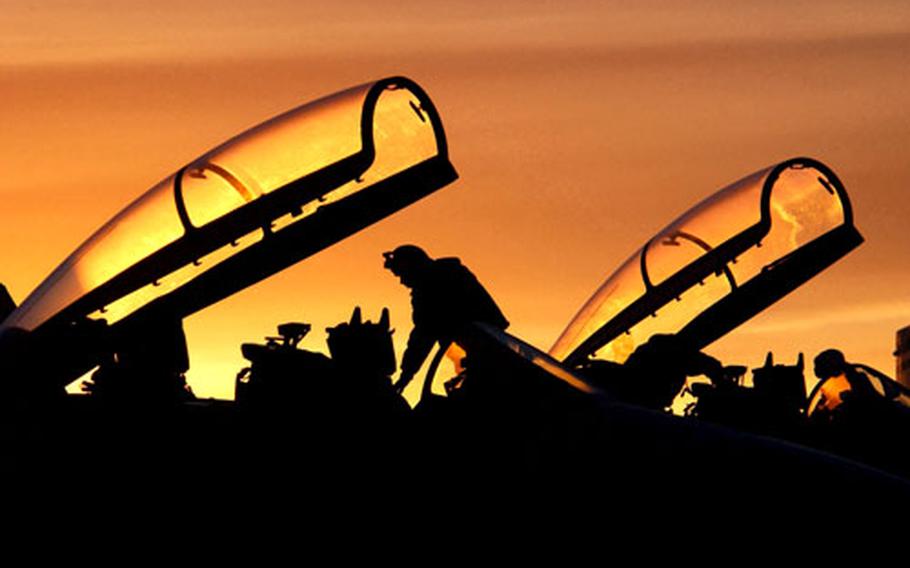 A maintenance worker from Navy Fighter Squadron 31 works on the cockpit of an F-14 Tomcat between flight operations aboard the USS John C. Stennis. The aircraft carrier and its embarked Carrier Air Wing 14 were off the coast of Alaska participating in Northern Edge ’04, a massive joint training exercise involving thousands of U.S. servicemembers from all branches of the military. (Jayme Pastoric / Courtesy of USMC)

A maintenance worker from Navy Fighter Squadron 31 works on the cockpit of an F-14 Tomcat between flight operations aboard the USS John C. Stennis. The aircraft carrier and its embarked Carrier Air Wing 14 were off the coast of Alaska participating in Northern Edge ’04, a massive joint training exercise involving thousands of U.S. servicemembers from all branches of the military. (Jayme Pastoric / Courtesy of USMC) 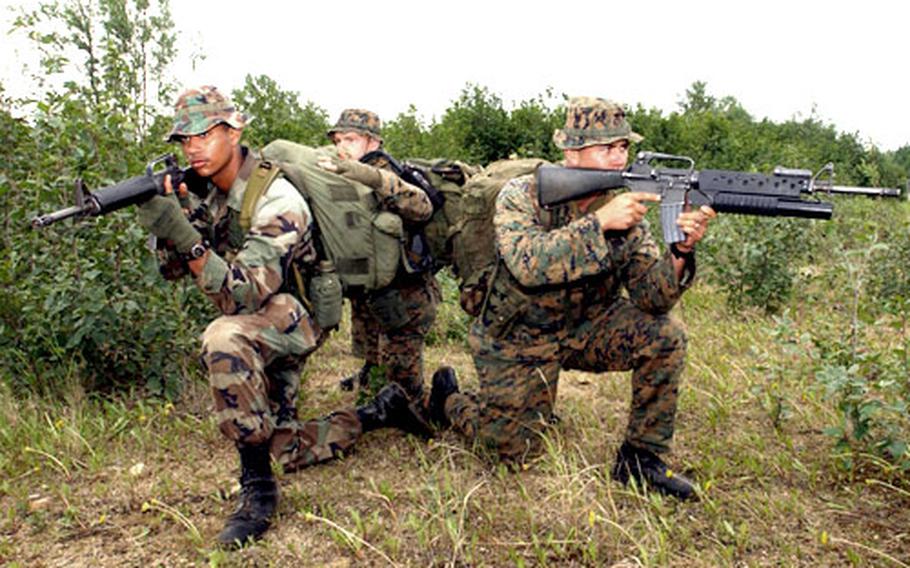 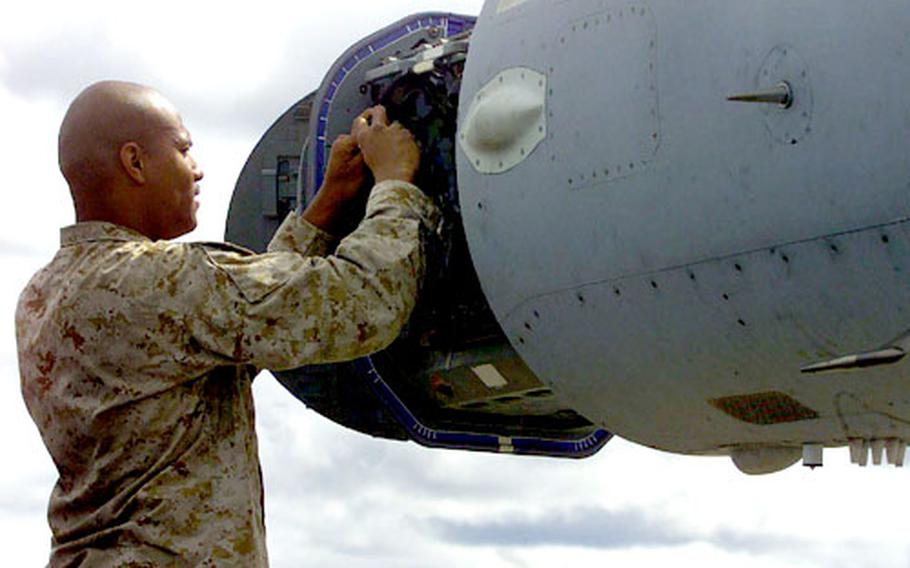 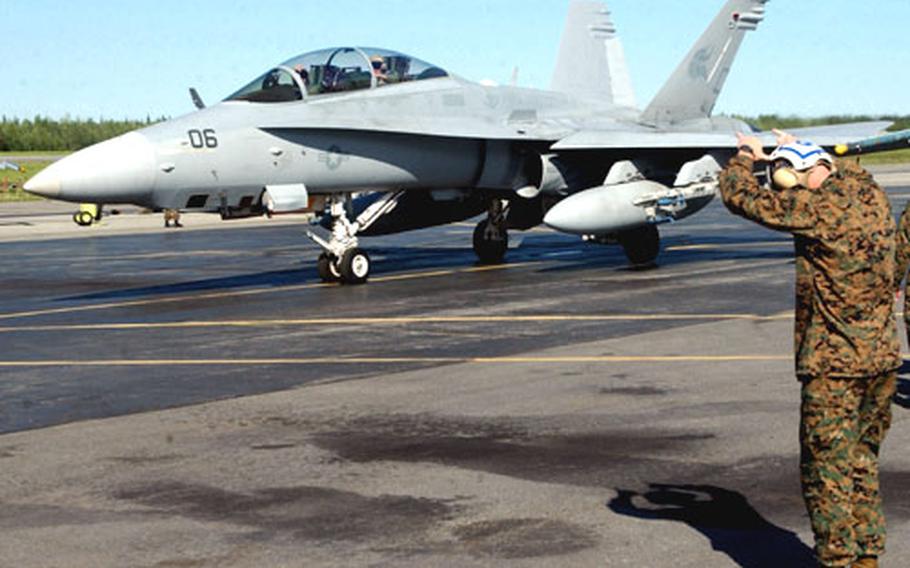 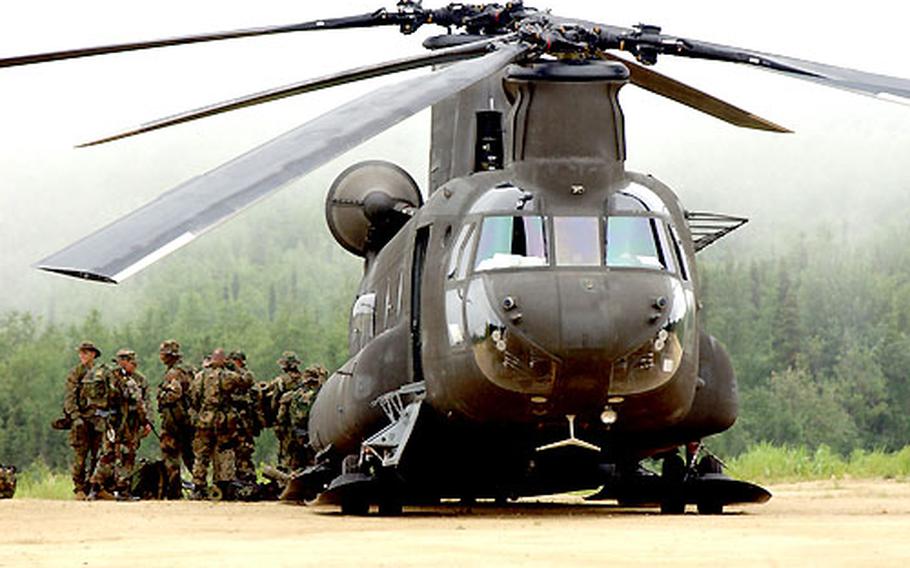 From an Air Force dining hall and the Elmendorf Air Force Base flight line to the frigid forests of the Alaskan wilderness, Marines are making their presence known at this year&#8217;s Northern Edge exercise.

For many of the 9,000 personnel from all services &#8212; including the 1st Marine Air Wing based on Okinawa, Marine All-Weather Fighter Attack Squadron 225 from Iwakuni, Japan, and 3rd Marine Regiment from Hawaii &#8212; the 10-day exercise offers the first chance to train in a much colder climate.

&#8220;Several of us trained at the Air Force Survival, Evasion, Resistance, Escape School at Fairchild Air Force Base in Washington,&#8221; Cpl. Jeff Lazar told public affairs officials covering the exercise, &#8220;to prepare us for living out here where extreme weather conditions can mean the difference between life and death for the unprepared.&#8221; Lazar is with the 3rd Marines&#8217; Marine Security Element.

Northern Edge, set to end Wednesday, is an annual joint training exercise involving the Marines, Navy, Air Force, Army and Coast Guard. &#8220;It&#8217;s nice to know the different military services are focusing on helping each other more,&#8221; Lazar said. &#8220;This integration is nice. I like it.&#8221;

1st Lt. Justin Bellman, a 3rd Marines platoon commander, said his unit conducted anti-terrorist training with the Anchorage SWAT team and Army Special Forces in Anchorage before arriving up north. &#8220;Not only was I impressed with the Army but also with how the civilian SWAT team all worked so well together,&#8221; he said.

&#8220;The mosquitoes in Alaska are amazingly resilient,&#8221; said Air Force Tech. Sgt. Scott Archer, with the 354th Medical Operations Squadron Public Health Department at Eielson Air Force Base. &#8220;You would think that frigid winters would kill them but they do not. They simply lie dormant until spring or until there is a water source.&#8221;

The mosquitoes are teeming this year, he said, in part because last winter&#8217;s heavier-than-usual snowfall left more water on the ground when the snow melted.

Elsewhere in Alaska, Marines faced other challenges &#8212; some of them pleasant.

Working in an Air Force dining hall on Elmendorf Air Force Base &#8220;is a nice break,&#8221; said Pfc. Daniel Povey. The mess specialist from the Okinawa-based Marine Wing Support Squadron 172 was expecting to work in his normal field environment, stated a Northern Edge &#8217;04 news release: in a tent, amid hulking green food canisters and portable gas stoves.

He especially likes the eight-hour days preparing breakfast and lunch beside civilian food workers and airmen. A typical day in the field can last 14 hours or more, he said. &#8220;That&#8217;s being on my feet constantly, serving the troops and maintaining all the other duties of a Marine outside my MOS&#8221; or military occupational specialty.

On the flight line, Marines were encouraged by how the different services worked together.

&#8220;I haven&#8217;t seen an exercise like this before with such interoperability,&#8221; said Marine Capt. Richard Allain, a pilot with Marine All-Weather Fighter Attack Squadron 225, Marine Corps Air Station Miramar, Calif.

&#8220;We are moving toward joint theater and standardized operations to put us all on the same page,&#8221; he told public affairs specialists covering the exercise. &#8220;It is important for all the different military services to work together and Northern Edge is designed to facilitate just that.&#8221;

Allain noted that worldwide mission requirements have kept his F/A-18D Hornet fighter squadron away from home for extended periods. &#8220;We have had five deployments within the last five years,&#8221; he said &#8212; a schedule that&#8217;s kept the Marines in charge of maintaining the jets on their toes.

One of the jets the maintenance crew kept in operating condition was used by Brig. Gen. Duane D. Thiessen to tour Northern Edge venues to meet his troops. Thiessen took command of the 1st Marine Aircraft Wing earlier this month.

&#8220;I&#8217;m glad to be here with my Marines,&#8221; he said during a stop at Eielson. &#8220;There are very few places that can provide the type of training Alaska does. The skill training with the different services gives us a chance to hone our skills and improve interoperability.&#8221;