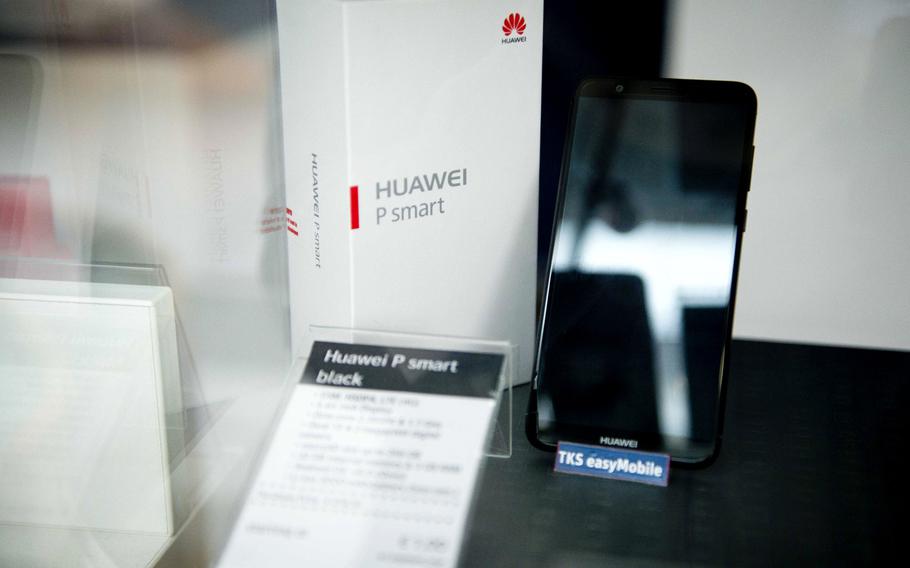 A Huawei smartphone on display at the TKS store at Ramstein Air Base, Germany, on Friday, April 20, 2018. ()

KAISERSLAUTERN, Germany — The three military exchange services pulled all smartphones made by Chinese electronics manufacturers Huawei and ZTE from stores around the world and banned their sale because of the security risks the devices pose, the Pentagon said Wednesday.

The Defense Department’s undersecretary for personnel and readiness issued a ban of “all Huawei and ZTE cellphones, personal mobile internet modems and related products from locations worldwide,” DOD spokesman Maj. Dave Eastburn said an email to Stars and Stripes.

“Given the security concerns associated with these devices, as expressed by senior U.S. intelligence officials, it was not prudent for the Department’s exchange services to continue selling these products to our personnel,” Eastburn said. He added that DOD is “evaluating the situation” to see if any additional security measures are needed, including an outright ban on use of the phones by servicemembers.

Stars and Stripes first reported last week that an Army and Air Force Exchange Service concession at Ramstein Air Base, Germany, had been selling the mobile electronic devices on base. The products were also found for sale at U.S. bases in other overseas locations.

In February, the director of national intelligence, along with the heads of the CIA, FBI, National Security Agency, Defense Intelligence Agency and National Geospatial-Intelligence Agency all testified before a Senate committee that Americans should not use Huawei or ZTE products because of security concerns.

The concern about Huawei first focused on routers, switches and other high-bandwidth commercial products; it later expanded to consumer mobile phones. They are already banned for official government use in most cases.

Huawei has been the target of numerous U.S. regulations and laws meant to address national security concerns, such as a 2013 law that required federal law enforcement agencies to sign off on certain purchases of its products by government agencies.

Huawei spokesmen have repeatedly denied claims the company’s devices pose any security risks. Huawei phones are used commonly throughout Europe, and the company is in the middle of a worldwide promotional campaign for its latest phone series, the P20, released last month.

Still, the Chinese devices “may pose an unacceptable risk to (the) department’s personnel, information and mission,” Eastburn said.

New rules proposed by the Federal Communications Commission would bar U.S. telecommunications companies that receive FCC subsidies from buying products from foreign companies with security concerns. Companies have yet to be named, but Huawei and ZTE are both expected to make the list of banned manufacturers. A bill introduced in January by Rep. Michael Conway, a Republican from Texas, would make it illegal for U.S. government contractors to use any Huawei equipment.

Huawei also makes personal mobile Internet modems, called “pucks,” which in recent years have been sold to U.S. troops at a coalition base near Irbil, the capital of Iraq’s Kurdish region. Some soldiers may have purchased similar devices made by ZTE.

ZTE was sanctioned by the U.S. government for violating trade embargoes by sending U.S.-made components to Iran inside its devices. Huawei is currently the subject of a similar investigation by the Justice Department.

Eastburn said the Pentagon deferred to command officials for additional guidance on operational security matters, but he said troops should watch out for news of potentially compromised electronics.

“Servicemembers should be mindful of the media coverage about the security risks posed by the use of these devices, regardless of where they were purchased,” he said.