Exchanges have shoplifters in sights 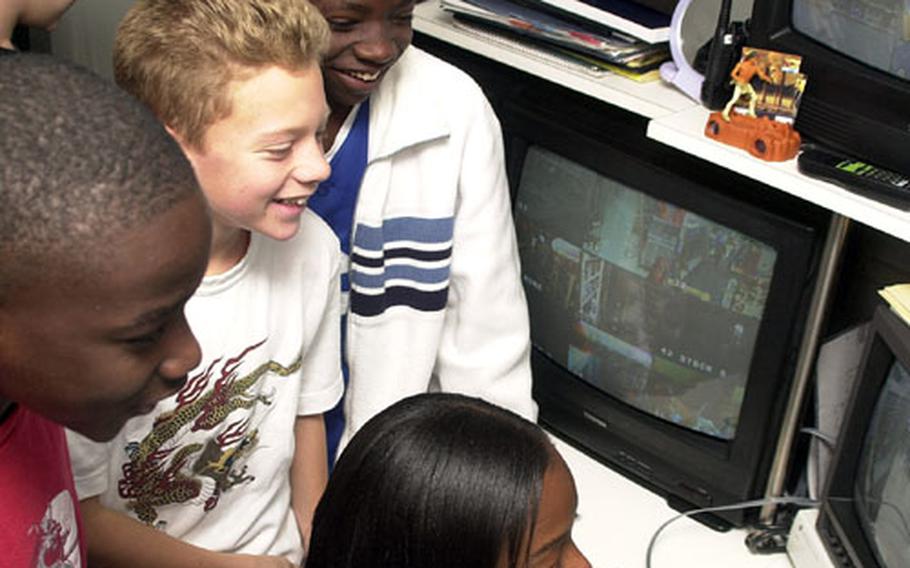 People who shoplift from base exchanges stand a good chance of getting caught, said Keith Boettiger, safety and security manager for the Army and Air Force Exchange Service, Pacific region.

AAFES officials claim they catch between one in eight and one in 10 people who shoplift.

Those numbers are good compared with the 1-in-35 to 1-in-50 apprehension rate at stateside stores, said Charles Sennewald, a former deputy sheriff in Los Angeles County and now a security management consultant and author.

With the peak shoplifting season in full swing just before Christmas, AAFES officials representing Pacific region stores in South Korea, Japan, Okinawa, Guam, Hawaii and Alaska are stressing the folly of shoplifting, pointing out that military exchanges are armed with a plethora of surveillance cameras.

On Okinawa, security personnel at Camp Foster&#8217;s exchange, with 47 cameras, and Kadena Air Base, with more than 50 cameras, closely monitor activities inside the stores. AAFES and Navy Exchange stores around the Pacific carry similar numbers of cameras.

Worldwide, AAFES personnel typically catch more than 11,000 shoplifters each year, recovering roughly $1.5 million of an estimated $15 million in merchandise stolen each year, according to a release on the Defense Department&#8217;s Web site at www.defenselink.mil.

In 2000 and 2001, Navy exchanges reported 3,008 shoplifting incidents worldwide involving $314,329 in merchandise, according to a Navy Times report.

Over that same span, AAFES security personnel on Okinawa apprehended 179 shoplifters, recovering $34,716 in merchandise. Pacificwide, they busted 941 individuals and recovered $78,560.

&#8220;In a community of that kind, where exposure is really devastating to the military&#8217;s image, those are incredible numbers,&#8221; said Sennewald, a veteran of the Korean War who served as an Air Force security policeman from 1949 to 1953.

Sennewald&#8217;s knowledge about shoplifting comes from serving as a deputy sheriff with the Los Angeles County Sheriff&#8217;s Department, the chief of security for Claremont Colleges, Calif., and as a security manager for the Broadway department stores. He&#8217;s written five books, including &#8220;Shoplifters vs. Retailers: The Rights of Both.&#8221;

Sennewald estimates roughly 5,400 people a day, or close to 2 million people a year, are detained for shoplifting in the United States, based on figures he compiles from law enforcement officials for his security management consulting firm. Estimates vary, he said, but U.S. shoplifters steal easily in excess of $10 billion in merchandise each year.

Shoplifters Alternative, a division of Shoplifters Anonymous, an educational rehabilitation program and support service, also reported that shoplifting is a $10 billion problem in the United States.

Though AAFES&#8217; data was small in comparison to the United States, Sennewald said he was &#8220;truly amazed&#8221; at the number of individuals military store officials busted for shoplifting.

&#8220;When it&#8217;s happening to the extent it is in a cloistered military community overseas, it just further confirms that shoplifting is a compulsive behavior that is currently beyond the control of our society.&#8221;

Foster&#8217;s camp commander, Col. Glenn Wagner, said he wants to &#8220;prevent shoplifting, before it becomes an embarrassing issue for someone&#8217;s dependents or an active-duty member.&#8221;

In a recent monthly newsletter, Wagner noted that every weekday around 3 p.m., many youths congregate at Foster&#8217;s exchange area.

&#8220;One thing leads to another, and next thing you know, someone does something they will later regret,&#8221; he said, adding that store agents know certain youths by face and name and pay close attention to them.

But Wagner told Stars and Stripes &#8220;shoplifting at Camp Foster is not at crisis levels and not every student that hangs out at the PX is a shoplifter.&#8221;

From cases he has seen, Boettiger said kids often feel peer pressure from shoplifting friends. Others do it as part of an initiation into a group they want to join. Some kids get greedy, he said, and take what they can&#8217;t afford. Some just want to see if they can get away with it.

He stressed, though, that the shoplifting problem is not just with children. It&#8217;s across the board with youths as well as young servicemembers and dependent spouses, he said.

Boettiger declined to give a demographic breakdown of those caught shoplifting at AAFES stores.

The Navy Exchange Service Command announced in November that it was linking up with Shoplifters Alternative, a nonprofit provider of shoplifter research and rehabilitation programs, to offer the Youth Educational Shoplifting program to all juveniles apprehended for shoplifting in Navy Exchanges. The service gives offenders a wake-up call and addresses the root cause of their behavior and its negative impact on their life. SA provides education programs and support services to 30,000 shoplifters each year.

Sennewald, who hosts his own Web site at www.shoplifting.com, said children are more likely than adults to talk openly about their shoplifting exploits.

During a tour at Kadena&#8217;s exchange, Boettiger gave junior high students from Okinawa&#8217;s Lester Middle School a briefing on shoplifting and a tour of the store&#8217;s security system. When he asked if anyone knew somebody who shoplifted, 16 of the 21 students raised their hands.

Asked if they knew the newest method of shoplifting, several students said people take price stickers off items and carry them out of the store without paying.

One student mentioned Hollywood actress Winona Ryder&#8217;s technique of taking items into a dressing room, cutting off the tags and stuffing them in bags to carry out of the store. In early November, Ryder was convicted of stealing $5,500 of merchandise from a Beverly Hills Saks Fifth Avenue store. Earlier this month, a court sentenced the actress to 480 hours of community service and roughly a $10,000 fine that included restitution of $6,355 to Saks.

Boettiger told the children that police and security guards know all the tricks of the trade.

After the brief, Boettiger took the children to a security room, where a detective monitored screens showing images from approximately 50 cameras throughout the store. The children took turns manipulating the control toggles to zoom the cameras in and out. They could watch customers fill out checks at the checkout stands.

Although there are no cameras in dressing rooms, Boettiger told the children, the store&#8217;s security agents have ways to track what customers take and remove from booths. He did not elaborate on those techniques.

Seventh-grade teacher Sue Fitzpatrick said the exchange field trip was meant to be an eye-opener. She said it also likely would benefit other students at Lester, since she expected her pupils to tell their friends what they had learned.

Not only do shoplifters suffer embarrassment, they are arrested and taken to the police station. Some have lost scholarships and admission to prestigious colleges and military academies, the security manager told the children.

If the theft involves a military member, they go through the military system, including possible court-martial, Boettiger said.

Non-military members caught shoplifting at Kadena go before the Kadena Disciplinary Board; those nabbed at Marine Corps bases in Japan go before Base Inspector Col. Michael Dyer, at Camp Foster. He said sanctions toward military dependents or civilian employees are varied.

They include verbal or written warnings; restriction to base or quarters; suspension of identification-card privileges; requirement to write an essay; community service supervised by the sponsor or parent; early curfew; probationary debarment from all Marine Corps property; debarment from all Marine Corps property with request for reciprocal action from other services; early return of the family member to the United States; and return of the sponsor and entire family to the United States.

Steve Bass, AAFES&#8217; chief of loss prevention for the Pacific region, said recent legislation under the Civil Recovery Program now allows military exchange officials to fine shoplifters, including the parents of juveniles who shoplift, a $200 administration charge to recoup the costs associated with theft prevention, detection and apprehension. This is in addition to the money shoplifters must pay for the value of the items stolen. He said the program is separate from criminal prosecution or disciplinary action and may act as an added deterrent.