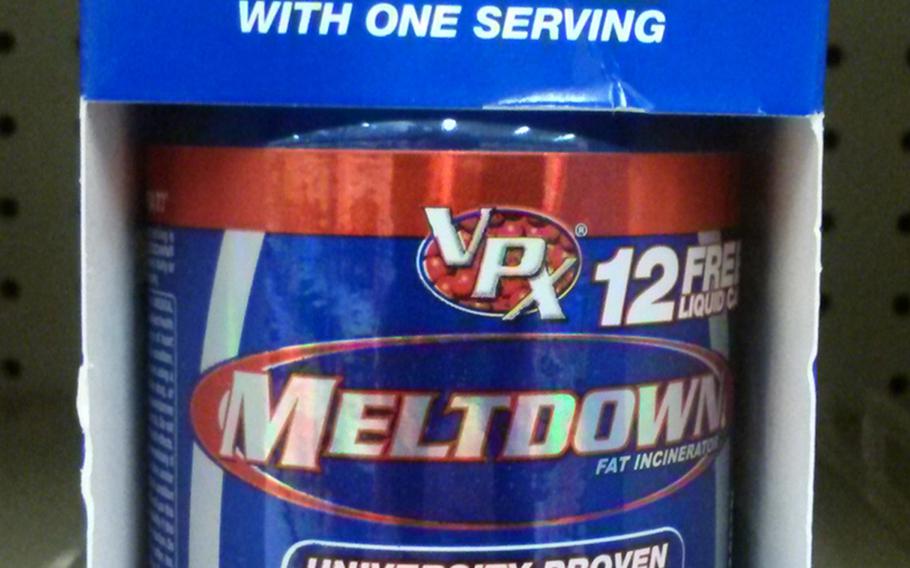 WASHINGTON — Exchange stores at military bases around the world again pulled fitness supplements from shelves earlier this month after concerns they contained a potentially dangerous and untested stimulant.

The recalls might be triggering déjà vu among troops.

Nearly three years ago, the same stores removed a variety of other supplements containing the previously obscure stimulant DMAA after reports of soldier deaths. The families of two soldiers who died after taking the products in 2011 have sued and those cases are heading toward trial.

Now, a study published Oct. 8 found the substance causing the latest military recalls, DMBA, closely mirrors the effects of DMAA as well as its name. The familiar spate of new product recalls and published research shows the military’s struggles with potentially dangerous fitness supplements may be far from over.

“We are seeing the same style [as with DMAA] … multiple companies are introducing these brand new stimulants that have never been tested,” said Pieter Cohen, a doctor and assistant professor of medicine at Harvard University who has studied the stimulants extensively.

At least a dozen supplement products were found to contain the new synthetic stimulant, which has unknown effects and could pose significant health risks, according to a study co-authored by Cohen and published in the Journal of Drug Testing and Analysis.

The Army and Air Force Exchange Service said it pulled the weight-loss supplement MD2 Meltdown on Oct. 14 and Marine Corps exchanges reported removing it a day later due to concerns over DMBA.

Supplement giant GNC, which operates outlets on many military bases, removed that product and two others called Redline White Heat and OxyTHERM Pro this month, the exchange services said.

The Navy Exchange said it does not sell any of the products that tested positive for DMBA.

Companies have sought out new stimulants after the Food and Drug Administration pressed for the DMAA products to be eliminated following a rash of health problems beginning with the soldier deaths in 2011, Cohen said.

The military services and their exchange stores have struggled in the past to keep up with the variety of potentially dangerous substances that have hit the market in recent years. Supplements are largely unregulated by the FDA and ingredients are self-reported. Recalls typically occur only after reports of health problems from the public.

Bodybuilding and weight-loss supplements are highly popular among troops who are often under intense pressure to stay fit — on-post retail sales ring in at about $190 million per year and about 250,000 servicemembers use products considered to be high risk for side effects.

Last year, a supplement containing a designer drug similar to methamphetamine was not recalled from military shelves until months after initial reports of the dangers.

In the case of DMBA, it appears the services moved more quickly.

The stakes can be high and fallout from potentially dangerous supplements can stretch out for years.

Retailer GNC and a maker of DMAA products, USPlabs, recently settled a class-action lawsuit in Florida, reportedly paying out $2 million to consumers.

But the families of Pvt. Michael Sparling and Sgt. Demekia Cola, who both died at Fort Bliss, Texas, after taking the supplements in 2011, are still waiting for their day in court.

“We’re just really racing toward trial. The Sparlings are really looking forward to telling their story in court,” said Anne Andrews, a California attorney who also represents Cola’s family. “They want the world to know a young soldier died because of a dangerous product sold at GNC.”

Sparling, 22, took the bodybuilding and weight-loss supplement Jack3d just before a 3½-mile run with his new unit in summer 2011. He collapsed, lost consciousness and began foaming at the mouth.

He was pronounced dead several hours later at a nearby hospital.

His parents believe DMAA directly contributed to their son’s death and that it could kill or seriously injure some users even at recommended doses. They sued GNC and USPlabs and created a foundation in their son’s name to educate the public on the dangers of supplements.

Their case is set to be heard in a Texas court in June.

A lawsuit against the companies was also filed by Cola’s mother. The sergeant experienced muscle breakdown and heatstroke in late 2011 after taking a DMAA product. She suffered with complications for more than a month and died while waiting for a liver transplant, according to the court filing.

Both GNC and USPlabs declined to comment on the lawsuits.

They have repeatedly denied DMAA products pose a health risk.

A spokesman for USPlabs referred Stars and Stripes to a Department of Defense safety review two years ago that could not determine DMAA caused four reported soldier deaths but did find the substance might have endangered thousands of troops.

A GNC spokesman issued a statement saying, “GNC fully complies with all federal, state, and local laws and regulations with respect to the sale of dietary supplements, including those governing ingredients.”