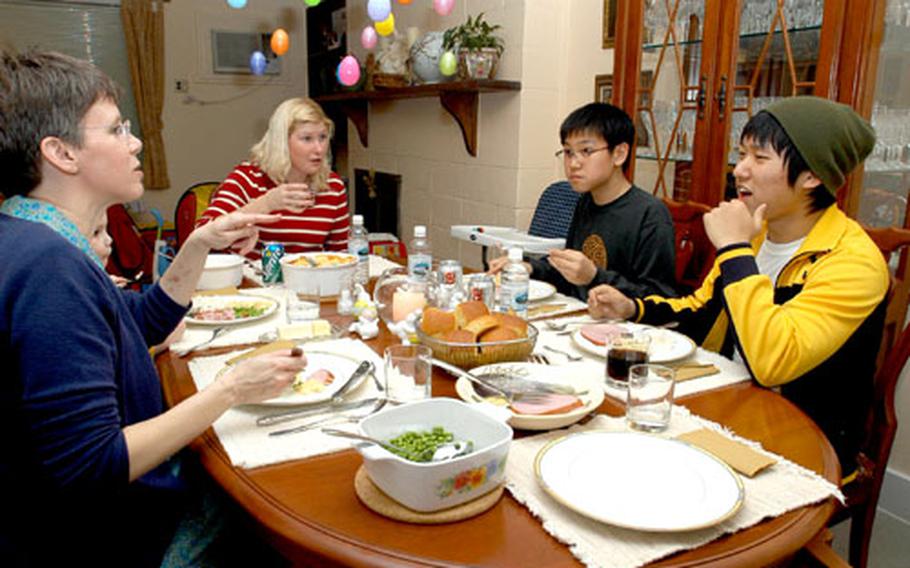 A Pizza Hut pie costs about $24 in Seoul. Having chickens as apartment-dwelling pets in Itaewon is definitely uncommon. Putting cinnamon and sugar on rice &#8212; and milk &#8220;for dessert?&#8221; &#8212; is just as unappetizing to these high school boys as plain, white rice is to the two American women.

Lt. Col. Lisa DeVine and her guests, Capt. Erica Iverson, Kim Dong-woo and Kim Kyu-jin, laughed their way through dinner as they exchanged questions and answers about what life is like on either side of the wall that separates Yongsan Garrison and Seoul.

The Korean boys were shocked to hear a recipe for rice pudding. Iverson, who along with DeVine works in Gen. B.B. Bell&#8217;s speechwriting office, was equally surprised to learn her neighbor&#8217;s habit of rearing poultry is odd to other city-dwellers as well.

Their dinner was part of a weeklong program that invited South Korean high school students to spend their days with American teens and their nights with military families on Yongsan and Osan Air Base. Seventy-nine teens, mostly 10th-graders, participated and got a first-hand look at American military life while practicing their English for five days.

Both Dong-woo and Kyu-jin, who is 16, have been studying English since they were first-graders. But neither has ever traveled to an English-speaking country. On Tuesday, they entered Yongsan Garrison for the first time.

They both expected to see barracks and weapons. Instead, they said, they were surprised to see swing sets and houses with yards. They stayed with DeVine and her husband, Col. Tom DeVine, where each boy had his own bedroom, a basket full of American snacks and a backyard to play ball in.

During the week, the students attended classes at Seoul American High School, watched Army medics train at the 121st General Hospital and saw &#8220;The Last Holiday&#8221; at the base theater. Dong-woo ordered his first Whopper at Burger King, which was so big he took it apart to eat it.

The week also included a trip to the Demilitarized Zone and a night at a local restaurant, where Seoul American students were to learn about Korean dining customs.

But the exchange also allowed insights on more than just serving sizes and utensils, both boys said.

Dong-woo said he was excited to make friends with kids of different races, and most of the friends he hung out with were black. He also said he noticed how people of different skin tones treated each other differently in school.

Kyu-jin&#8217;s school is all-male, and he noticed immediately how relaxed boys and girls acted around each other when compared with his own friends.

Dong-won said he had many friends who dislike the U.S. military&#8217;s presence in South Korea, and he included himself before this week. He said part of those feelings stem from knowing so little about life inside U.S. bases.