A collection of artifacts discovered during an excavation of a site where a British developer is building American-style homes adjacent to RAF Mildenhall. On top left, pottery. On bottom left, building material for a home. On right, cattle bones. In the two bags in the middle is a medieval belt buckle and a Roman coin. (Bryan Mitchell / S&S)

A collection of artifacts discovered during an excavation of a site where a British developer is building American-style homes adjacent to RAF Mildenhall. On top left, pottery. On bottom left, building material for a home. On right, cattle bones. In the two bags in the middle is a medieval belt buckle and a Roman coin. (Bryan Mitchell / S&S) 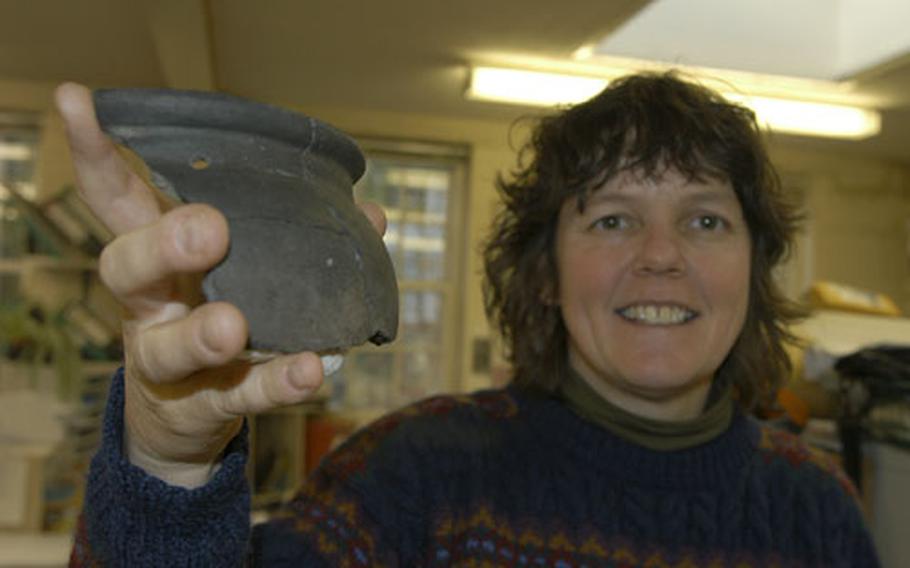 Suffolk County Council archaeologist Jo Caruth holds a piece of 1st Century cooking pottery that predates the Roman period of British history. The pottery was excavated from a site on Beck Row where a developer is building American style homes. (Bryan Mitchell / S&S)

RAF MILDENHALL &#8212; British archaeologists have found ancient pottery and house-building material predating the Roman Empire&#8217;s expansion into this area of England in a tract of land being developed into American-style homes just off base.

Archaeologists working for the Suffolk County Council have excavated half a cooking pot, several pieces of clay housing material and cattle bones from the site.

Caruth and fellow Suffolk archaeologist Cathy Tester have been working out of their Bury St. Edmunds office to catalog the nearly 2,000-year-old findings, as well as what appears to be a belt buckle and a Roman coin found in the same area.

Caruth said that while Romans had not established permanent settlements in Suffolk as early as 50 A.D., they were active in Britain during that period.

Caruth said the recent findings add to the already strong body of evidence that a fairly sophisticated settlement existed well before the arrival of Romans in what is now Beck Row. The artifacts were uncovered in December during a pre-construction excavation that is required of all projects in the county.

During a similar excavation in 1999 before the construction of another set of American-style homes, Caruth and her staff uncovered archaeological remains of a barn that measured about 72 feet long by 30 feet wide.

&#8220;We think all of this represents an intense agricultural system and that the barn was probably used for processing and storage,&#8221; Caruth said. &#8220;The land there, between Mildenhall and Lakenheath, is very unique in the county in that it&#8217;s on the edge of the fens and very good farmland.&#8221;

Caruth said the presence of the American military around Mildenhall and Lakenheath has proven a boon for local archaeologists.

&#8220;We probably know more about that area of the county than any other because the Air Force does so much development that we are always out there digging it up,&#8221; she said.

Ten years ago archaeologists working on RAF Lakenheath uncovered what is described as a &#8220;Saxon warrior&#8221; that drew interest nationwide.

Caruth has applied with the developer, Anthony Warin, owner of the Smoke House Restaurant and Hotel, to conduct a full excavation of the land prior to the construction of the development.