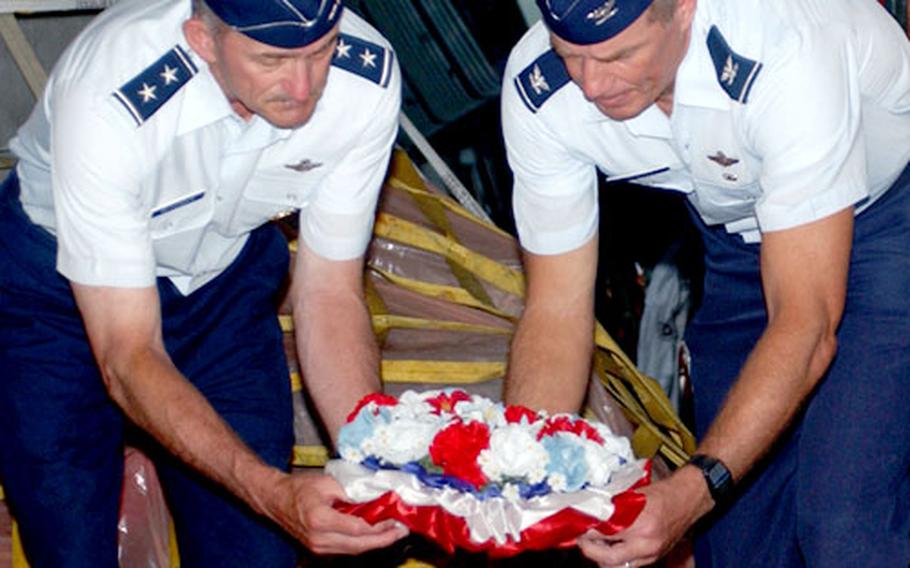 A former Vietnam POW is ending his 40-year military career by helping bring closure to families of loved ones who never came home from the war.

Air Force Reserve Maj. Gen. Edward J. Mechenbier returned to Hanoi, Vietnam, last week to pick up two sets of remains believed to be those of his fallen comrades. He piloted the same plane that rescued him 31 years ago, an Air Force C-141 Starlifter &#8212; dubbed the &#8220;Hanoi Taxi&#8221; by the freed prisoners it carried home on Feb. 12, 1973.

&#8220;This is the most professionally and personally gratifying mission that I&#8217;ve ever had,&#8221; Mechenbier said this week by phone from Hawaii. &#8220;If you look at my own personal experience, I spent almost six years in jail. To a lot of people, that sounds like a pretty tough duty assignment.&#8221;

But Mechenbier, 61, considers himself lucky: He came home and 31 years later has the chance to help families close a painful chapter in their lives, he said.

Assigned to the 445th Airlift Wing at Wright-Patterson Air Force Base near Dayton, Ohio, Mechenbier is the last Vietnam-era POW in the U.S. military and the oldest pilot still flying.

A C-141 flight crew of 25 departed Wright-Patterson on May 22, stopping in California, Hawaii, Guam and Thailand before landing in Hanoi on Friday to pick up two aluminum cases draped in American flags.

Mechenbier was shot down June 1967 in his F-4C Phantom II fighter while on his 80th mission. The then-24-year-old first lieutenant was bombing Vu Chu railroad marshaling yards about 30 miles northeast of Hanoi. He was held captive for six years inside Hoa Lo prison, nicknamed the &#8220;Hanoi Hilton&#8221; by POWs.

Though Hanoi&#8217;s city landscape of modern buildings and motorbikes looks vastly different now, the general recognized a few landmarks from the air, such as Old Thud Ridge and prominent bends in the Red River.

Nostalgic? Maybe, he said. But the task at hand elicited more emotions than memories of his Vietnam days, he said.

&#8220;To see the two governments cooperating to bring closure to the status of these missing Americans, I found that to be really awesome,&#8221; he said.

Mechenbier said he has friends who never came home from the war. He&#8217;s a strong proponent of continuing the mission of searching for soldiers still unaccounted for from any conflict.

&#8220;It tells the world we care about our people; it tells our people that our Air Force and our government care about them, and it tells the family members who offered their husbands, wives and children that they&#8217;re not forgotten,&#8221; he said.

About 1,800 servicemembers remain missing from the Vietnam War, which ended in 1975.