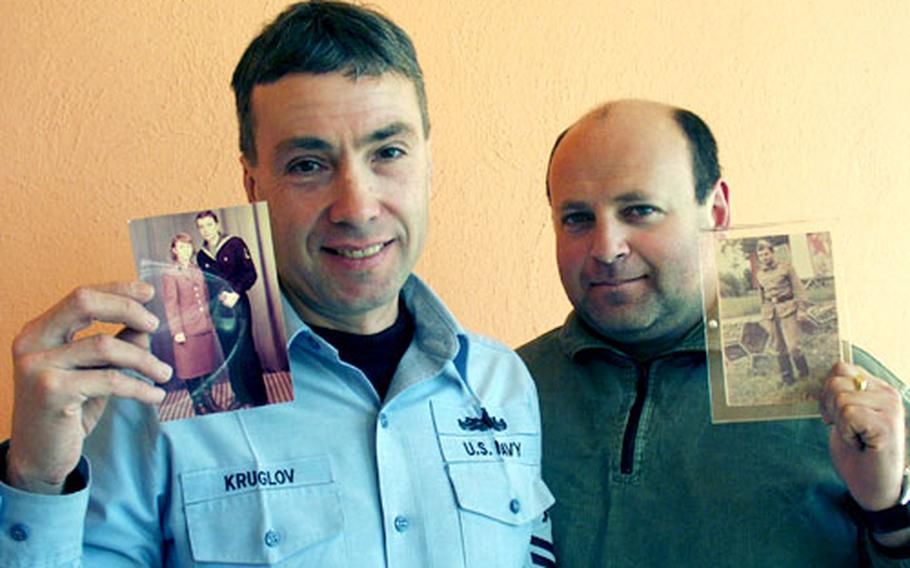 Petty Officers 1st Class Sergey Kruglov, left, and Vadim Gudin, both with the Naval Support Activity in Naples, Italy, hold up photos from when they served in the Soviet military in the 1980s. (Jason Chudy / S&S)

Petty Officers 1st Class Sergey Kruglov, left, and Vadim Gudin, both with the Naval Support Activity in Naples, Italy, hold up photos from when they served in the Soviet military in the 1980s. (Jason Chudy / S&S) A picture of then-Soviet naval academy cadet Sergey Kruglov and his sister, Larisa, who was in the Soviet Army. Larisa recently retired from the Russian Army after about 18 years of service, rising to the equivalent rank of a chief petty officer. Sergey Kruglov is now a petty officer 1st class at Naval Support Activity Naples, Italy. (Courtesy of Sergey Kruglov) 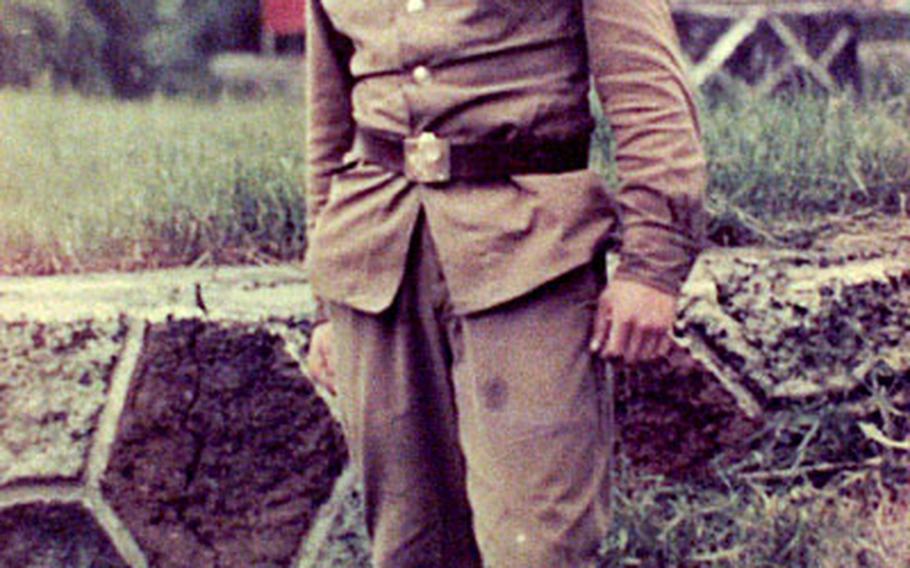 Gudin, a former Soviet Army tank driver, was trained to defend against a seaborne invasion by enemy naval forces. Kruglov, who did six years as a naval academy cadet, trained to fight as a navigator on a submarine.

In each case, they were training to fight the U.S. Navy.

Now, both Russian natives are serving in that same U.S. Navy at Naval Support Activity Naples: Gudin as a security patrolman and Kruglov as the assistant leading petty officer in the chief master-at-arms office.

Gudin started his military career as a conscript in the Soviet Army between 1986 and 1988, serving in the Russian Far East.

Kruglov did his mandatory service as a cadet at the high engineering marine academy in the Black Sea port of Odessa between 1981 and 1987. There, he earned a reserve lieutenant&#8217;s commission and a degree as a merchant mariner.

Kruglov joined a merchant ship in the Soviet Far East and later another back in the Black Sea, eventually rising to second mate before the collapse of the Soviet Union. After that fall, Kruglov worked for Greek and German shipping companies before &#8220;winning&#8221; a U.S. green card in 1995. He moved from Odessa to San Francisco that July, but his stay there didn&#8217;t last long.

He had seen two American warships while serving as a cadet &#8212; a frigate in the Persian Gulf and an aircraft carrier in the Suez Canal.

Both said that the conscripted Soviet military and all-volunteer U.S. force are worlds apart.

Gudin first enlisted in 1993, serving six years as a machinery repairman in San Francisco and Everett, Wash., before leaving active duty for the Reserve.

He was recalled to active duty in Oct. 2001 while working as a computer programmer.

He&#8217;s since decided to remain on active duty and also changed jobs to become a master-at-arms, the Navy&#8217;s security police.