Ex-Sen. Brown thinks he could be VA secretary 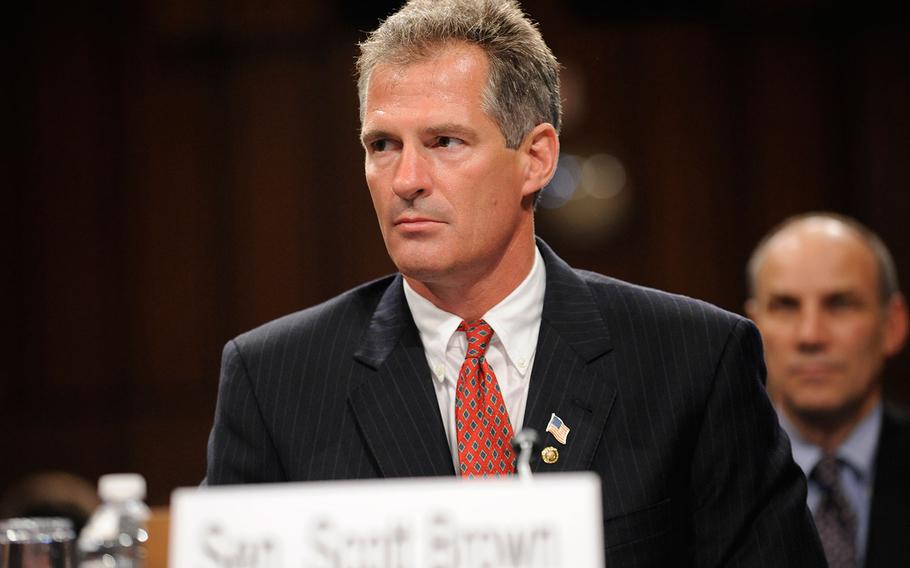 WASHINGTON — Scott Brown, a former Republican senator from Massachusetts, said he felt confident about his chances to be selected the next secretary of the Department of Veterans Affairs after meeting with President-elect Donald Trump on Monday.

“[Trump and I] had a relationship prior to the election,” Brown said in a telephone interview with Stars and Stripes. “We speak frankly to each other. It was no mystery — he knows my feelings and position on veterans and the military.”

Trump and his transition team have started meeting at Trump Tower in New York with candidates under consideration for Cabinet positions. While the team hasn’t confirmed who is being eyed for VA secretary, Brown, Rep. Jeff Miller, R-Fla., and others have emerged as potential candidates.

Brown said he has begun forming plans for the department, including one to fire VA leaders who don’t immediately divulge the problems at the facilities that they manage.

“Let’s say I call up a hospital with my inspection and evaluation team and say, ‘Mr. Administrator, I need to know what’s going on, what the problems are, where the skeletons are buried, and you’re going to get a free pass — no fingers pointed, no issues — just tell me where everything is,’ ” he said. “If you don’t tell me, then you’re fired.”

Brown admitted the plan isn’t fully formed, but he’s “thinking a lot about it.”

“If people are not doing their jobs appropriately, they need to be held accountable,” he said.

Brown’s vision fits in with Trump’s campaign proposal to give greater authorization to fire more federal workers. The president-elect has made disciplining or firing poor-performing VA employees part of his 10-point plan to reform the scandal-ridden agency.

Miller, who is chairman of the House Committee on Veterans’ Affairs, has been one of the department’s most outspoken critics. He’s challenged VA Secretary Bob McDonald and other agency leadership repeatedly during the past two years on various issues, including greater accountability from senior executives.

It’s the “number one problem,” Miller wrote in a statement Monday.

“We think the biggest initial policy needs to be a reform of VA personnel policies, in particular how the VA fires bad employees,” said Dan Caldwell, vice president of communications for Concerned Veterans of America, a conservative advocacy group that is part of Trump’s transition team and linked to billionaires Charles and David Koch. “That’s an absolute first-100-day priority.”

Who’s being considered Trump’s transition team has not confirmed who is in the running for VA secretary and the team did not respond Tuesday to a request for comment.

Brown said Trump reached out to him to discuss a Cabinet position and that Monday’s meeting “went very well.”

Brown has worked as a Fox News Channel political contributor in recent years and endorsed Trump on-air after the New Hampshire primaries in February.

During the summer, Trump said he would consider Miller as VA secretary, The Associated Press reported at the time. As of last week, Miller said he hadn’t been contacted by Trump representatives.

“Right now, Chairman Miller is focused on being chairman of the House Committee on Veterans’ Affairs and representing Florida’s first congressional district,” an aide of Miller’s said Monday.

After 15 years as a lawmaker, Miller announced in March he wouldn’t seek re-election. If appointed VA secretary, Miller would be the first person who has never served in the military to hold that position.

Former Texas Gov. Rick Perry also might be considered for the job. Perry met with Trump on Monday and was being eyed for different Cabinet posts, including VA secretary, Bloomberg reported.

Brown’s background Brown said another priority would be preventing suicide among veterans, including improvements to the Veterans Crisis Line — though he didn’t offer specific actions.

“I’m thinking through a lot,” he said.

Brown, 57, was a member of the Massachusetts legislature from 1999 to 2004, serving in the house and then the senate. He was then elected in 2010 to the U.S. Senate after Edward Kennedy died in office. In 2012, he lost his senate seat to Democrat Elizabeth Warren.

Brown moved to New Hampshire and ran for Senate in 2014, but lost to Democratic incumbent Jeanne Shaheen.

That year, Brown also retired from military service after 35 years, ending his career as a Judge Advocate General in the Massachusetts Army National Guard. But he does not qualify as a veteran under the VA definition because he did not spend enough time on federal active duty, he said.

“It’s not like I fell off the turnip truck yesterday when it comes to understanding military,” Brown said. “It’s important to have someone with strong military credentials.”

Brown said he would likely find out after Thanksgiving whether he was appointed to the position.

“We don’t really know his ideas on VA reform. We hope he’s open to some of the reform we and the president-elect have been advocating for,” Caldwell said about Brown.

Priorities for veterans Communicating with veterans groups should be a priority for the next VA secretary, according to officials with two veterans service organizations.

“We’ve been very pleased with the secretary and his leadership team keeping us very engaged,” Campos said. “He and his team are very good about reaching out and getting the voice of the veteran. We — and my colleagues in other [veterans service organizations] — will continue to do our best to make sure that continues.”

Campos said MOAA wants greater collaboration between the Defense Department and the VA to help wounded, ill or injured servicemembers get treatment as they transition out of active duty. The organization is also advocating for a better process for veterans to appeal VA decisions on disability claims.

Gillums said he has concerns about Trump’s plan to expand options for veterans outside of the VA.

VA health care providers are “focused on the unique needs of veterans,” he said, and he’s worried paying for more outside care could bring the unintended consequence of eroding VA resources.

“He understands our concerns,” Gillums said. “He’ll have enough prior insight to have an informed conversation about this.”

“Leadership is going to do whatever they feel they can get away with,” he said. “We want to see less of that. From the secretary on down, everybody acknowledges that’s a problem but haven’t done anything to fix it.”