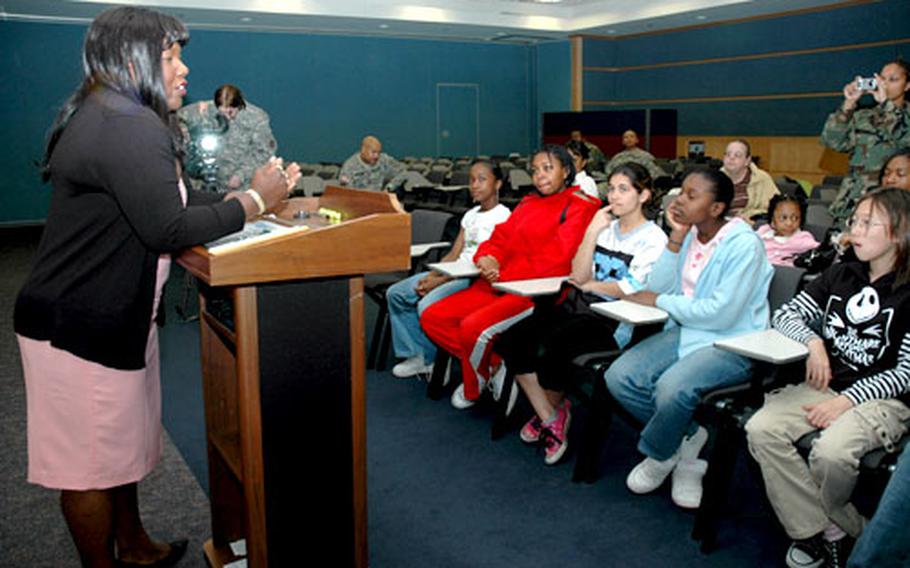 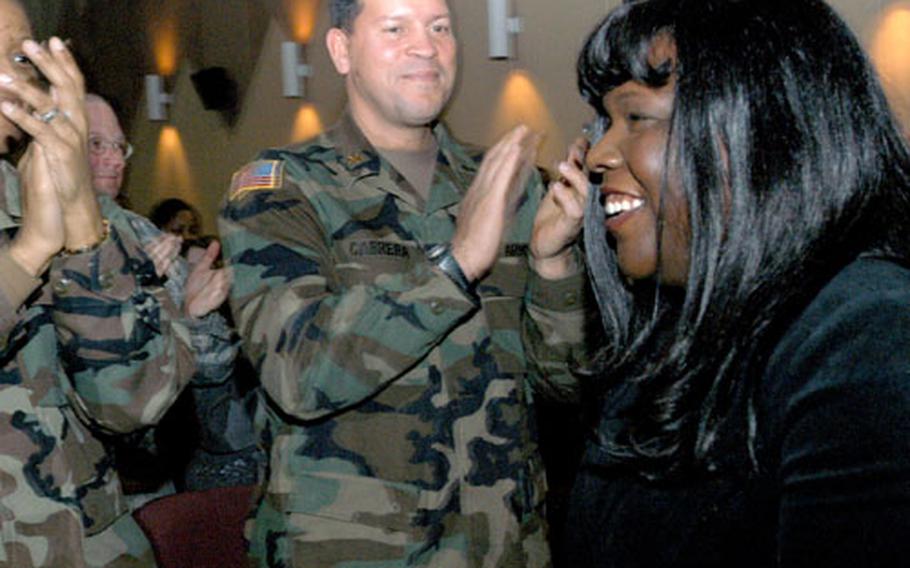 &#8220;If I could avoid being caught, I would,&#8221; she said matter-of-factly to smiles from 400 servicemembers, family members, workers and students on Yongsan Garrison on Tuesday afternoon. But would she join the U.S. Army, even though it meant going to war?

&#8220;I would do it all again,&#8221; she made clear to a spillover crowd at the movie theaters on Yongsan, where servicemembers stood lining the back wall in the main room and a second theater with a video hook-up drew another crowd.

Johnson, a retired specialist, was one of six soldiers captured on March 23, 2003, in Nasiriyah, Iraq, just days after the invasion began.

She and five other members of the 507th Maintenance Company were rescued 22 days later by U.S. Marines, and she would soon come to learn that she would forever be America&#8217;s first black female prisoner of war.

It is not a distinction Johnson signed up for, nor does she feel comfortable with all the attention she&#8217;s gained in the past three years.

Reporters ask nosy questions. Some people still speculate about jealousies between her and Jessica Lynch, another female POW captured at the same time, who garnered more attention. Johnson was shot during the ambush, and she has to sit during public talks.

But it&#8217;s hard for her to hide the relaxed comfort she finds in talking to a room full of servicemembers who know what it means to join the Army to jumpstart a career, then become a parent, then get orders to go to war.

Johnson, a native of Panama, grew up as a self-described Army brat. She decided to join the Army in the fall of 1998 to begin a career as a cook.

By February 2003, she had a daughter and orders to go to Iraq. She put her child in the care of her parents and tried to be optimistic. &#8220;I thought I&#8217;d get my Mustang,&#8221; she said to more laughter, referring to the way many servicemembers manage to save the bulk of their paychecks while deployed.

On March 26, she was shot and captured.

She said she relied on her leaders during the imprisonment. A senior soldier became the group&#8217;s spokesman, making decisions and demands on behalf of the group, Johnson said.

Johnson said she has no ill feelings toward Lynch, also a member of the 507th captured that day, and rescued in a separate raid earlier that April. By that fall, Lynch had a book deal with a Pulitzer-winning journalist and a made-for-TV movie.

Johnson since has retired from the Army and lives in Texas with her family. She earns money from talks about her experience and is taking culinary classes again.

And she has the sense of humor to see the good from her frightening ordeal. When asked if she ever got that Mustang, she said yes. &#8220;I got a good deal,&#8221; she confessed with a smile.